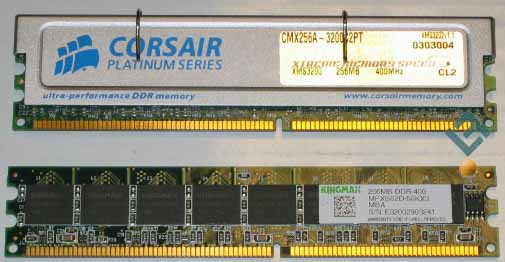 Now that you know what the features of the Kingmax MPXB62D-68KX3 RAM module is, I will show you how this RAM performs compared to Corsair’s PC3200C2 256mb module.

All tests were completed on the desktop with no other programs running. We used Windows XP SP1a with the nVidia 43.45 driver and the VIA Hyperion 4.46 4-in-1 driver. We compared the Kingmax 256mb DDR-400 module with the Corsair 256mb PC3200C2 module.

We found the max O/C of the Kingmax DDR-400 memory module to be 360 MHz DDR when the default of the RAM is supposed to be 400 MHz DDR. This was very surprising given that it is no where near what the specs advertise it to be. This RAM should be a DDR333 module!

The last graph we have was supposed to show these two sticks of ram at their default speeds of DDR-400, but since the Kingmax couldn’t get higher than DDR-360, we went ahead and compared it as close as it could to the Corsair at its default speed of DDR-400. As you can see there is a big difference in the 3dMark2001SE scores and in PCMark2002 Memory score.

Now that you have had the chance to see how this RAM performs, I will move on to my conclusion.