Intel 3D Xpoint memory is a non-volatile memory (NVM) technology announced by Intel and Micron in July 2015 and today we are finally getting to see that technology come to market in a data center SSD, the Intel Optane SSD DC P4800X! The Intel Optane SSD DC P4800X will be offered in both PCIe add-in-board and U.2 form factors, but for our article today we’ll be showing just the PCIe version.

Intel is very conservative when it comes to making bold claims, but they are calling this the ‘World’s Most Responsive Data Center SSD.’ The Intel Optane SSD DC P4800X is a low-latency drive with responsiveness all the time thanks to high-performance at low-queue depths. Intel believes that this drive will fit the bill when it comes to fast storage and caching as well as extending memory for larger data sets to be used in the workplace.

Let’s take a quick look at some of the key specifications of the Intel Optane SSD DC P4800X.

The Intel Optane SSD DC P4800X 375GB drive looks like a beast with 4kB Random speeds of up to 550,000 IOPS read and 500,000 IOPS write! The endurance on this drive is 30 drive writes per day or 12.3 Petabyts Written! Intel Optane drives using 3D Xpoint don’t need to be over-provisioned like NAND-based drives nor does any defragmentation need to be done. Intel does keep a very small amount of spare space available

Intel is specifying this drive a little different as they are now focusing on low Queue Depth performance and that is where this 3D XPoint drive really separates itself from traditional NAND SSDs in the enterprise market. Intel explained that most low depth matters and highlighted that most desktop PCs (client market) use queue depths of 1-4 on a regular basis and not much more than that. The data center is actually quite similar to this as most servers are running 2-6 VM’s on a server. Inside each of those VM’s are you have 1-2 threads and maybe Intel Hyper-Threading running and you’ll find out that most of the time you are at a QD of 16 or less for most all workloads. And, that is if all those workloads are accessing the storage at the same time and that is pretty rare. Intel noted that they are seeing most data center drives are being accessed between a QD of 4-8 and as SSDs or storage media in general gets faster, those queues get shorter as the workloads can’t keep up with the drives. This is pushing the queue depths down and in mixed workloads and low queue depths the Intel Optane SSD DC P4800X brings 5-8x more performance at those low queue depths. 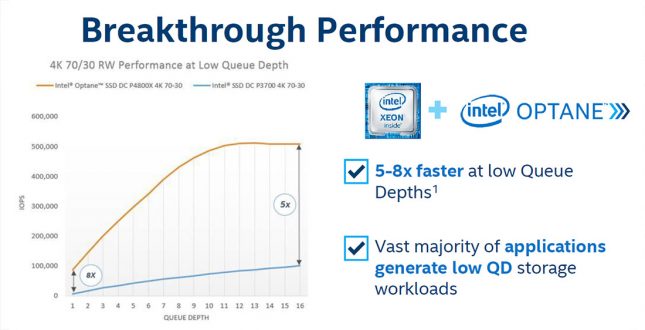 In the chart above Intel compared the new Intel Optane SSD DC P4800X with 3D Xpoint memory versus the Intel SSD DC P3700 with NAND on a 4K 70/30 mixed RW performance test at a QD of 1-16 and found that as a QD of 1 the Intel Optane SSD DC P4800X was 8x faster and then at a QD of 16 it was 5x faster, so while the maximum performance ratings of the drive aren’t insane, the numbers where Intel says it matter are dramatically different.

Intel is looking at a new concept of testing data center drives and the result of this is shown in the chart above. The scenario is a multi-tenet environment where there is a VM that is running a database and that database is being read from and you want it to be responsive. The problem is that other tenets are also accessing the same database and that impacts your responsiveness due to what they are wanting to d. The right hand xis is an offending random right workload (top stair step line) that steps up in time over the benchmark test. Intel then measures the latency of response of the reads. You got from latencies in the 175us to 800us range on the Intel SSD DC P3700 (blue line) and you can see the average read latency go up as the workload ramps up. The Intel Optane SSD DC P4800X (orange line) is 20us or less! Intel stopped the test at 750 MB/s because the Intel SSD DC P3700 couldn’t handle any more than that, but the Intel Optane SSD DC P4800X can maintain this performance up to 2GB/s if the chart continued that far. 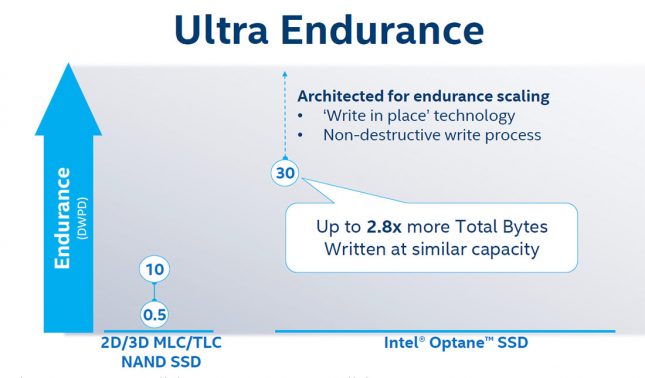 When it comes to endurance, the Intel Optane SSD DC P4800X is rated for 30 drive writes per day and that is a conservative number. This number works out to offering 2.8x more Total Bytes Written (TBW) when compared to the Intel SSD DC P3700. Intel picked 2.8x as they were using a Intel SSD DC P3700 800GB and the Intel Optane SSD DC P4800X 750GB, so there is a little difference in the capacity of the drives and that impacts the specification. 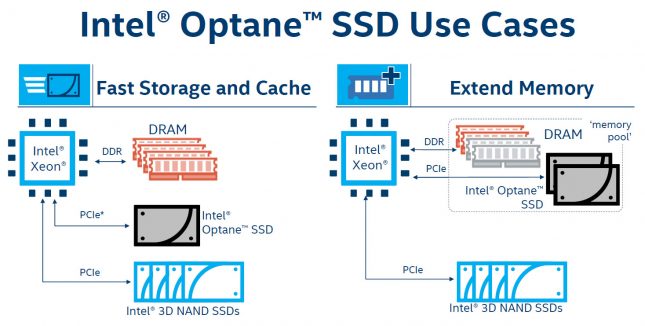 Where does Intel see Intel Optane SSD’s being used? Intel sees customers using this drive in a couple different ways: fast storage and cache or as extended memory. The fast storage and cache applications and in the data center that is where SSDs are being used today. You can drop this in and it can be cache or fast storage tier, where you put your database files, it is just another storage device that you can drop in and just start using. You can also use it to extend memory and that is gets a little more complicated with both the DDR and PCIe bus, but it can be done.

Intel showed an example where they had two MySQL servers configured and the database was too large to fit entirely inside the RAM. They then ran Sysbench 0.5 with a 70/30 RW split and found that that Intel SSD DC P3700 could only handle 1,395 transactions per second where the new Intel Optane SSD DC P4800X could handle to 16,480 transactions per second. That number is impressive since the only difference between the systems was the SSD and Intel shows that as a cost savings per transaction as you can see in the chart above. 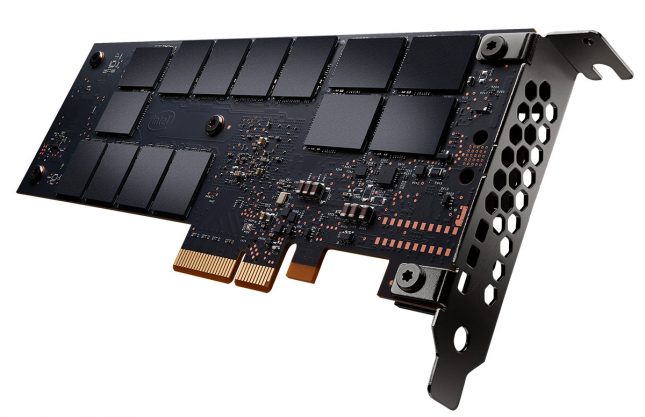 The Intel Optane SSD DC P4800X 375GB PCIe model is the only capacity that Intel is talking about today (besides the 750GB model they used in the endurance chart) and that drive will be priced at $1,520 or $4.05 per GB with limited availability today and broad availability in the second half of 2017. Intel will also be offering a 750GB version of the drive in Q2 2017 and then a 1.5TB drive in the second half of 2017. The U.2 version should start coming to market in the second quarter of this year with the 375GB model leading the way.

That price is nearly 3x the cost of the Intel SSD DC P3700 400GB Drive at $799.99 shipped, but you can see there are huge performance gains to be had. Now that Intel Optane SSDs have been released for data centers it is only going to be a short period of time until we see this technology come to the client side!