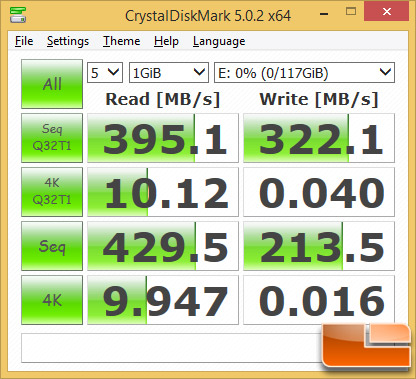 Benchmark Results: On our desktop PC that uses an ASUS X99 Sabertooth motherboard with Windows 8.1 we found that CrystalDiskMark showed that we topped out at 429.5 MB/s sequential read and 213.5 MB/s sequential write on the boards integrated SuperSpeed+ USB 3.1 port. The 4K Random read and write speeds aren’t that good at 10MB/s read and 0.02 MB/s write, so don’t be planning on booting or running an OS off this USB 3.0 drive. 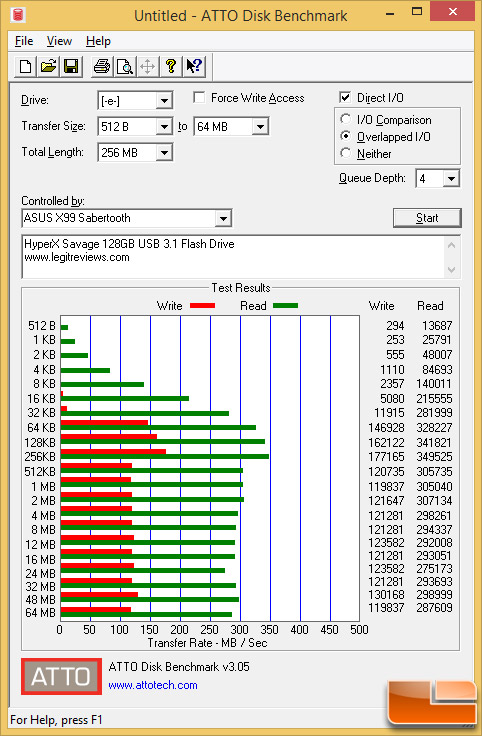 Benchmark Results: On ATTO we were able to get up to 350 MB/s read and 177MB/s write. Kingston advertises this drive as having 350 MB/s read speeds and 250MB/s for the write speeds, so we are spot on with the reads and a touch low on the write speeds. Note that the drive appears to have the best write performance with 64KB, 128KB and 256KB file sizes.

Anvil Storage Utilities is a very powerful tool that measures performance through a variety of tests which can be customized. Since some of the tests more or less duplicate what we get from other benchmarks we use already, we decided to use the IOPS (Input/Output Operations Per Second) testing on 4kb file sizes at a queue depth of 4, 16, and 32. IOPS performance is something SSD makers tout quite a bit but we generally dont do a lot of IOPS testing because frankly a lot of users cant relate to IOPS metrics as well and it tends to be more meaningful to the enterprise/server crowd. Still, it is another performance indicator with relevance and while some drives post good MB/s numbers, their IOPS scores arent always commensurate which this test will prove out. 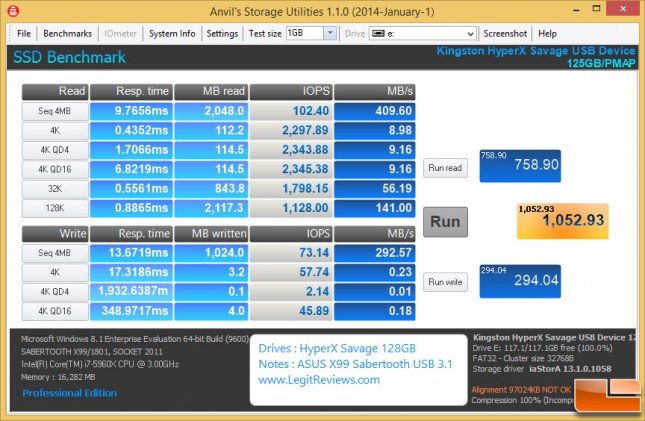 Iometer is an I/O subsystem measurement and characterization tool for single and clustered systems. It was originally developed by the Intel Corporation before being given to the Open Source Development Lab (OSDL) where it has remained since. 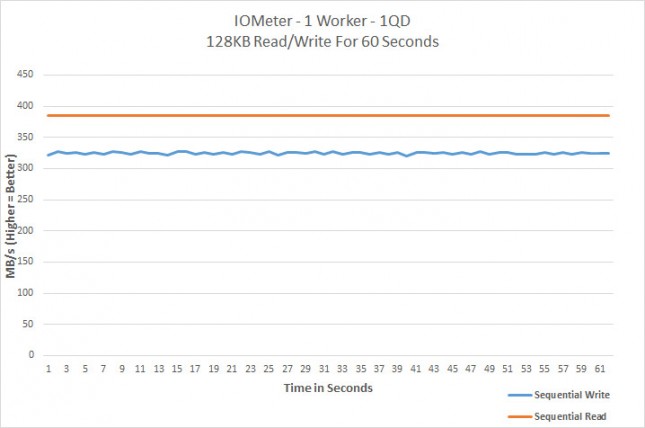 Benchmark Results: The last test we wanted to make sure that the HyperX Savage drive wasn’t using an SLC cache to have great burst speeds in quick benchmark tests and then slow down to much slower sustained speeds after the cache fills up when it’s used in the real world to transfer large data files. We moved around some file folders that had about 50GB of images and videos on them, but wanted to show it in a benchmark and picked IOMeter for the task. We ran IOMeter for 60 seconds on the HyperX Savage to ensure that no marketing tricks were being used and found that none were. We set the test up on one worker with a queue depth of one and found that the read test was right at 385 MB/s and the write test was bouncing around 319 to 327 MB/s. Not bad considering this drive has 350 MB/s read and 250 MB/s writes and we far exceeded that. This test wrote nearly 20GB of data to the drive and would have easily filed up a caching solution if one was being used.