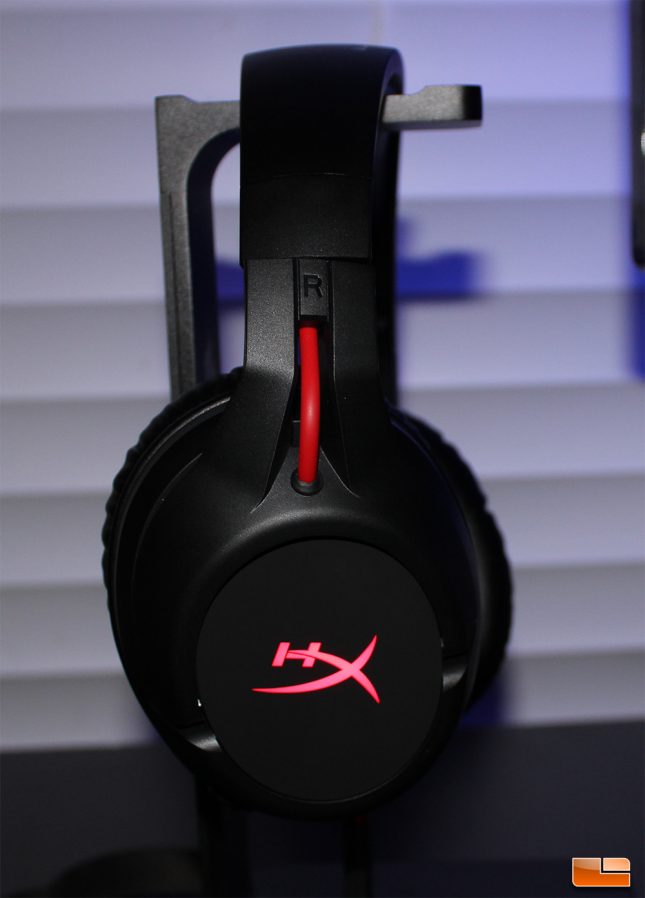 The HyperX Cloud Flight are lightweight and have a very stylish, streamlined black and red design that is similar to previously released HyperX headsets like the Cloud Stinger. Coming in at just 300 grams and featuring design elements geared towards comfort, the Cloud Flight are designed to be worn for hours on end. Each outer ear cup on the Cloud Flight is outfitted with an LED HyperX logo that can be toggled between solid, fade and off by quickly pressing the power button while the headset is powered on. There is a stiff red cable that comes out from the earcup, extending across the headband. The aluminum top band of the HyperX Cloud Flight is very sturdy and everything on the headset fits together well and feels high quality, though there is quite a bit of plastic being used. 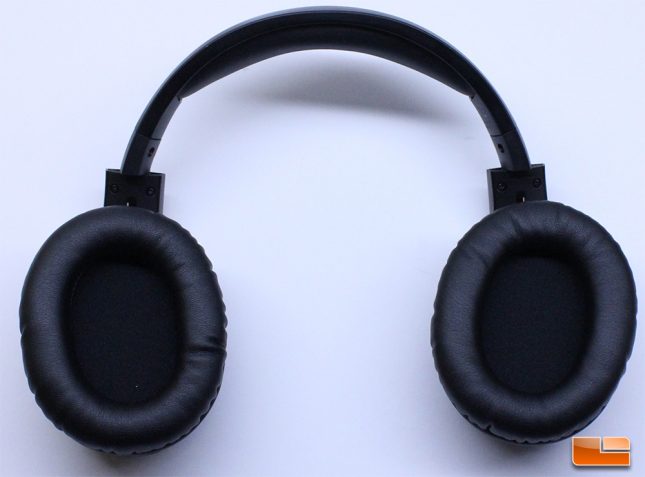 The HyperX Cloud Flight feature swivels on each ear cup and are capable of being turned 90 degrees so that the headset can be worn around the neck. This design is really clever and can also help save space when storing the Cloud Flight in a carrying bag. Both the upper headband and ear cups have ample material, though the head band could have just been slightly more padded. 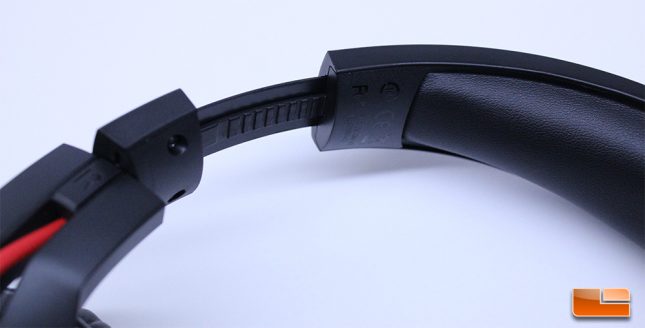 Height adjustment is done in tactile increments and the HyperX Cloud Flight are able to be adjusted quite a bit, to suit even the largest of heads. The plastic adjustment mechanism feels very smooth, while locking into each adjustment and staying there until you want to adjust the headphone. There was no swivel noise or other issues apparent from any of the joints on the HyperX Cloud Flight, but I would have liked to see more metal used here, especially at the adjustment mechanism area like HyperX did with the Cloud Alpha. 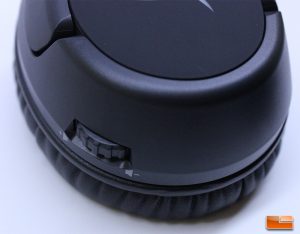 HyperX has outfitted the bottom of each ear cup on the Cloud Flight with ports, buttons and controls, with a mic mute button cleverly integrated into the left ear cup. The power button, 3.5 mm input jack, mic input and charging port are all on the bottom of the left side ear cup, while a volume rocker is on the right side. The power button turns on and off the Cloud Flight by being pressed in for three seconds and has a tactile feedback with no looseness or QC issues to note. The volume rocker is easy to find and offers a satisfying tactile response while remaining free of any looseness or other issues that could cause concerns over quality. 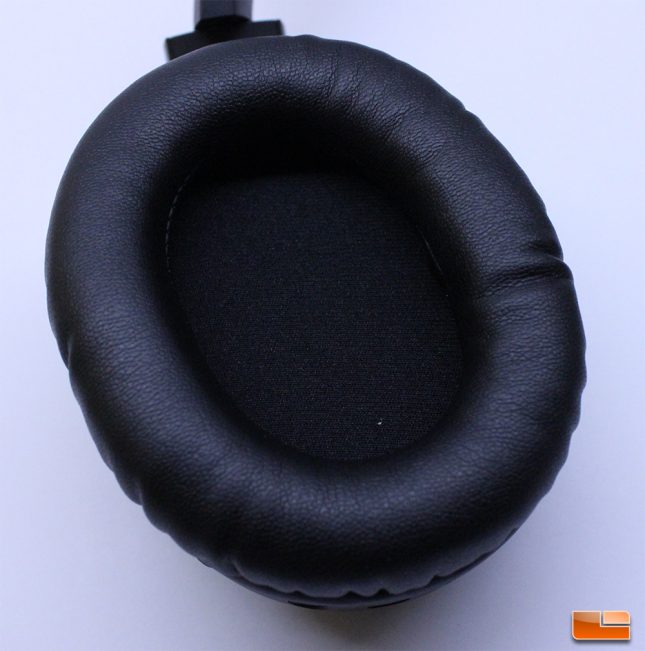 The ear cups on the HyperX Cloud Flight are covered with a leatherette material that is pretty comfortable and while the material breathes fairly well, the ear cups definitely can get a little warm over time. These are thoughtfully designed ear cups that fit perfectly around my ears and are on par with the ones that came with the HyperX Cloud Alpha in terms of comfort and fit. 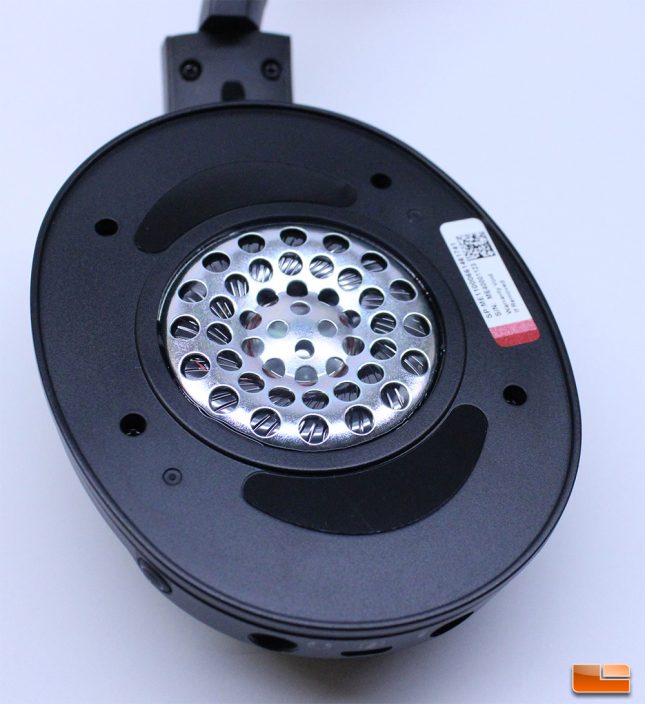 HyperX has outfitted the Cloud Flight with custom 50mm drivers, which look very capable at first glimpse. You can see the outer part of the driver by simply pulling back the ear pad. The driver isn’t covered with plastic and sits fairly close to the ear, which should lend to a more direct, less muddy sound. 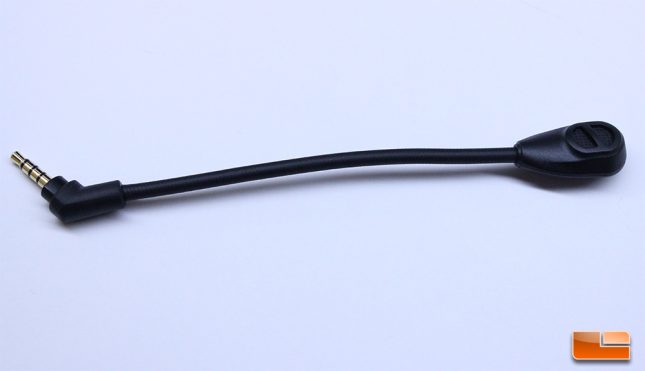 The removable microphone included with the HyperX Cloud Flight offers noise cancellation properties, while being very flexible to allow for perfect positioning for voice pick up. I do like to see flip-up microphones that are integrated into the gaming headset, but this solution is fine and lets the Cloud Flight easily turn into a regular pair of wired headphones.

While not quite possessing the audio separation and punchy bass that the HyperX Cloud Alpha are capable of, the HyperX Cloud Flight have a very nice, dynamic sound and the soundstage is excellent, especially given the closed back properties of the headset. When playing my current rotation of PC games like Escape From Tarkov, Overwatch and PUBG, the low latency wireless connection of the Cloud Flight sounded clear and had no perceivable delay in audio transfer. The lack of virtual surround sound wasn’t missed at all, since I have never found surround mode to be beneficial to my gaming. For movie watching and music listening, the HyperX Cloud Flight are top notch as they offer a very nice, balanced sound quality and their lightweight, wireless nature lets them be worn while barely noticing they are on. 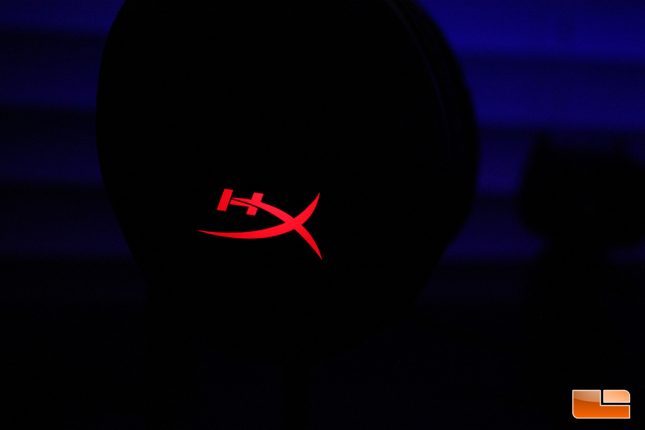 While the lack of surround sound and EQ mode weren’t something I missed on the Cloud Flight, I did miss the ability to monitor my battery life through software. The on-ear LED lighting isn’t necessary and you have no way of seeing if it is turned on or off unless you look to a mirror or take off the headset. With the LED lighting cutting battery life down to 13 hours, it makes little sense to run with the LED lighting on, unless you’re really trying to garner attention or are a true devotee to HyperX. I understand that gaming headset manufacturers are trying to give gamers all the features possible, but if given the choice, I’d take the Cloud Flight in a cheaper option minus the LED lighting and I am sure that a lot of HyperX customers would, as well.

None of the other wireless gaming headsets I’ve tested have the wireless range of the Cloud Flight, as I could literally walk through my apartment, even up stairs to the furthest room from my office, yet still never lose reception.

To get an idea of how the HyperX Cloud Flight compare with a quality wired gaming headset, here is a recording of the microphone on the HyperX Cloud Alpha over a Sound Blaster X Katana external DAC.

The HyperX Cloud Flight headset is incredibly comfortable and offers excellent sound quality paired with decent microphone quality. HyperX did a great job of covering the essentials with the Cloud Flight, but I can’t help but feel like the headset could have been rounded out just a bit more, as missing features like the ability to tell battery life, adjust sidetone and EQ were all things that I missed from my other gaming headsets. Thankfully, the sound quality and comfort of the Cloud Flight put them ahead of the pack, as HyperX can’t compete with Corsair and Logitech when it comes to software-controlled features, since there is no software available for the Cloud Flight.