Legit Reviews Editorial How Will Doom 3 Play On My Notebook?

How Will Doom 3 Play On My Notebook?

There was a 19 FPS performance decrease shown due to moving from 640×480 to 800×600. The ATI CATALYST 4.8 & 4.9 drivers still proved to be the dominate drivers and gameplay was pretty smooth at low detail settings.

When we kicked the eye candy on high we dropped back down below the magical number of 30 frames per second (although not by much). We saw more than a 10% performance increase by moving up to the ATI CATALYST 4.8 & 4.9 drivers and that’s what we wanted to know! It is clear by now that gamers looking for the most performance from discrete ATI graphics in their notebooks should be running modded CATALYST drivers.

Moving along to a resolution of 1024×768 we hit right at 30 frames per second in low detail. The performance differences are starting to become even since the CPU and GPU are becoming the bottleneck in performance.

With high detail enabled at 1024×768 the FPS dropped below 19 making the game stutter and not run smoothly. The game can be played at this resolution and settings, but you will not get the full DOOM 3 expierence at these settings. 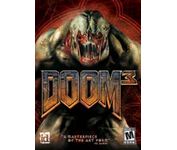 It is clear that DOOM 3 can be played at 640×480 with hardly any issues at all when set at low quality settings. Newer notebooks have entered the market since we picked up our ASUS M6N, but that only means your performance will be better than shown here! One thing we didn’t do for this review was overclocking on the video card. As always this can be done, but we wanted to focus more on the drivers than overclocking for this article.

Something else that wasn’t shown in the article was notebook memory. We benchmarked the entire review with 512mb of Kingston PC-2700 200-Pin SO-DIMM memory installed and the system worked fine. We added an additional 512mb of memory to the system to see if we could get any performance gains and did get a small gain — 0.1 FPS at 640×480. Not much, but every little bit helps, right?

We should also note that the optimal drivers for use on our particular notebook were the just released ATI CATALYST 4.8 drivers. They supported the correct screen resolutions for our wide screen 15.4″ notebook. The beta 4.9 (Doom 3) drivers didn’t allow us to go above 1024×768 on our notebook. The CATALYST 4.9 Beta drivers also yielded little, if any gain, over the Cat 4.8’s as seen in the testing.

If you are expecting to play at 1600×1200 on a notebook and get killer performance you are mistaken. On the other hand if you are a dedicated die hard gamer and are willing to play at lower screen resolutions (640×480 at low quality) then games like DOOM 3 can be played when using discrete graphics such as the ATI Mobility 9600 or an equivalent video solution from nVIDIA.

Who said DOOM 3 can’t be played on notebooks? If you are running discrete ATI graphics you have the ability to mod the latest CATALYST series drivers and boost your notebook performance levels for better game play.