How To Install Windows Vista Ultimate With RAID

Setting Up Vista Ultimate on a RAID Array

Recently, many of the users on the LR Forums want to install their first RAID array while others want to know more about Microsoft Windows Vista. I thought I could knock out two birds with one stone as I just happen to be upgrading my personal system with some new hard drives in RAID 0 and a fresh installation of Windows Vista Ultimate 32-bit. So, read on to see how to set up and install Windows Vista Ultimate on an Intel Core 2 Duo system using RAID 0. 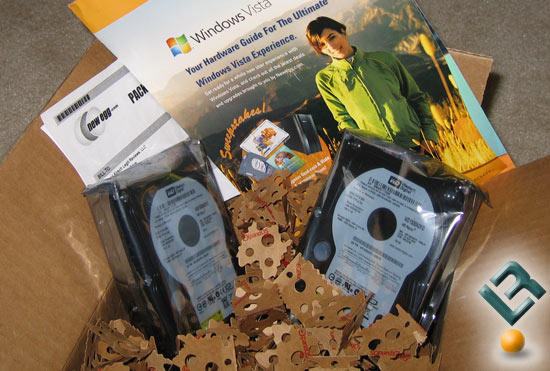 My personal system consisted of a pair of 250GB SATA Western Digital hard drives that have done me well over the past two years, but at just 7200 RPM’s they left more to be desired when it comes to speed. With the Western Digital Raptor WD1500ADFD drives coming down in price (below $200 after rebate) I ordered myself a pair as these faster 10,000RPM hard drives. Since I am installing Vista on these drives, I simply removed my old drives and installed these new drives in my system.

For those that have never made a RAID Array, the first thing you have to do is set up the motherboard BIOS for RAID. I have the Intel D975XBX ‘Bad Axe’ motherboard in my system so when I powered the system on, I hit ‘F2’ on the keyboard and entered the BIOS. I then navigated over to the System Setup menu and entered the ‘Advanced’ section. The third option down shows a setting that is called ‘Configure SATA as’ which needs to be set to RAID if you are setting up Vista on a RAID Array. If you aren’t, leave it alone as it should show ‘IDE’. Once the setting you need has been selected, be sure to save and exit the BIOS.