My Motherboard Is More Efficient Than Yours

It used to be that when you shopped for a motherboard you would find several of the same boards that would produce a wide variety of results.  Performance would vary greatly between motherboard brands using the same chipset.  You could wait for the reviews to come out and see that brand X was a 10% better performer than brand Z.   That performance gap has seemed to close over the last couple of years.  You still see some variance, but for the most part, boards are within what you could call a margin of error.  Technology has also advanced to the point that what we have is faster than what we need.  I mean, how fast does the average user need their computer to be?  Does it matter whether Word opens in one second or two seconds?  Me thinks not.  The average user never notices the difference in normal day to day use.

I say all of that to say this: if there is not a major difference in the performance of the boards, then something else has to set it apart.  These days users will look at price (probably most important for the average Joe), bundle (including games), overclocking (for the enthusiast) and now, power consumption.  A couple of years ago, power consumption was not a big deal.  Now, with real concern for our planet, and the fact that politics is involved, power consumption is a big deal, and I think rightfully so (although, maybe not to the extent that some take it). 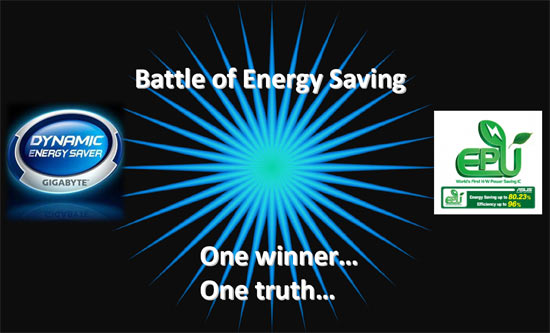 Enter ASUS and Gigabyte.  With the intensity and demeanor of a couple of two year olds, these two companies have recently taken their temper tantrums public over the way that power is handled on their boards. Gigabyte called out ASUS and said lied to consumers and claimed that their board was more energy efficient. 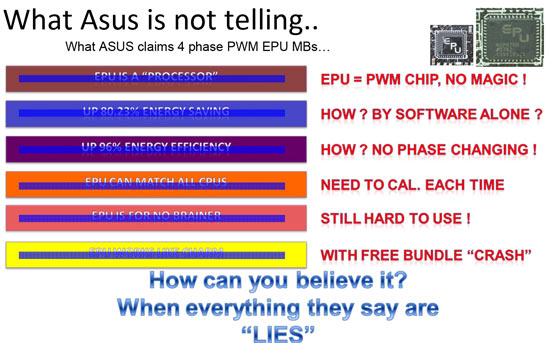 I will say from the get-go that I do not claim to understand all there is to know about how power consumption and power saving work, but I do know what my power meter reads as I put these boards to the test.  So, with all that said, we set out to take two boards through the ringer to see how their boards actually worked, and whose power handling worked the best. Unless you just want to look at the Gigabyte marketing slide showing that they win across the board in power consumption tests: 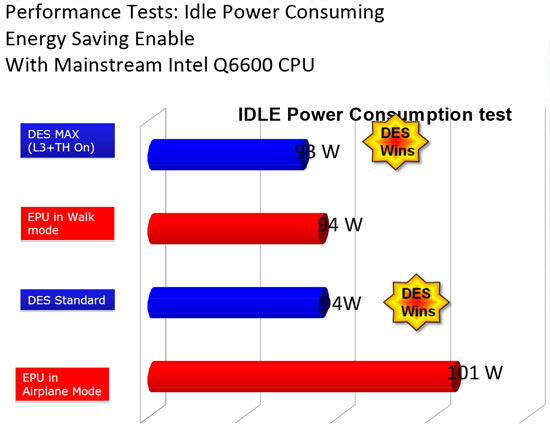 So, get a cup of Joe, sit back, and take the next few minutes to look over what we found.