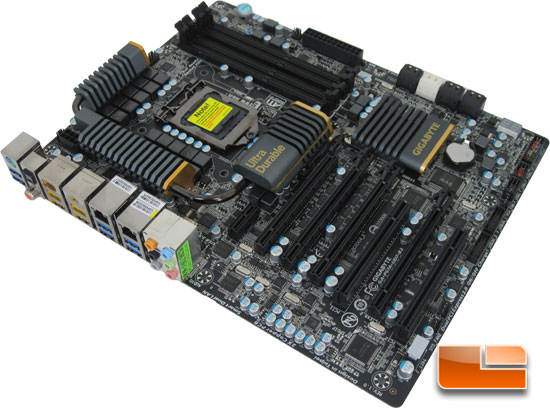 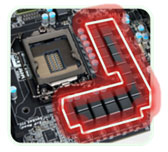 The 24 Phases of power being delivered to the CPU help to build a much more reliable power delivery system. The entire GIGABYTE 6 series of motherboards uses DUAL CPU Power Technology. This technology allows the CPU VRM power phases to split into a pair of power engines that work together. In the case of the P67A-UD7-B3 12 phases will be active while the other 12 are supplying power. 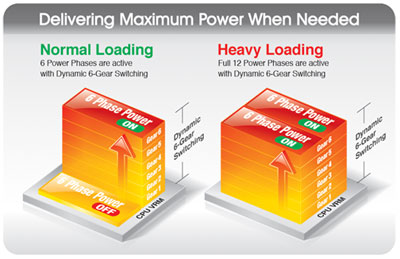 If you are using your shiny new GIGABYTE P67A-UD7-B3 for some light work like web browsing or any other task that isn’t very CPU intensive, the Dual CPU Power Technology will drop the number of phases that are active. Fire up an application like Folding at Home that will really use the CPU power that you have and the GIGABYTE P67A-UD7-B3 will increase the number of active phases up to the maximum 24 for the ultimate power delivery system.

Traditional power delivery consists of a pair pf discrete PowerMOS and a driver IC. GIGABYTE has incorporated these components into a single chip. Doing this gives us several advantages. One of these advantages is size. The area required to mount the Driver MOSFET’s is reduced by 50%. This will leave real estate available on the PCB for other integrated devices. Driver MOSFET’s can achieve increased efficiency and higher power transfer at higher switching frequencies. This will help satisfy the growing power needs of the current processors.

One aspect of the Intel P67 chipset that is an issue for some is the limited number of PCI express lanes. Being limited to a total of 16 lanes some companies have thrown in a third party chip to add some lanes. ASUS used the PLX PEX8608 chip to add a few extra lanes on the ASUS P8P67 Deluxe to bring the total number of PCIe lanes to 24. 20 of which are usable by the PCIe graphics. GIGABYTE went a different route, they added the NVIDIA NF200 chip to give a total of 32 PCIe lanes to the P67A-UD7-B3. This allows the P67A-UD7-B3 to operate a pair of cards at x16 each or four cards at x8 each.