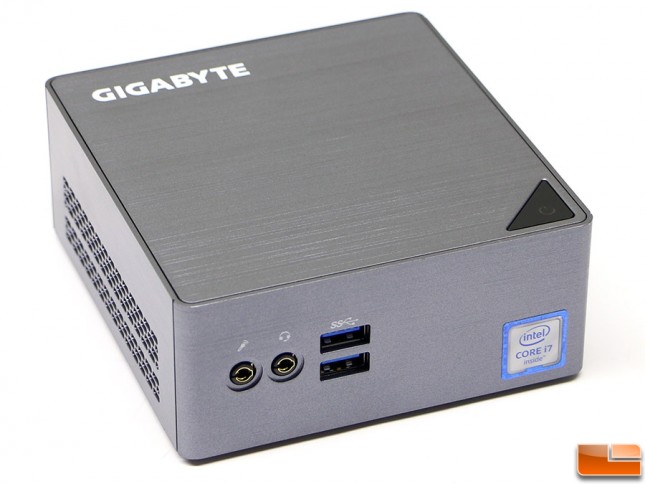 We did run into some BIOS issues though that soured the mood a bit. Our G.SKILL Ripjaws 8GB (2x4GB) 1866MHz DDR3L memory kit wasn’t properly detected on this system and would only run at 1600MHz. Gigabyte advertises the GB-BSi7H-6500 supporting DDR3L memory kits at 1600/1866/2133 MHz at capacities up to 16GB (2x8GB). A larger issue was one with the wireless card where it would sometimes be there when the system was turned on and then other times it wasn’t there. The only ‘fix’ we could find was to reboot the system until the wireless card was detected and able to work. Sometimes it would take just one reboot and other times it would take multiple reboots.

A Couple Reboots Later & The Wireless Connection is Back!

The last and likely most critical issue that we ran into was a sleep mode problem where the GB-BSi7H-6500 wouldn’t successfully come out of sleep on our Windows 10 Pro installation with all the latest updates. This means you have to hold the power button down to get the system to turn off and possibly lose some data or corrupt something on the storage drive. To be fair Gigabyte has a list of supported M.2 PCIe SSDs and the Samsung SSD 950 Pro isn’t listed. The older Samsung SSD SM951 OEM drive is listed as being supported though. Gigabyte hasn’t updated the list of supported drives since October 2015, so it’s roughly 6 months old. In fact, the entire Windows 10 driver support page for the GB-BSi7-6500 hasn’t been updated in nearly 6 months and many of the drivers listed are out dated.

At the end of the day the GB-BSi7H-6500 is nice, but we ran into a few quirks that hurt the user experience of the system. If you spent $990 and got the same exact setup that we have we think you’ll be frustrated with the issues we encountered. The supported drive list also hasn’t been updated in six months, so how do you know what drives really work and which ones do not? The Samsung SSD 950 Pro came out the day after the Gigabyte M.2 support list was last updated. It would be nice to see the drives that have issues listed as well.

Hopefully this article will get Gigabyte to update the support lists, driver page and maybe even get the BIOS team to go back and look into some enhancements! If Gigabyte can nail down the issues we encountered we’d easily give this system the thumbs up as the performance and platform were great when it worked properly!

After spending a couple days and nearly 20 e-mails with Gigabyte, we came to the conclusion that the wirless connectivity issues and the inability to come out of sleep mode was due to how we flashed the UEFI. We used the AFUDOS utility that was included in the UEFI file directory on Gigabyte’s site, but found that utility doesn’t work. You must use the Intel Flash Programming Tool (FPT) to update this series of Skylake powered BRIX models. One we simply updated the UEFI with the right utility the Windows sleep mode issue was resolved as was the wireless connectivity being missing on some system boots. The only issue that remained was the G.Skill G.Skill Ripjaws 8GB (2x4GB) 1866MHz DDR3L SO-DIMM kit (part number F3-1866C11D-8GRSL) was limited to 1600MHz with CL10 timings. That kit of memory is a couple years old though, so there is likely an SPD incompatibility issue. Our performance numbers remained the same before and after the UEFI update, so it appears using the wrong flash update tool just harmed system stability.

Update 7/3/2016: It appears that Gigabyte still has not updated their website or provided the proper Intel Flash Programming Tool to their customers. We have reached out to them again begging them to update their files!

Legit Bottom Line: The Gigabyte GB-BSi7H-6500 has solid performance numbers, but we ran into some issues that hurt the overall user experience.