For the testing methodology, both the Aorus Waterforce X 240 and X 360 were mounted on the AMD Ryzen 9 3900X with an all core overclock of 4.2GHz. Voltage setting was set to 1.35v with the radiator mounted at the front of the case. The case of choice was the Corsair iCUE 4000X RGB with the side and front panels closed off. There were three Corsair SP RGB ELITE 120mm fans for exhaust: one in the rear, and two at the top. This was to simulate a real-world scenario on how the cooler will perform in a typical gaming setup. Results may vary depending on the computer case and fan configurations. 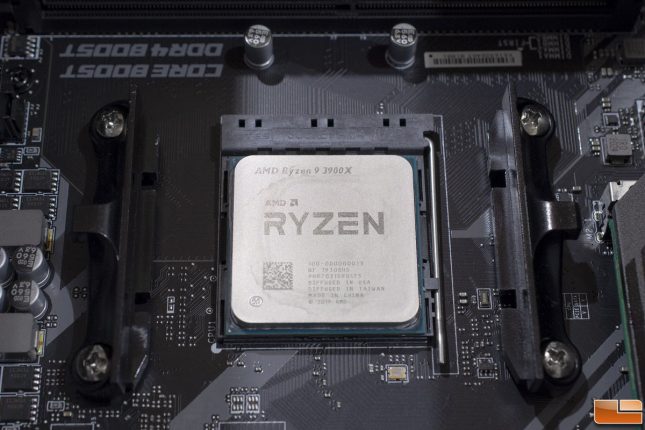 To keep the test results consistent between all coolers, I went with a tube of Noctua NT-H1 thermal paste instead of the provided thermal paste from the box. 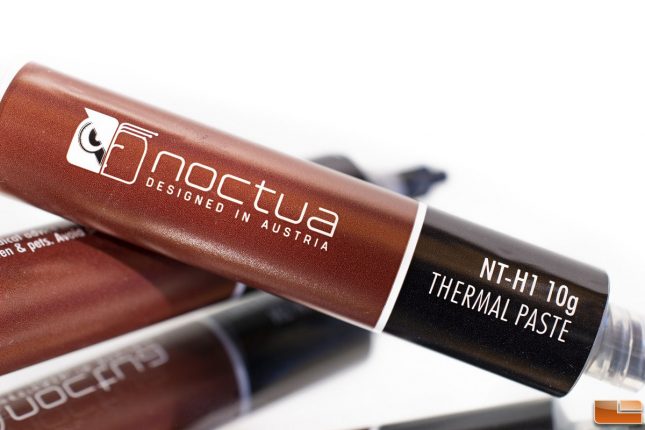 I also tested the CPU temperature on the different modes offered in the Aorus Engine software. But to test the coolers neck to neck, I ran a scenario with the fans attached directly to the MSI Bazooka B550M motherboard. The fan settings on the motherboard were set to run all fans in the case at 100% when the CPU temperature reaches 60C, but lowers fan RPM to 25% during idle. Ambient room temperature was 20C with AIDA64 running a 20-minute stress test on the CPU, FPU, and cache for maximum heat. Idle tests will also be a 20-minute run period sitting on the desktop. I also threw in the Corsair H150i RGB PRO XT for something to compare against. Lets take a look at the benchmark results below. 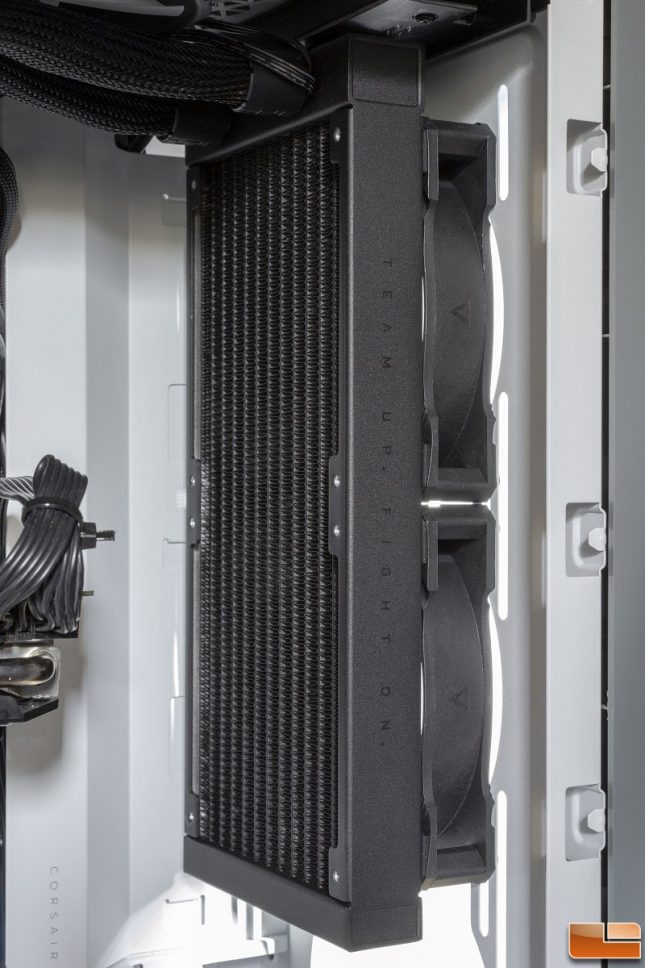 Below are the results with the motherboard in control of the fans. We can see the Corsair H150i RGB PRO XT topped out at exactly 77C averaged during our 20 minute stress test. It was cooler than the 78.9C from the Aorus Waterforce X 360. This was most likely due to the fact the fans on the H150i RGB PRO XT had a higher airflow of 75 CFM in oppose to 60.07 CFM on the X 240 and X 360 at around 2400 RPM. In terms of idle temperatures, both the H150i RGB PRO XT and Aorus Waterforce X 360 were within margin of error. The X 240, however, also had no trouble cooling this 3900X even though it achieved higher temperatures. 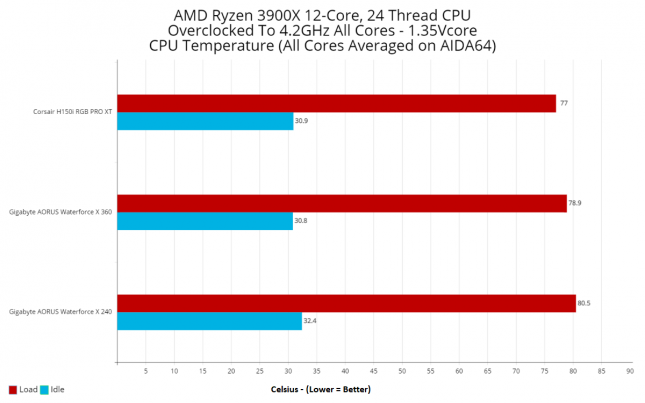 Out of the box, the Aorus Engine software defaults the X 240 and X 360 to Default fans and Quiet pump. For the X 240, it achieved an average temperature of 87.9C with this setting during load. This was because the fans were locked at 1200 RPM no matter what the temperature was on the CPU. However, this did allow for a cool idle temperature of 29.9C averaged.

Once I switched away from Default mode on the fans and set the pump to Balanced, the fans were allowed to reach its max RPM speeds. This obviously gave us the same load results for Quiet, Balanced, Performance, and Max fans. The only difference were the idle speeds, which was dependent on the selected mode. When the fans and the pump were set to Max, this allowed us to achieve the coolest averaged temperatures at 80.1C load and 28.7C idle. Even at idle, the pump was mostly quiet at Max mode and was barely noticeable most of the time. 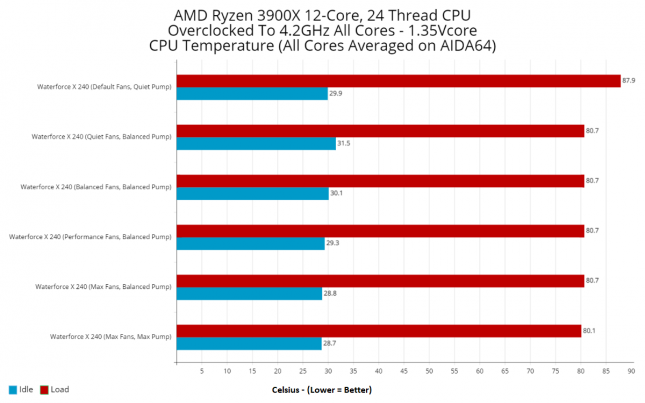 With the Aorus Waterforce X 360, I saw similar behavior as seen in the previous test results. The default settings achieved the warmest temperatures at an average of 84C at load and 29.4C at idle. Switching to the other modes, it achieved an average of 78.4C at load. The idle temperatures, just like the X 240, behaved similarly depending on the selected mode. Setting both the fans and the pump to Max allowed the CPU to run at an average temperature of 78.2C and an idle temperature of 28.3C. Not much of a difference compared to running the fans at Max and the pump at Performance mode as we saw with the X 240. The law of diminishing returns was starting to creep up here. 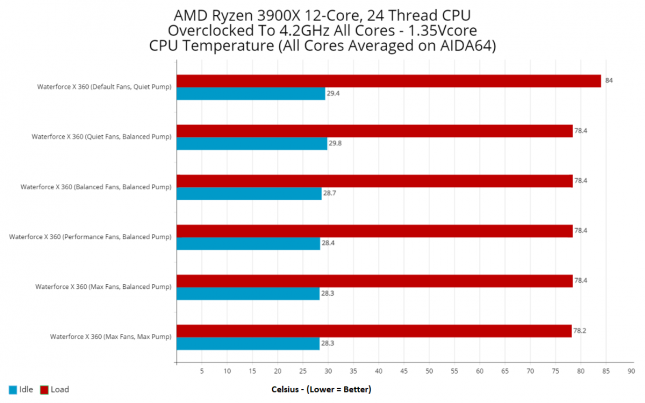 When it comes to aesthetics, the Aorus Waterforce X 240 and X 360 looked great with its Nylon sleeved water tubes and RGB fans. The RGB color reproduction was very accurate, and the eight RGB LEDs in each of the fans allowed for smooth color transitions. 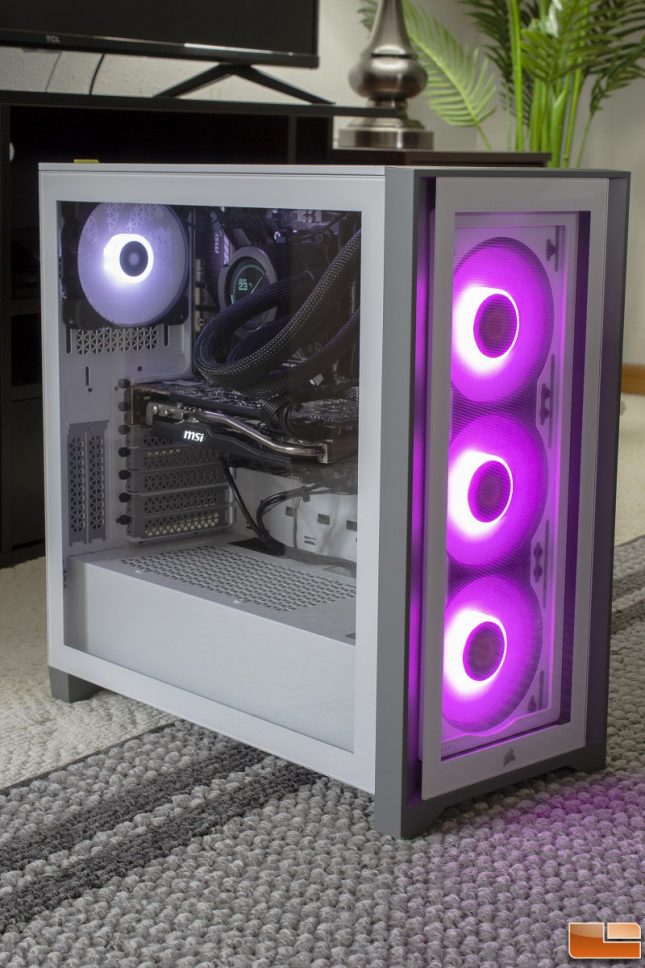 The lighting customization and effects were not the most flexible since the fans daisy chained off of each other. This meant the fans were in sync, so there was not a way to have a lighting effect where light gets passed back and forth from one fan to another. This will require each fan to plug into their own ARGB fan headers to allow for more customizable and complex lighting effects. The design of the Aorus Waterforce X series currently does not allow for this as there is only one ARGB fan cable off the pump. 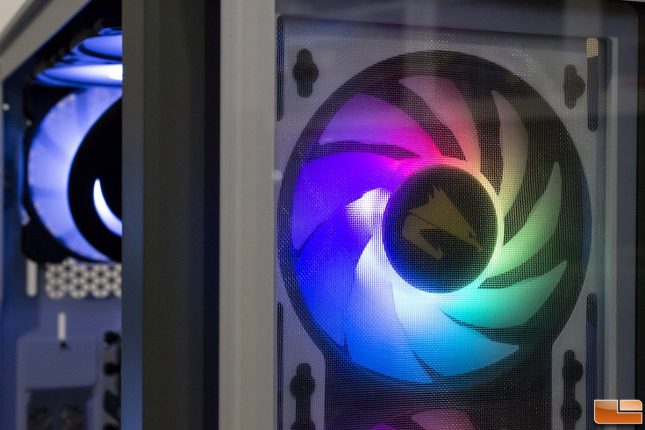 I do like the fact the micro-USB cable for the pump is a right-angle connector. Although this can also be said about Corsair water cooling units, this is something I love to see especially for the sake of cable management. I mounted the pump in the orientation where the micro-USB port faces upwards to reduce the amount of cabling from the micro-USB cable. 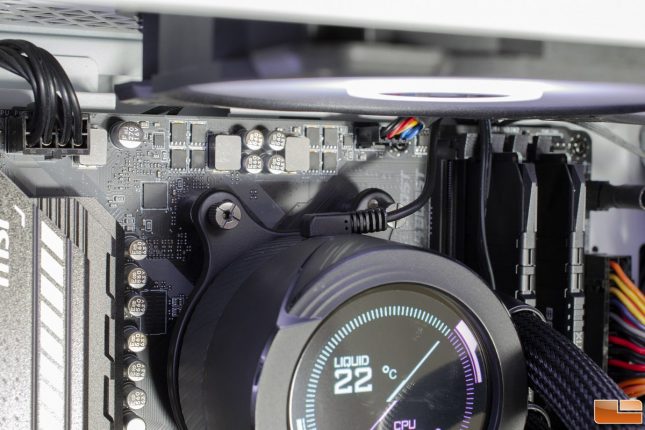 Of course, you could also mount the pump in this orientation where the micro-USB cable is at the bottom. However, I found this to be somewhat troublesome in a smaller case with fans at the top. 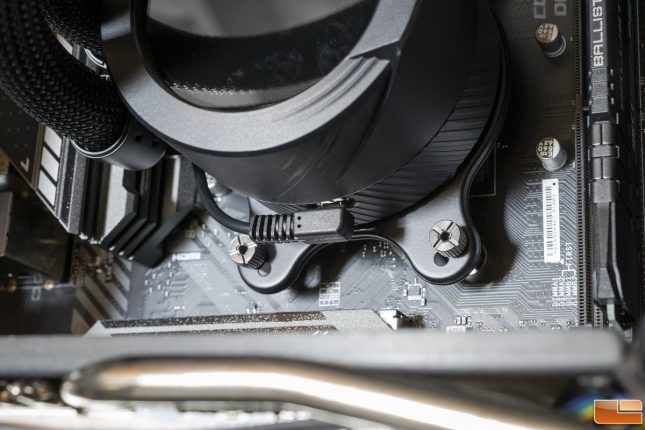 This was because the water tubes came very close into contacting one of the top fans. This had the potential to cause a leak if not addressed properly. 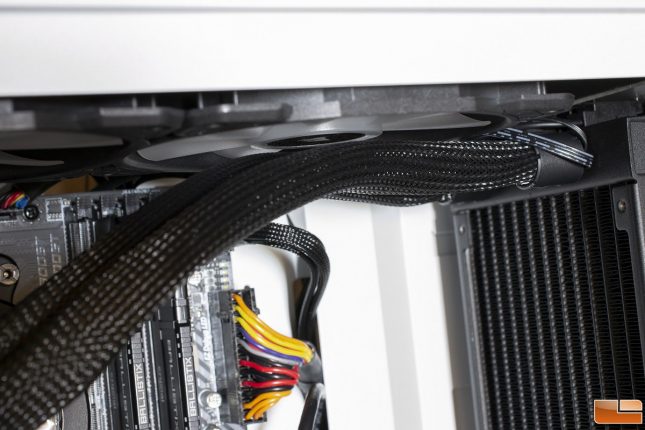 Because of the enlarged 7.8mm water tubes, this made it challenging to install the water-cooling unit into the case. The tubes felt really stiff, but luckily, they did not kink while installing. I did apply quite a bit of pressure when mounting the pump and radiator because of the stiffer tubing. This was especially difficult when deciding which orientation to mount the pump. If you plan to mount the radiator at the front of a smaller case, this may actually be more difficult. Of course, if you do not have top fans, you can mount the pump with the tubes coming from the left side. Doing so will cause the tubes to overlap the LCD screen, so just something to think about. 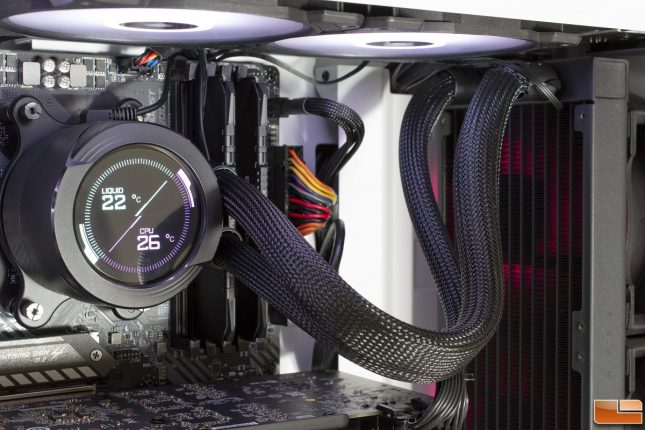 Having the ability to view system stats, custom texts, gifs, images, and video through the LCD of the Aorus Waterforce X 240 and X 360 is a neat feature. We have seen this implementation with the previous Aorus Liquid Coolers and on the NZXT Z series liquid coolers. Unlike the NZXT Cam software where it allows for software rotation, the Aorus Waterforce X series allow for hardware rotation of the LCD screen. The screen is also very bright and color reproduction is not too bad either. 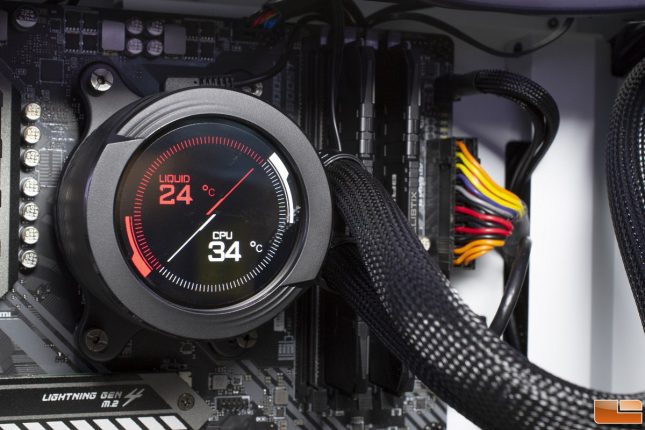 Overall, both the Aorus Waterforce X 240 and X 360 perform well and provide many options in terms of customization. It includes mounting hardware for various Intel and AMD sockets, including Intel’s upcoming Alder Lake CPUs for LGA 1700. Installation was straight forward after fiddling around with the stiff water tubes, and the performance is good with the ability to customize fan and pump settings in the Aorus Engine software. RGB Fusion was easy to use for customizing RGB lighting effects, but I would have liked to see just one software to control both performance and aesthetic settings. 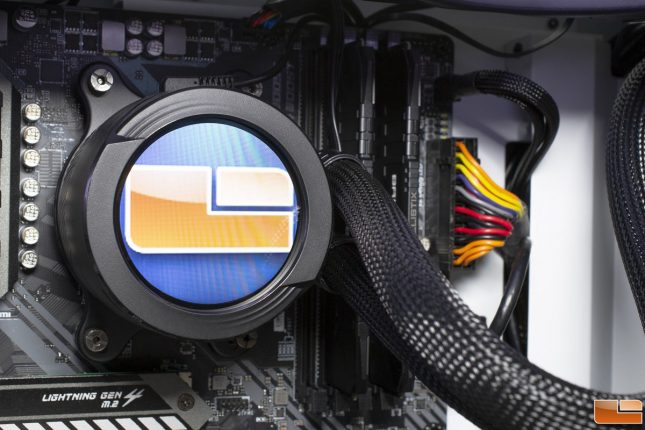 The Aorus Waterforce X series come with a three-year warranty, which is shorter than Corsair’s five-year and NZXT’s six-year warranties. The fans are rated at 73,500 hours with its Graphene Nano Lubricant bearing, and the pump is rated at 376,715 hours with its ceramic axis. This improves durability and has anti-corrosion properties. Of course, only time can tell just how long something can last. Gigabyte has not released the pricing to these coolers at the time of this review, but they should be available soon. At the end of the day, most gamers will be more than happy with the performance and features these water-cooling units deliver.