The NVIDIA GeForce GTX 980 Ti video card is said to be ready for Microsoft Windows 10 when the OS is released on July 29th as the hardware and software is ready to take advantage of the DirectX 12 API. Legit Reviews was able to sit down with NVIDIA’s Tom Peterson and discuss what exactly this meant in the days ahead of the GeForce GTX 980 Ti video card launch. He let us know that all NVIDIA GeForce video cards dating all the way back to the Fermi-based GeForce GTX 400 series will support the D3D 12 API. This means that millions of video cards will be able to support the CPU overhead reducing features, asynchronous compute, and closer-to-the-metal control options that we’ve been hearing about for many months.

NVIDIA let us know that beyond the basic DirectX 12 features that the DX12 API also includes support for new graphics rendering features that will allow developers to create game titles with richer graphics effects. How important these features are is debatable as game developers usually take a long time to implement advanced DX12 features into popular game titles.

From what we have been told DX12 Feature Level 12.0 supports tiled resources, bindless textures, and typed UAV access.

DX12 Feature Level 12.1 is the next step up and features more advanced features like a conservative raster and raster ordered views.

From what we gather with DirectX 12 is that you have have tiled resources support in DX12 Feature Level 12.1, but then have different Tiered Levels within that Feature Set. Confused yet? Microsoft and NVIDIA aren’t talking about the Tier Levels that are within the Feature Levels just yet, but a quick glance at the DirectX Caps Viewer in the public builds of Windows 10 will show mention of tier levels.

NVIDIA has already released the first GeForce Windows 10 WHQL video card driver, which is a great sign seeing how the final build was over two months away at that time. We took the latest GeForce driver for Windows 10 that we could get our hands on and used the latest DirectX Caps Viewer for Windows 10 to see the DirectX features levels in Windows 10 Insider Preview (Build 10074) 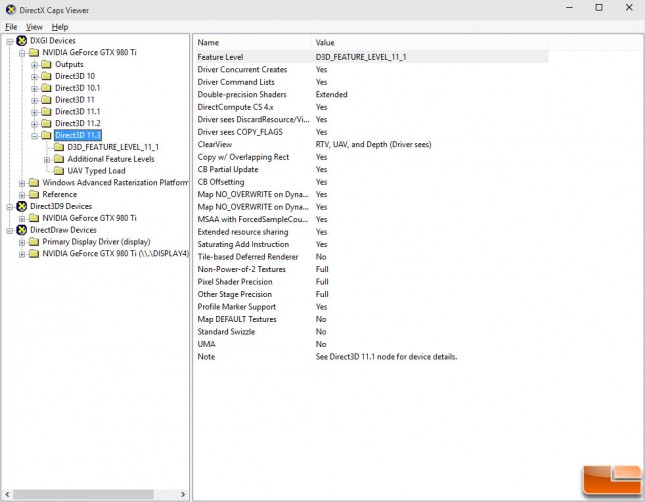 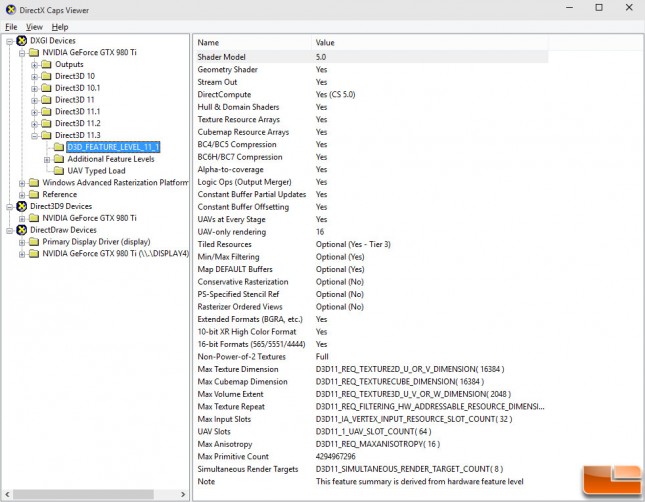 Everything looks as expected, but we noticed that the Tiled Resources are shown as tier 3. This appears to confirm that Feature Level 12.0 has at least three tiers of options within the feature set. The whole point of having features and tiers is so the software guys know how to code things and it looks like that just got tougher from what we can tell. 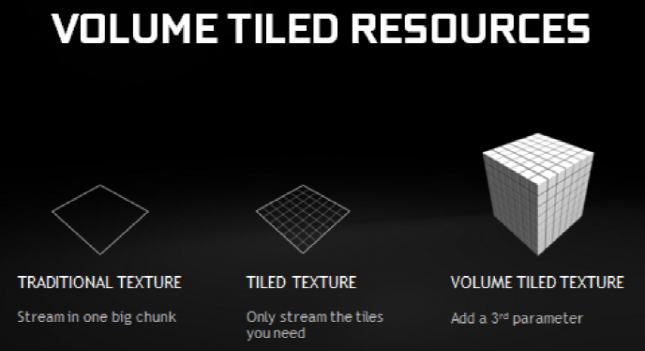 The NVIDIA GeForce GTX 980 Ti supports volume tiled resources, which is why it shows up correctly as having optional support for Tiled Resources (Tier 3) in the DirectX Caps Viewer. Previously, tiled resources were limited to 2D objects only. With volume tiled resources, this capability is extended to volume (3D) textures also. This means that anything volumetric in nature (fluids, smoke, clouds, fire and fog would benefit from this feature. 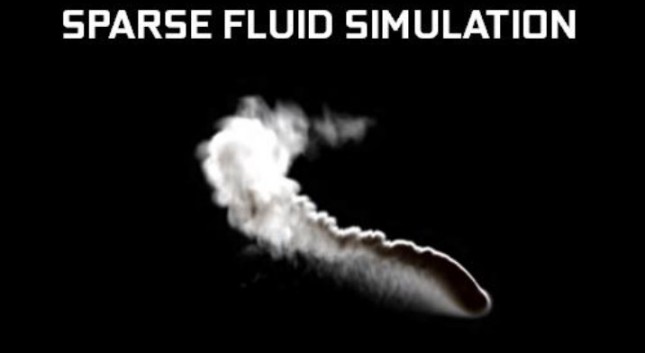 NVIDIA is showing off how they are able to do volume tiled resources in a demo called Sparse Fluid Simulation that they are showing off today at Computex 2015. This is the first time the demo has been shown to anyone, so we’ll be sure to bring you the video of this DX12 feature running when on GeForce GTX 900 series cards when we get it. 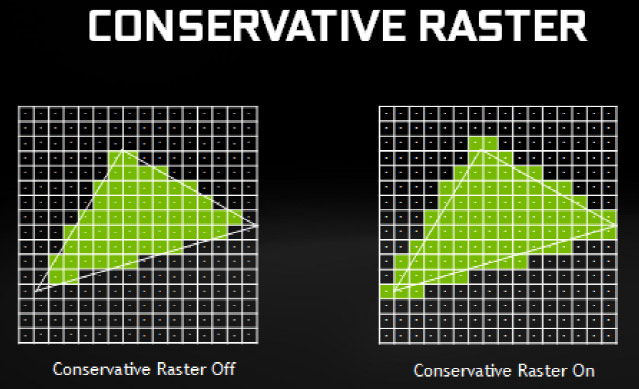 Conservative Rasterization shows up as an optional feature in the DirectX Caps Viewer, but NVIDIA says that it is one of key requirements needed for DirectX 12 Feature Level 12.1. Conservative Raster provides a more accurate method for determining whether or not a pixel is covered, at the cost of being more expensive in terms of performance. Basically, it more accurately determines if a polygon covers part of a pixel. In traditional rasterization, a triangle is considered covered if a pixel covers a specific sample point within that pixel, for example, the center of the pixel in the example above. With conservative rasterization rules on the other hand, a pixel is considered covered if any part of the pixel is covered by any part of the triangle. By providing hardware acceleration for conservative raster, the GPU can perform these calculations more efficiently. This in turn enables game developers to employ novel new approaches to enhance image quality.

An example of using the DirectX 12 Feature Level 12.1 conservative raster would be producing good looking ray-traced shadows. In the example above, the ray-traced shadows are free of the aliasing found in the other examples with the feature disabled. Without a doubt you can see much cleaner lines.

Last week a computer animation festival trailer came out for SIGGRAPH 2015 that shows a sneak peak of some of the work that is being done by industry leaders right now. It wouldn’t be a big surprise to learn that many parts of the trailer were done in DX12 using some of the DX12 features we talked about today.

to summarize, the NVIDIA GeForce GTX 900 series cards with the GM2xx GPU will all support DirectX 12 Feature Level 12.1 from what we have been told. We are unsure what AMD will be supporting on the AMD Radeon Fury and they declined to comment about DX12 support when we asked them today since they will not discuss unannounced products. We know many gamers want to know more about DX12 support as it will make a difference as to what card they are interested in purchasing. We’ll all have to wait to see what AMD officially states.

Here is what the DirectX Caps Viewer looks like on the NVIDIA GeForce GTX 980 reference card on the same system with the same drivers for those that are curious about that card. 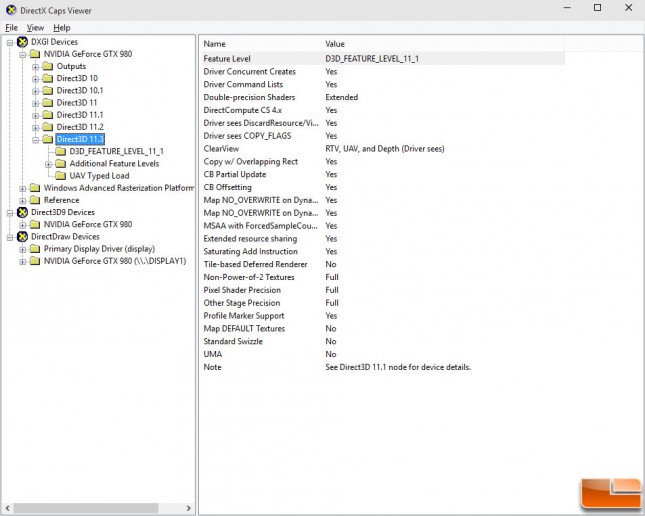 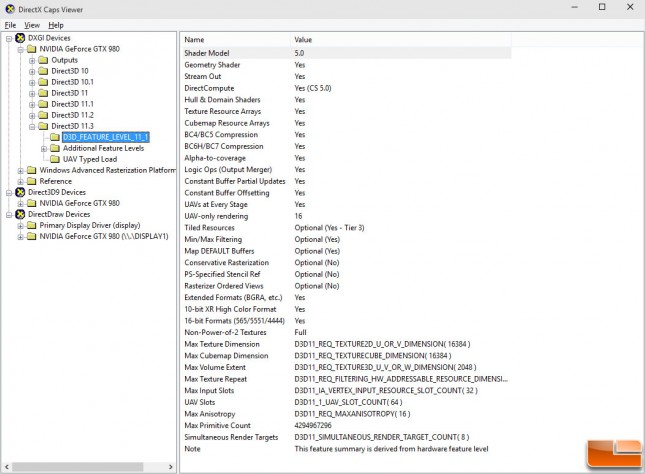 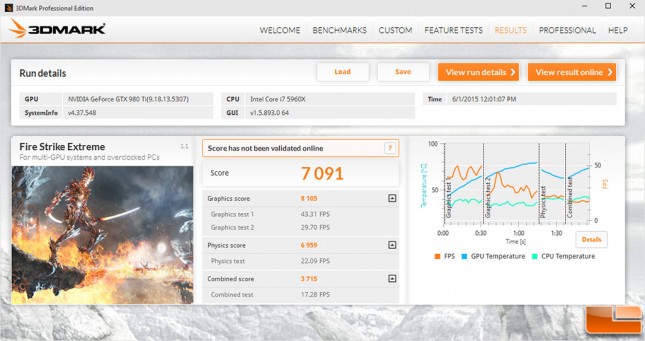