We were invited by nVidia to attend the official press conference for the release of the NVIDIA® GeForce™ FX Go5700 mobile GPU. The Go5700 consumes less power than the Go5600 and also comes with PowerMizer 4.0 featuring NVIDIA SmartDimmer which is an intelligent power management method for extending battery life. On top of all this there is a significant performance jump from the Go5600! Less power consumption and increased performance is a very good thing. 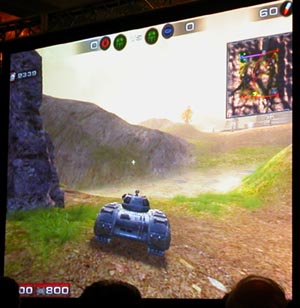 nVidia nVidia invited representatives from both EPIC and Electronic Arts, who were on hand to endorse the new graphics solution. The above image shows live game play footage from Unreal Tournament 2004, but we also got the chance to see Medal of Honor: Pacific Assault. We later had the chance to play UT2004 on an Alienware laptop featuring the GeForce FX Go 5700 and the game play was excellent. We were told by nVidia that laptops featuring the Go 5700 should arrive on store shelves in early Janurary 2004. 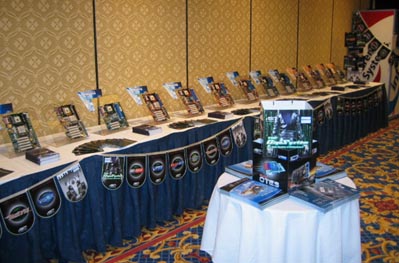 ABIT was on hand showing off their motherboards and video cards. On display was also some systems running off their Guru overclocking technology along with their new server lines that have come out recently. 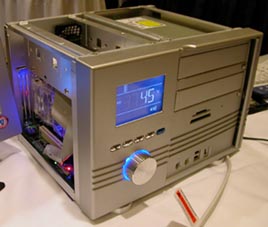 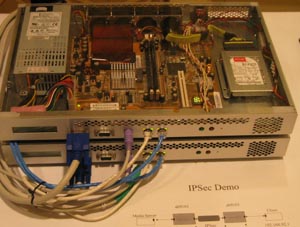 They had their SFF “Digidice” up and running and it looks a bit different from when we last saw it at QuakeCon 2003. They also claimed to have the “world’s fastest computer” running on an Abit IC7-G with an Intel P4 EE 3.2 GHz processor, but we heard this claim from a few companies while at Comdex 2003. 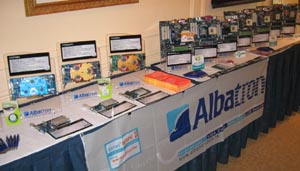 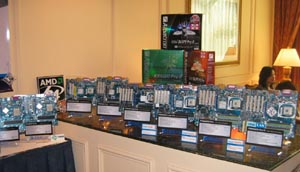 Albatron was on hand showing off their newest nVidia FX video cards along with their full motherboard line for both AMD and Intel processors.