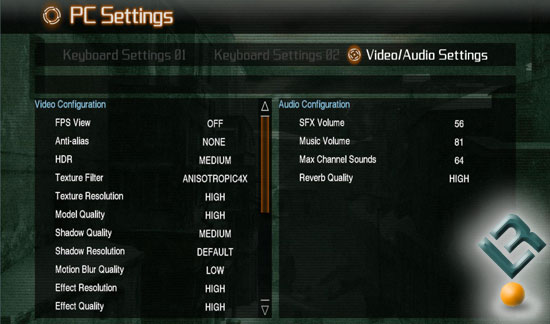 Lost Planet is an epic gaming masterpiece combining a gripping single player campaign and intense multiplayer modes. Lost Planet contains sophisticated visuals, with an unmatched level of detail as advanced light sourcing is used to ensure a realistic presentation that enhances every explosion, smoke and particle effect. Enormous world maps unfold as players battle hostile creatures in blistering weather conditions across vast snowfields and blazing volcanic areas either on foot or in armed, robotic Vital Suits. The DirectX 10 Demo Version was used to benchmark both the ATI Radeon HD 2900 XT and the NVIDIA GeForce 8800 GTX video cards with the two most recent drivers for each card. Some of the settings for the benchmarking can be seen above. Everything was left to default and only the resolution was increased for the 1600×1200 benchmarks.

5-16-2007 Update: I now have a BFG Technologies GeForce 8800 GTS OC 640MB video card to use, so I have updated the performance charts to include these numbers! Enjoy! 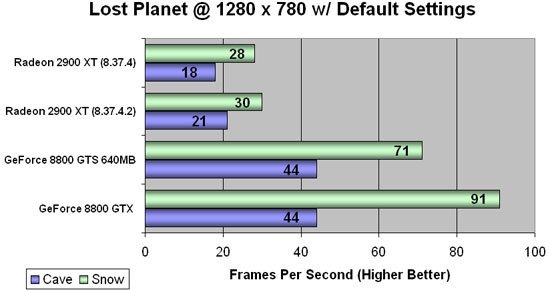 The default resolution for Lost Planet was 1280×720 which played great on NVIDIA cards, but had some serious driver issues on the ATI cards. Motion Blur on the ATI HD 2900 XT was not working correctly and many objects in the scenes we not even rendered. The NVIDIA GeForce 8800 GTX with the just released Vista 158.42 drivers was able to render everything correctly and with great frame rates. Not only did the NVIDIA GeForce 8800 GTX take the performance lead it clearly had better image quality than the ATI HD 2900 XT with both available drivers. 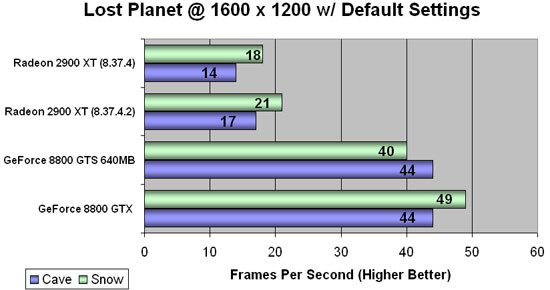 With the resolution cranked up to 1600 x 1200 we found that the NVIDIA GeForce 8800 GTX was able to stay above 40 FPS on both the Cave and Snow benchmark levels that are in the Lost Planet PC demo. The ATI cards still were of course to render everything correctly at these resolutions and didn’t do well at all. The only positive thing to mention on the ATI Radeon HD 2900 XT is that the latest pre-alpha driver (8.37.4.2) did show performance improvements over the release driver (8.37.4).

Yesterday we showed that ATI Radeon HD 2900 XT video card had image quality issues on Call of Juarez and today we find out that ATI has many driver issues on Lost Planet.  Both of these PC game titles are DirectX 10, which is what people have been waiting many months to come out.  Now the benchmarks and demos are finally available it’s obvious that ATI still has a way to go on their drivers.  I’ll cut them some slack though as their video card has only been out for a day, but don’t forget the ATI HD 2900 XT was supposed to be out last year and it was delayed over six months.  With the long delay and rumors that the HD 2000 Series would destroy all on DX10 applications. The past 24 hours have been an eye opener for all those in PC industry as that has not been the case at all. The ball is in AMD’s court and for their sake I hope they can get their drivers working right for DirectX 10 applications as right now the game demos from Techland/Ubisoft and Capcom don’t look too hot on AMD/ATI cards. I guess the PR folks over at ATI and AMD are saying DAAMIT right about now… whoops… 😉