Armed with NVIDIA Windows Vista driver 158.42 that was officially released yesterday and armed with a special ATI driver that is known as the “feature preview” driver, I was able to compare image quality. The ATI pre-alpha driver (8.37.4.2) includes improvements to Adaptive AA, HDR, and has new features such as 12xAA and 24xAA. After installing Lost Planet with the latest DirectX 10 drivers from Microsoft we ran the game at the default resolution and settings.  We first ran the game on the ATI Radeon HD 2900 XT and saw this… 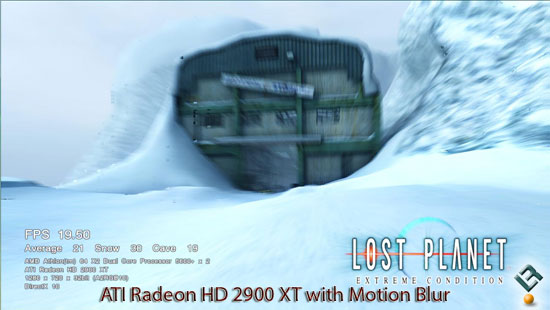 The scene was rendered with artifacts and the motion blur that was set to low by default looked to be way too much.  The frame rate for the map ‘snow’ averaged out to be around 30FPS on the Radeon HD 2900 XT.  On to the NVIDIA card! 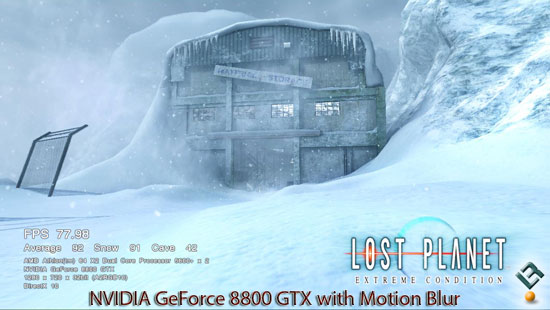 Right off the bat we noticed that the map Snow actually had falling snow now.  It seems that all the artifacts that was observed on the ATI card was likely to be snow that wasn’t able to be rendered. Objects like fences and alien creatures were observed with the NVIDIA card that were not present when we used the ATI video card. With motion blur enabled by default the scene still managed to be crisp to the point that it might not even be working correctly as the scene was so clear. Just to make sure that the NVIDIA card and drivers were doing motion blur correctly we tested the GeForce 8800 GTX on HIGH Motion Blur and No Motion Blur and did notice a difference in both the frame rate and the blur on the objects in the distance.  If you can’t notice the difference above click the above images to check it out for yourself.

It seemed that ATI was having issues with the motion blur, so it was disabled in the game settings to see if it would improve the frame rate and image quality. 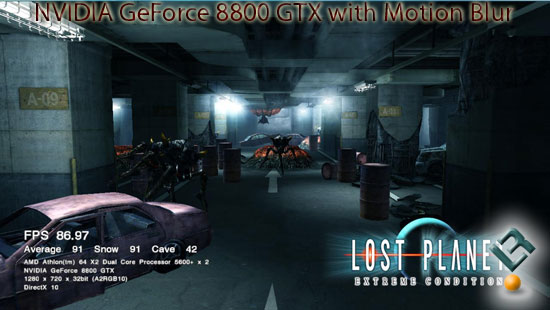 In this underground parking lot scene on the NVIDIA GeForce 8800 GTX video card take note that there is some smoke/fog on the ceiling, the HDR from the lights and a ‘hive’ opening that the alien creatures come out of in the middle of the scene on both the ground and ceiling. This frame was captured at nearly 87FPS. 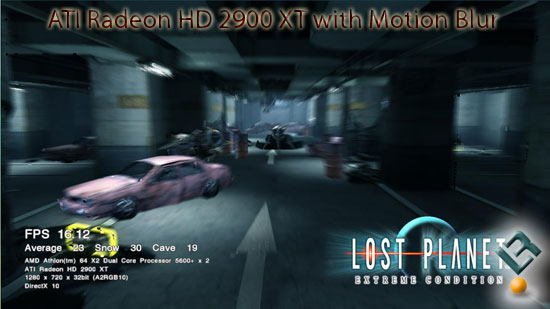 The same scene on the ATI Radeon HD 2900 XT video card is very different.  Of course it’s not the exact same frame, but it’s close enough.  There is no fog, the lighting is very different, and the holes for the creatures aren’t really rendered. With motion blur enabled this scene was captured at 16 frames per second. 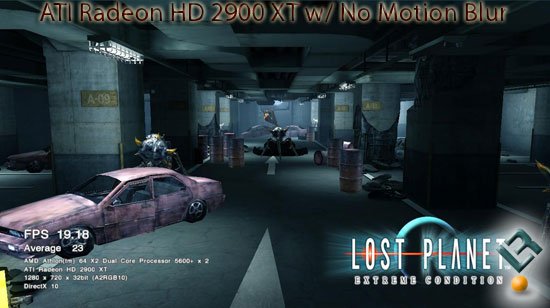 With motion blur disabled on the ATI graphics card the scene looked better, but objects were missing and the lighting/fog was still not looking like what we saw on the NVIDIA card. The frame rate did improve by about 10% with motion blur disabled.  It’s obvious that ATI has some serious driver issues on this early demo for Lost Planet. Let’s move along and take a look at the performance numbers just for fun. 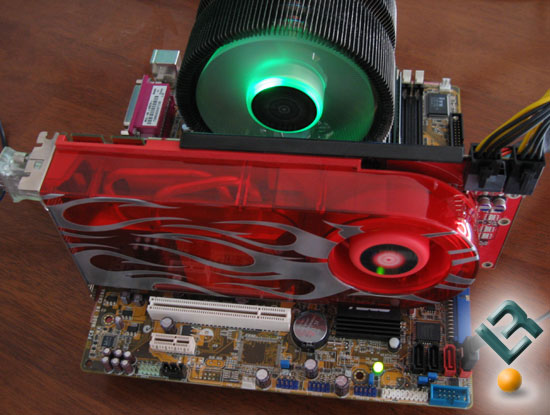