Yesterday, I took a look the DirectX 10 Benchmark based off the game Call of Juarez. After analysis of the benchmark utility it was found that the image quality was better on the NVIDIA GeForce 8800 Series and the demo was actually playable above 30 frames per second on the NVIDIA card at a low resolution of 1024×768 with no AA enabled. This was a shocking outcome as the game developer told Legit Reviews that the CoJ Benchmark was done with exclusive cooperation with AMD and they were the ones that did most of the testing and made the call when the benchmark was ready to be sent out. Yesterday Legit Reviews was able to get in touch with Capcom and was able to download copies of their DirectX 10 demo and benchmark utility for the upcoming game title Lost Planet: Extreme Condition.

According to Capcom Lost Planet contains sophisticated visuals, with an unmatched level of detail as advanced light sourcing is used to ensure a realistic presentation that enhances every explosion, smoke and particle effect. Enormous world maps are used as players battle hostile creatures in blistering weather conditions across vast snowfields and blazing volcanic areas either on foot or in armed, robotic Vital Suits. The benchmark will be released later today (5-15-2007) at 6PM PST and will be available in DirectX 9 and DirectX 10 varieties. 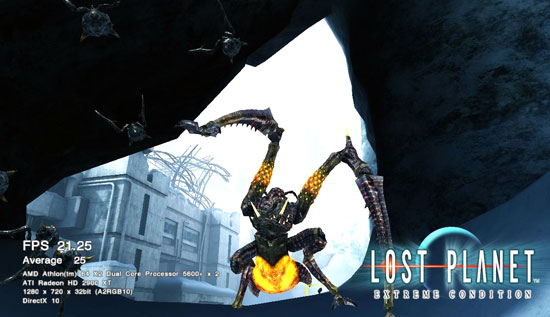 Over the past 24 hours both AMD/ATI and NVIDIA have issued statements on the demo and to be fair to all these comments will be passed along to our readers.

Before you begin testing, there are a few points I want to convey about “Lost Planet”. “Lost Planet” is an Nvidia-sponsored title, and one that Nvidia has had a chance to look at and optimize their drivers for. The developer has not made us aware of this new benchmark, and as such the ATI Radeon driver team has not had the opportunity explore how the benchmark uses our hardware and optimize in a similar fashion. Over the next little while AMD will be looking at this, but in the meantime, please note that whatever performance you see will not be reflective of what gamers will experience in the final build of the game.

This week, Capcom will be releasing two versions of its Lost Planet: Extreme Condition demo for the PC. Both versions will contain the same content (i.e., no differences in game play), but one version will be DirectX 9 and the other DX 10. The latter version will be the world’s first downloadable DX 10 game demo. The demo also contains a system performance test. The test is an in-engine run-through of two levels of the game, complete with enemies, explosions and 3D meshes. The performance test shows your current FPS, average FPS, relevant system info (CPU and speed, graphics card, resolution and DX version) and, after a complete pass through of both levels, an average FPS for both the “Snow” and “Cave” sections. We think that this tester will be a useful tool for your testing purposes, as well as for your community.

Let’s take a look at the image quality and see how ATI and NVIDIA does on this new DirectX 10 game demo.