The Crucial P1 1TB NVMe SSD was the number one selling drive during Amazon’s Prime Day sale this year as you could pick up the 1TB model for $79.99 shipped. The drive is now back up to $95.99 shipped, but we have a feeling that you’ll be able to find this drive at lower prices for Black Friday 2019. That is the time of year that gamers and enthusiasts usually look for rock bottom pricing to snag a good deal on an SSD. Black Friday has historically been a good time to lock in big savings and we think gamers are going to be looking for more storage space that will enable them to hold hot new game titles like Call of Duty: Modern Warfare and Red Dead Redemption 2. 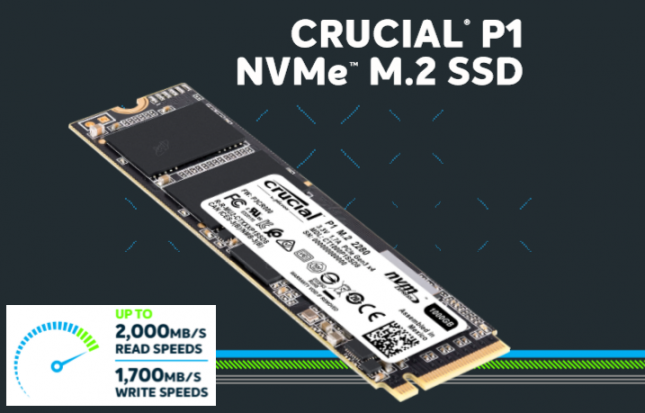 Crucial backs the P1 series with a solid 5-year warranty and an endurance rating of 100 Total Bytes Written (TBW) on the 500GB model and 200 TBW on the 1TB model. Over a course of five years that means you can be able to write about 54GB of data per day to the 500 GB drive and 109GB of data per day to the 1TB drive and still be covered under warranty. The life expectancy (MTTF) is set at 1.5 million hours. The Crucial P1 series does use Quad-Level Cell (QLC) NAND Flash memory, which was first introduced in 2018 with the promise of driving down SSD prices. Seeing how we are seeing 1TB drives available for under $80 shipped to your door here in 2019 it seems like QLC NAND Flash has fulfilled this promise. Sure, the write performance is lower than many TLC NAND Flash based products, but it seems to be good enough. Gamers usually store games for months or years, so the slower write speeds shouldn’t be bothersome. Besides most gamers in America have a 200 Mbps or 400 Mbps broadband internet connection, so they are only able to download games at these speeds. That converts over to about 25-50 MB/s write speeds to the SSD, a speed the Crucial P1’s dynamic write acceleration (SLC cache) can easily handle. The dynamic cache solution on the P1 series means an empty drive could be using over 100GB of SLC cache, but as the drive fills up with data the amount of SLC cache decreases. Once the cache if filled up by a long sustained write operation you’ll notice slower performance than the drives specifications as this model is speed rated with available SLC cache. 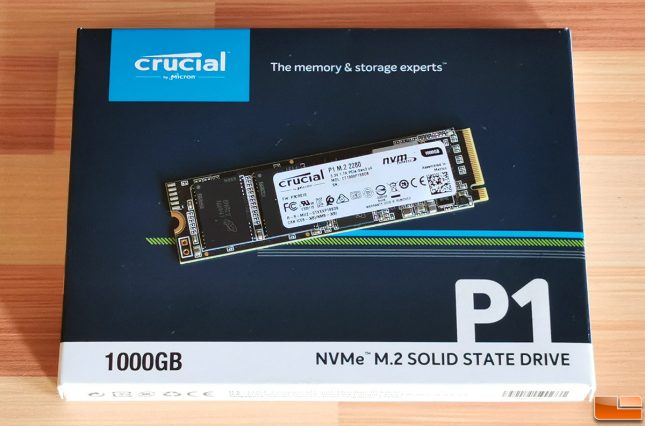 The drive that we are reviewing today is the Crucial P1 1TB model that is sold under part number CT1000P1SSD8. The Crucial P1 NVMe SSD uses the standard 2280 (80mm) ‘gum stick’ form factor with a single-sided design on both the 500GB and 1TB models. Crucial went with a black PCB for their entry-level drive, so it looks similar to all the other M.2 NVMe SSDs on the market today. Inside the box you’ll find the drive, but it is also worth highlighting the fact that with this drive you can download free Acronis True Image software from Crucial website which helps you to clone the data.

When it comes to the components used on the Crucial P1, Micron went with the Silicon Motion (SMI) SM2263ENG 4-channel NVMe controller, Micron 64-layer QLC NAND Flash chips, and Micron DDR3 DRAM for cache. All of the components are on the top of the SSD with no components residing on the back. It should also be noted that the Crucial P1 series has similar power loss functionality compared to the Crucial MX series of drives.

You also can download Crucials Storage Executive utility for free well from companys site. Storage Executive provides easy access to system information, drive health data, firmware updates and other drive maintenance options. When we installed and used Storage Executive on the Crucial P1 1TB review sample it alerted us to the fact that there was a new firmware revision available, so we updated our drive from firmware P3CR010 to P3CR013 before benchmarking the drive. The firmware update process was done on the drive on the Windows 10 desktop without issue and did not destroy any data on the P1. 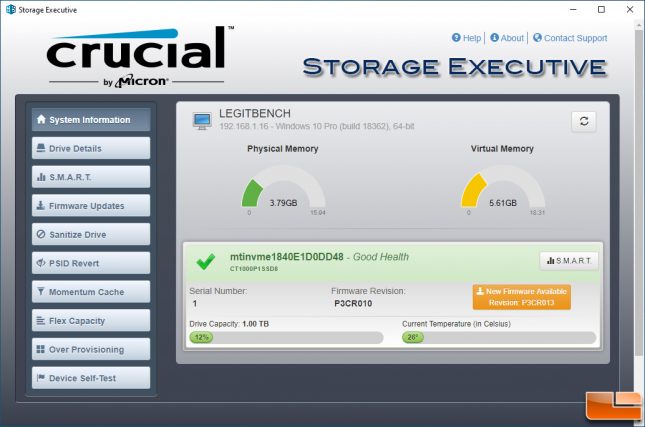 Let’s take a quick look at the SSD test system and then move along and see how this 1TB drive performs against 10 other SSDs that are all 1TB or greater in capacity.