Cougar ships the Puri TKL in a black box with orange accents. The Cherry logo is opposite the Cougar logo on the header of the box, so it’s obvious that the Cherry MX switches are a prominent marketing point for Cougar with this product, as they should be.

Rather than make several different boxes, Cougar puts check boxes above graphics of specific switches on the Puri TKL box to designate which switch is being used. As you can see, our sample came with the very popular Cherry MX Blue, a tactile, clicky switch that many typists prefer, but may not the best for gaming when compared to switches like Logitech Romer-G and Cherry MX Reds. The model number for the Puri TKL with Cherry MX Blue Switches is PURI TKL3, while the model number for the Cherry MX Red version is PURI TKL1.

Cougar shows that the linear MX Silver, which is also known as the MX Speed because of it’s 1.2mm actuation distance, is available on the Puri TKL. If the Puri TKL is available at the same $69.99 MSRP with these particular switches, I can see it being very popular with FPS gamers. 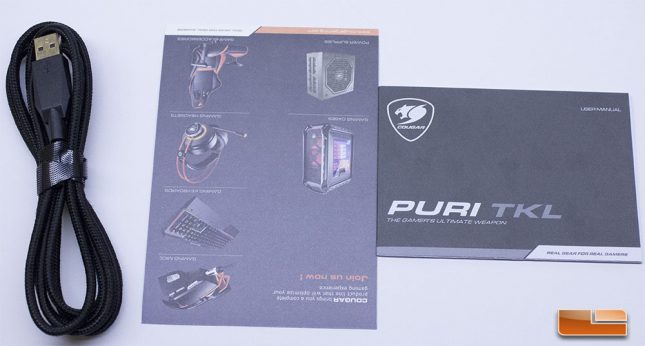 Cougar ships the Puri TKL with a braided USB cable that has gold plated ends, along with a product brochure and manual. The manual explains how to set different lighting modes on the keyboard and is informative, but I figure most users will toss it aside. 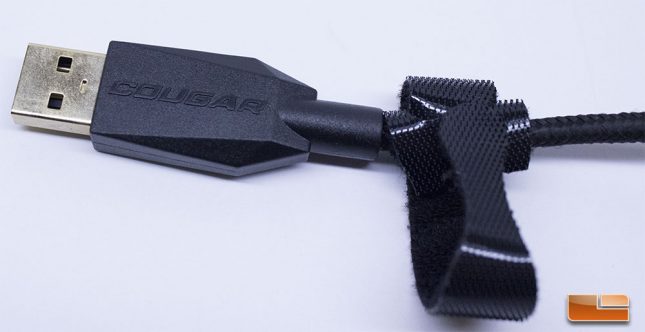 The braided USB cable included with the Puri TKL is very well made, with high quality connectors on each, along with a tie strap included to assist with cable management. I’ve seen much worse cables included with keyboards that cost twice as much as the Puri TKL, so kudos to Cougar for covering their bases and going with a quality cable that has their logo on it.

The Puri TKL ships with this plastic cover that is magnetized on a few areas that hold the cover to the screws on the front of the keyboard. This cover is secured very well and stayed on even when I turned the Puri TKL towards the ground and shook it.

The plastic cover included with the Puri TKL has a very clever design and looks great, with a darkened finish and smoked Cougar logo that allows characters from the keyboard to shine through. This cover will protect the keyboard during transportation and when it isn’t being used at a LAN party.

The Puri TKL has a very solid, well-built black frame and I could not get it to flex in the least. The bezels aren’t too thick, though the Puri TKL can’t match the slim footprint of the Ducky One TKL. For a $69.99 keyboard, I can’t help but be impressed by the build quality, here. The key caps have a pronounced, yet clean font on them that definitely belong at home on a gaming keyboard. Cougar went with high quality ABS keycaps that have a smooth finish that feels good to type on and they aren’t going to wear anytime soon. The screws that line the front bezel of the Puri TKL give it a unique look, while also providing magnetized points for the plastic cover to hold. The keys are set over a black backplate, which is fine given the white LED backlighting.

There is a small bit of brushed aluminum Cougar branding between the arrow and function keys, but it looks good and matches the unit well. You can see the lighting adjustment on the arrow keys, with the up arrow making the lighting brighter and the down arrow setting the brightness down, or turning the LED effects of altogether. 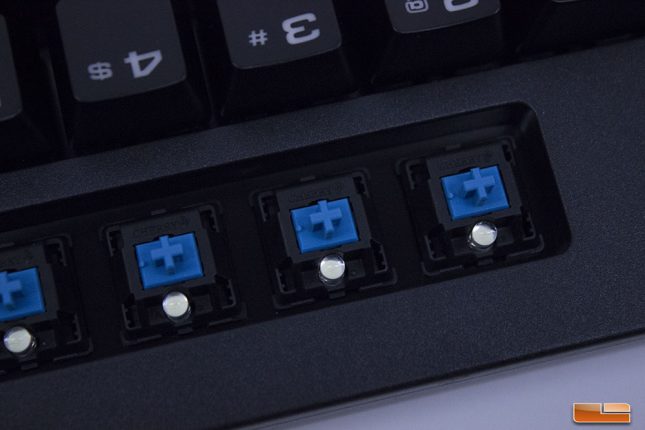 Here we see the Cherry MX Blue switches on the Cougar Puri TKL that I was sent for review. Cougar has other switches available on the Puri TKL, as I mentioned, but the MX Blue are very popular. I prefer MX Browns, as Blues are just too loud when they have been fully actuated and make the “click” sound that so many love. The Cherry MX Blues on the Puri TKL were implemented well, with proper spacing and solid installation onto their backplate, with no wobble or other build issues noticeable. The keys that require stabilizers are using Cherry versions rather than Costar, in case you have a preference in that department. You can see that each switch is outfitted with a white LED, which sits in an area that Cherry provisions into the plastic.

The bottom of the Puri TKL has a stamped Cougar logo, which was probably not needed given the branding on front of the keyboard and cover. There are four rubber isolation feet on the bottom of the Puri TKL that help keep the keyboard secure to whatever surface it is on. I found these feet to work well on my MDF table. There are two levels of height adjustment on the Puri TKL, but I found the default height to be perfect and rarely find the need to use height adjustment on keyboards. 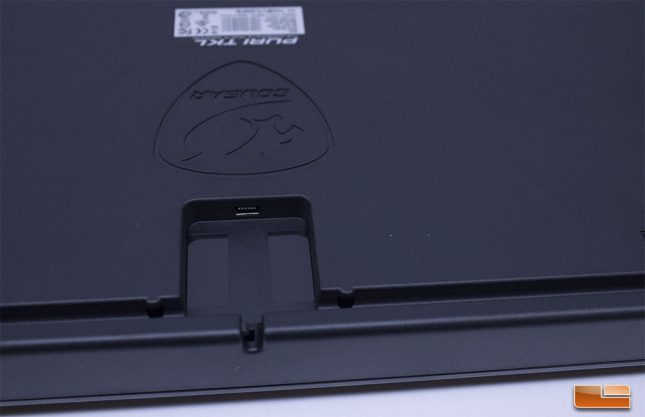 The Puri TKL features a Mini USB connector input, along with two channels to route your cable. The cable routes well in these channels and there are plastic clips to keep it secure. The Mini USB connector felt solid and didn’t have any play or wiggle. The USB connection is deep enough into the keyboard that there is room for the cable to bend without putting too much strain on the end of the cable or connector.

Once we get the Puri TKL hooked up, we see the default LED mode. While the camera will pick up the blue in the LED’s, the Cougar Puri TKL has a very white, uniform LED brightness that looks great through the bold characters of the keyboard. The different modes are set by pressing the FN key and the lighting keys above the arrows.

The Cougar logo looks good and can be toggled to blink or turn off by pressing FN+L. I am not a fan of forced branding on my peripherals and Cougar has been guilty of this in a major way with some of their other products, but the Puri TKL lets you tone down the branding a bit by allowing the lighting to be toggled.

Now that I’ve gone over the external features and build quality of the Puri TKL, let’s wrap this review up with my overall thoughts.