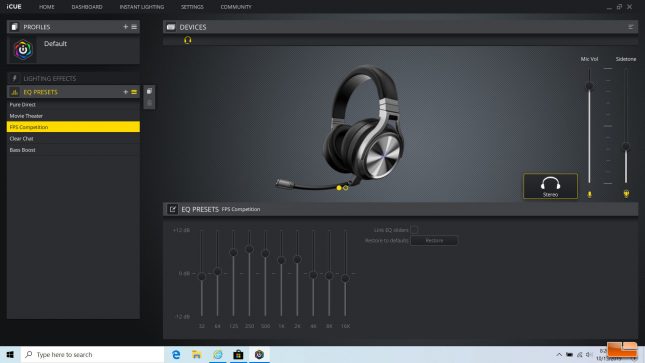 The Corsair Virtuoso needs Corsair iCUE to control various settings, though it will work fine without iCUE in stereo mode. I already had the latest version of iCUE installed since I use the Corsair IronClaw RGB Wireless mouse with my system. I would say the settings in iCUE for the Virtuoso are pretty basic for such an expensive headset, but that also makes things pretty straightforward. There are no adjustments for echo or noise cancellation on the mic, though side tone adjustment is available so that you can monitor your voice during game play. You can toggle between the stereo and 7.1 modes from the main section, in addition to adjusting the EQ, something the Virtuoso takes very well to. 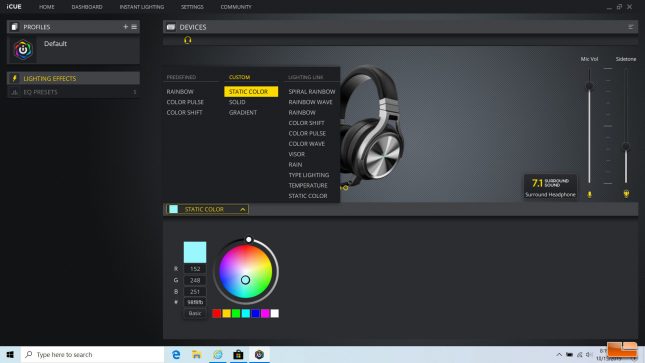 The lighting effects on the Virtuoso can be controlled through iCUE and the available effects are pretty extensive. Since the Virtuoso only have simple logo-lighting, many of the effects simply don’t translate well. I found the color shift mode allowed for a nice, smooth animation between colors without being too flashy. 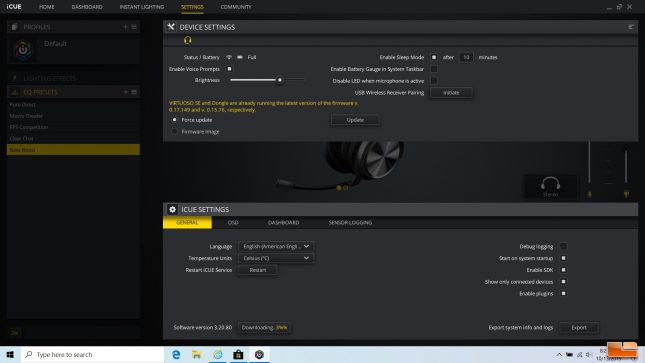 In the setting section for the Virtuoso you can toggle the voice prompts for things such as the mic being muted and low battery. There is a battery meter, which unfortunately doesn’t offer a percentage, but only different charging statuses. (Low, Medium, High, Full) Firmware updates can be done from the settings section, as well. Our Virtuoso required a firmware update upon installation and everything went smoothly.

Overall, the Virtuoso integrates well within iCUE, but I think some additional features for the mic and ability to adjust the RGB on the microphone would be nice future additions.

Let’s see how the Virtuoso stack up overall in my testing and conclusion, next.