As always we must overclock and push new technology to the edge and find the breaking points. Lately Legit Reviews has been going for stability and quality of our overclocks rather than showing a single benchmark and showing off unstable results. We tested overclocking on the Intel 955X, with both the Intel D955XBK and the ASUS P5WD2 Premium motherboard.  This was done since both motherboards offer slightly different memory dividers and performance levels.  In the end the ASUS P5WD2 proved to be the overclocking champ when used with the 0408 or newer BIOS.

We could get our test system to post and run at 266FSB with the 1066MHz memory divider, but the system was not 100% stable even with all the voltage options set to max other than the processor.  In the end we could hit 1060MHz at 5-5-5-12 timings with pretty good stability.  Performance scores were okay, but nothing great at the super loose timings. Next we lowered the timings to 5-3-3-8 and saw a nice increase in scores.  What was more amazing was the fact that 5-3-3-8 timings were stable all the way up to 1054MHz by using the 3:5 divider. This is what Sandra Buffered looks like at 1054MHz with an overclocked processor… 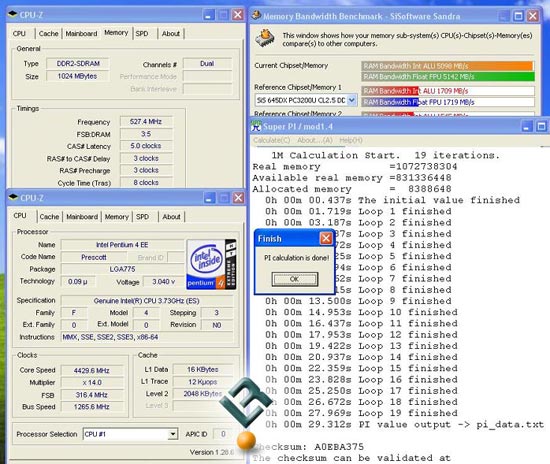 As on the top right of the above image the Sandra Unbuffered scores increased to 5,100MB/Sec!  When we first ran SuperPi it was 35 seconds and now it dropped down to 29 seconds, which is a good drop for the 1M Pi test.

Low latency DDR2 memory has been something enthusiasts, gamers, and overclockers have been waiting for since DDR2 first came out without luck.  Luckily enthusiast memory giant Corsair stepped up to the plate and hit a home run with their PC-5400UL memory modules.  These modules turned out to be dual purpose in our opinion as they can run tight timings (CL3) up to around 750MHz and then run all the way up to a 1GHz at CL5.  For the first time ever we are seeing numerous test samples hit over 1GHz and do it with stability! If you are looking to plug some modules in and run tight timings these will work perfectly.  If you are that die hard overclocker looking to hit over 1000MHz on your memory look no further!

In terms of raw performance the modules don’t shine like they should till the front side bus is raised.  When keeping the FSB at 266MHz only marginal bandwidth gains were noted, but when the FSB was raised above 300Mhz (QDR 1200MHz) the scores vastly improved. With new chipsets like the NVIDIA nForce 4 SLI Intel Edition and the Intel i955X Express now on the market Corsair has selected the perfect time to launch their 5400UL modules. I also find it ironic that these brand new modules already push the new chipsets to their limits in terms of memory bandwidth.   We were able to hit 1066MHz with some stability, but overclockers like “The Stilt” have already reached 1170MHz on volt modded motherboards with Corsair’s 5400UL memory.

At the 2005 Consumer Electronics Show (CES) memory companies were talking about hitting 700MHz or 800MHz in their test labs and how DDR2 sales are slowly picking up.  Like many others in the industry DDR2 didn’t look that good to us till Corsair brought out their PC2-5400UL part.  If you were waiting on upgrading to a DDR2 platform now might not be a bad time to take that plunge.  Intel and nVIDIA have released their new dual core chipsets, PCI-Express video cards are out in mass, and DDR2 memory has finally passed up DDR1 in terms of perfomance.  What are you waiting for?  Jump on the DDR2 bandwagon!  I’m sure our AMD fans will migrate over later when those next generation processors and boards come out.

A one gig kit of PC2-5400UL currently runs $240 shipped to your door, which is a heck of a deal for memory that can overclock over 1GHz if you are lucky and have the right hardware! Right now Corsair only offers the modules in 512MB capacities, but most people run 2 x 512MB anyway.   If you are looking for some DDR2 memory we have found that Corsair’s PC2-5400UL is the best that we have seen to date.  Add this one to the top of your memory shopping list!

Corsair once again proved to be the innovator and not the imitator in the memory industry. Corsair’s PC2-5400UL turned out to be so fast we are looking for another lawyer to fix all of our speeding tickets!