Have you ever run across a review web site that reviews a product and shows a couple amazing scores and gives it an award? Sure you do as most review sites do just that, but how stable was it? I would be willing to bet that most sites don’t know what stable memory what some of the memory companies use to test their modules? So did we, and we found out that they use the RAM Stress Test Professional 2 (R.S.T. Pro2). It is a Self-Booting, Operating System Independent memory diagnostic card for exercising and validating RAM. The R.S.T. Pro2 runs all tests in protected mode which can completely and thoroughly test up to 64 gigabytes of memory. This utility provides users the options of running sophisticated test patterns to detect hard to find memory errors, which are not detected by other test software. 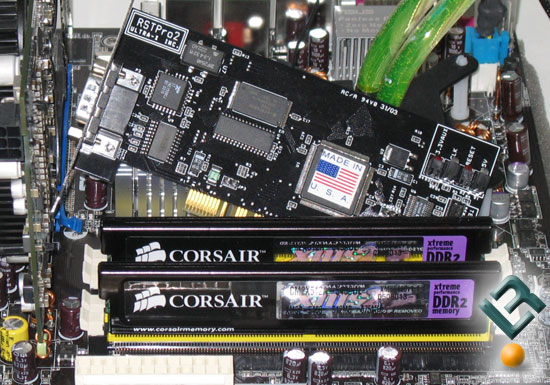 While using the R.S.T. Pro2 we were able to find memory errors that other testing methods could not find or reproduce. Since we want and encourage our readers to follow up our testing on their own, we also used the free testing program called Memtest86 which is a stand alone memory test for x86 architecture computers that boots off a floppy disk. This software was getting old was unable to run on all platforms, so we will stick to the RST Pro2 for the time being. In recent months Chris Brady and some of the guys over at x86-secret have come up with Memtest86+, which is an updated version of the original program and it still happens to be free.

We considered memory stable when it was able to run 1 extended pass of Memtest86+, twelve hours of Prime95/3dmark testing and ran without locking up while running all tests on the RST Pro2. People that work in the memory industry feel that if a single error is shown during RST Pro2 testing that the memory has failed testing and needs to be fixed. 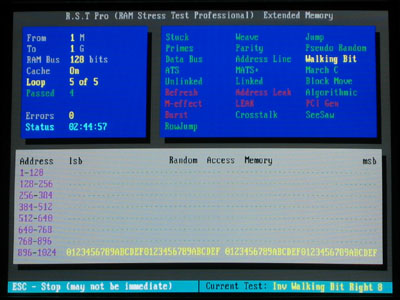 The RST Pro2 tested the Base/Extended memory and after 5 loops no errors were found! Memtest86 was used and confirmed these results.

We then went on using the RST Pro2 to find the highest stable memory frequencies that Legit Reviews has ever seen.  We broke over 1GHz on the memory and passed stability testing!  We talked to UltraX to make sure our RST Pro2 was able to test this high and they said no since we needed a firmware update.  We sent our card in for updating and got it back in and our stability testing results are now valid up to 1066MHz DDR2!

To reach the above stable overclocks we set the voltage at the max (2.3V) we went to the breaking point. This point is of course the spot where the modules started throwing errors. As you can tell the modules were only stable up to 733MHz at 3-2-2-8 timings, but when setting the timings looser watch out! These modules, like others we’ve seen using these IC’s, have tons of head room in them. At 5-3-3-8 our review modules reached 525MHz (DDR2-1050) and an amazing 530MHz (DDR2-1060) at the loosest possible timings. We were able to benchmark above these results, but the system was not stable beyond the above test results.