The Corsair K63 Wireless follows similar design to other Corsair keyboards and features the same compact tenkeyless frame of the original K63. Corsair has gone with a blue back plate and matching LED lighting on the K63 Wireless, instead of the red lighting that was featured on the original wired K63. The K63 Wireless exhibits minimal flex when doing a twist test and has a solid overall build quality, with nothing causing concerns over quality or longevity. There is minimal upwards sweep on the K63 Wireless, but the unit has a nice, ergonomic feel to it. 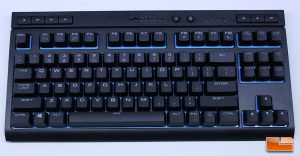 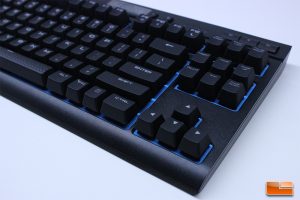 The frame of the Corsair K63 Wireless is manufactured from high quality plastic and is pretty tight, though the top bezel is a bit larger due to the integrated media controls. There is a deep indented line that runs between the top row of keys and the upper bezel of the K63 Wireless. This line adds to the aesthetic of the keyboard, but unfortunately it creates an area where dust and debris can be trapped. 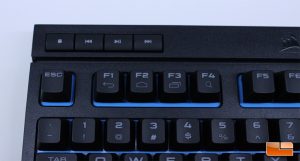 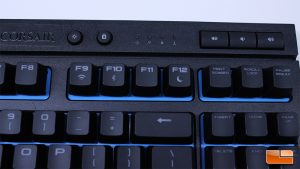 Corsair makes excellent use of the top bezel of the K63 Wireless, with a full set of media playback controls on the left side, volume controls on the right and Windows lock and LED adjustment buttons to the right of the Corsair logo docking the top center of the keyboard. The F9 and F10 keys are used in combination with the FN key to set the wireless mode between the low latency proprietary connection and Bluetooth. Only one device can be paired with the K63 Wireless at a time under Bluetooth mode.

A Corsair logo sticker docks the top center of the keyboard. This particular sticker is used on a lot of different Corsair keyboards and it is prone to catching cleaning cloths and pulling up, unfortunately. I spoke with Corsair about this and they said they experimented with different methods for placing the logo on the bezel, including screen printing, but that the sticker ended up being the best choice aesthetically. 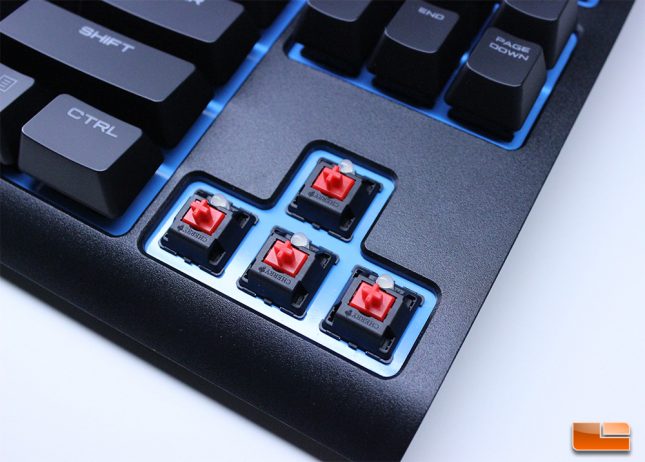 Removing the key caps from the K63 Wireless was an easy affair, though Corsair doesn’t include a cap remover and I had to use one of the ones I already owned. Removing the ABS key caps on the Corsair K63 Wireless reveals the Cherry MX Red switches, which have switch-mounted LED on the top portion of the switch housing rather than using PCB mounted LED’s. Corsair is using a light blue back plate with the K63 Wireless, which should look good with lighting enabled. 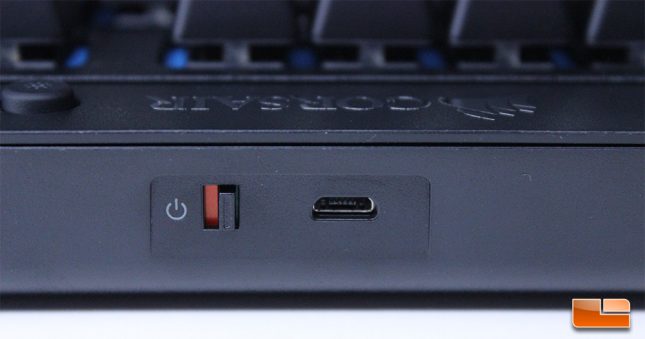 A USB port and power switch are on the rear of the K63 Wireless, placed in the center for easy, sensible access. I do wish that Corsair went with the modern USB Type C connector as opposed to a Micro USB connector, as it would make plugging in the cable properly for charging much easier and also be less likely to break over time. The power switchand offers a nice, firm action that doesn’t feel like it will become loose over time. The familiar large Corsair font is being used on the ABS key caps of the K63 Wireless, which should hold up decently, but will be prone to shine over time. As is the case with most of their keyboards, Corsair is using a non-standard bottom row on the K63 Wireless, so if you want to source replacement key caps, you’ll have to go with a solution specific to the Corsair key layout. Corsair recently released PBT key caps ($49.99 shipped) for their keyboards, which are really high quality and don’t develop the shine typical of ABS key caps. I really like the feel and quality offered by PBT key caps, so it is nice to have this option available on the K63 Wireless, though I would really like to see manufacturers including better key caps from the factory. 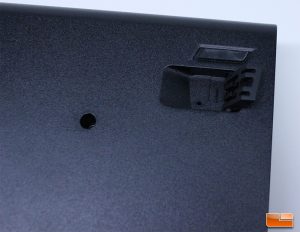 The bottom of the Corsair K63 Wireless has rubber isolation feet on each corner to keep the keyboard steady and there are single-level rear height adjustment feet. You can also see tab slots on the lower front end of the keyboard for the wrist-rest to slot into the keyboard securely.

The Corsair K63 Wireless worked properly right out of the box on my Z370 Gaming 5 motherboard and was recognized instantly by my PC at the UEFI level, allowing use before the keyboard even hit Windows and could load any drivers. Once Windows 10 loaded, the K63 Wireless worked instantly. Installing the latest version of Corsair CUE (2.23.40) from the Corsair CUE webpage went without a hitch and the software instantly recognized the K63 Wireless, which had version 1.01 of the firmware installed. Corsair CUE had a notice to inform me that there was a new version of the firmware available for the K63 Wireless and the process had some trouble completing until I switched to using the dongle and keyboard onto a different set of USB ports. Once the firmware for the keyboard was updated, CUE worked properly and recognized my K63 Wireless along with my other Corsair components.

The default section of CUE for the K63 Wireless has an overview of the board and you can select different profiles that have been saved to CUE. 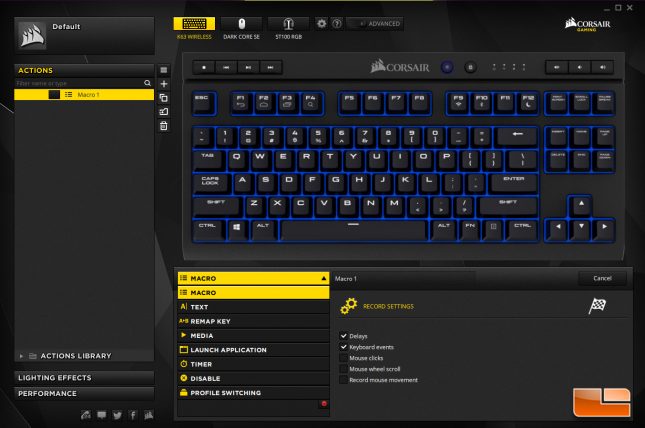 CUE allows for extensive per-key macro settings on the K63 Wireless, so any of the keys can be programmed for a specific function. Macro recording is available, as is key remapping, program launching, text entry and key disabling. 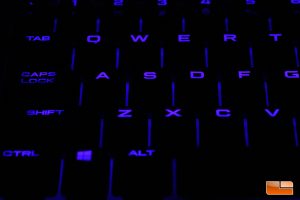 The Corsair K63 Wireless is limited to blue for lighting, but various lighting modes are available in CUE to suit whichever style fits bit. The lighting on the K63 Wireless looks excellent, with smooth, even effects across all of the keys, though due to how the LED has to be implemented on the Cherry MX switch, the lower portion of keys aren’t as lit as the upper portion on keys where legends extend past the top row of the key, CAPS LOCK for example. This is typical of any keyboard with Cherry MX switches, since the LED can’t be in the center of the key switch. Corsair could remedy this by going with a smaller single line font, but they seem to be set on their mega super large font. 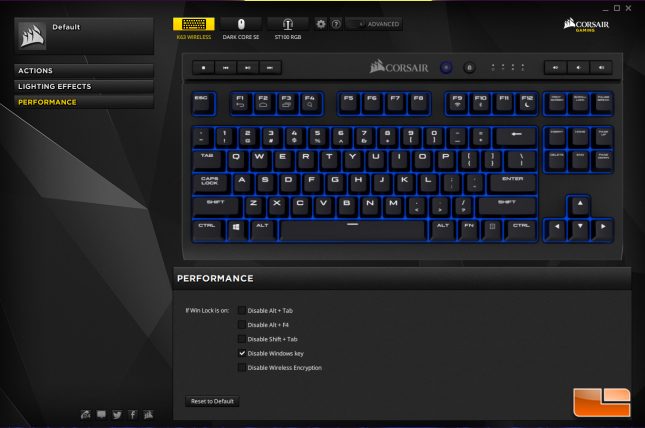 The performance section of CUE lets you disable certain key combinations in addition to disabling the Windows key. You can also disable the 128-Bit AES encryption, which will allow a slightly faster reporting rate in exchange for security. I would suggest just leaving the wireless security encryption on for a majority of users, as it introduces an indiscernible delay and keeps your key presses secure from snooping. If you are doing something where input latency is so critical that the 128-Bit AES could cause an issue, I would recommend just plugging in the K63 Wireless.

Overall, Corsair CUE allowed for an excellent amount of control over the K63 Wireless and worked quite well. I had an occasional issue where if my system went to sleep and I came back, CUE wouldn’t detect the K63 Wireless until I unplugged and plugged in the dongle, even though the keyboard was working just fine. I brought this up with Corsair and they said they would look into the issue. 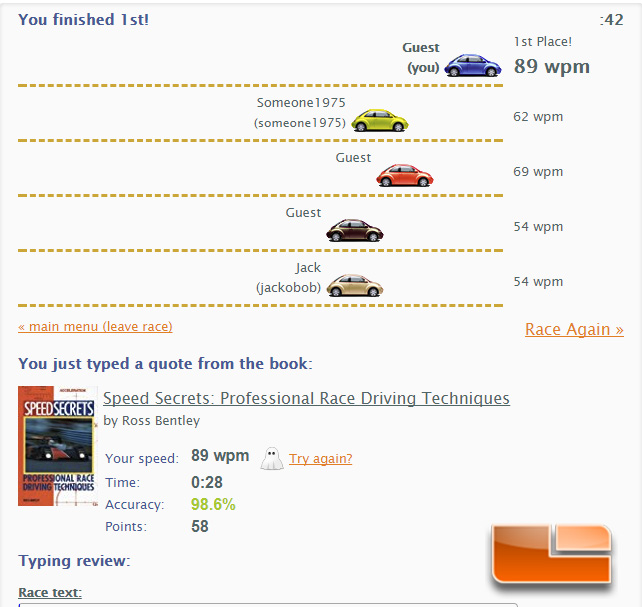 Typing on the K63 Wireless was a natural affair, as I am used to Cherry MX Red switches and Corsair has implemented them well here, with each switch offering a consistent typing experience, with proper stabilizers used on the necessary keys. The ABS key caps on the K63 Wireless are smooth and feel good under the finger, with a slight texture felt on the key legends due to the print process used. I was able to reach my typical 90 WPM average on the K63 Wireless during my first round of testing with Typeracer. The independent media keys on the K63 Wireless were implemented well, offering smooth linear actuation and they are a very thoughtful inclusion on a keyboard that may see use on an HTPC.

When typing on the K63 Wireless, there is a noticeable “ping” sound produced by the switches resonating against the back plate. This type of sound is common in a lot of keyboards, but coming over from my Ducky TKL RGB, which is one of the more solid, well-manufactured tenkeyless keyboards on the market, the “ping” of the K63 Wireless was very noticeable. Once I used the keyboard for a bit, the sound became tolerable and I stopped noticing, but if you prefer keyboard on the quiet side of the spectrum, the K63 Wireless definitely isn’t the one for you. I will be trying Corsair PBT key caps in the future to see if that helps quiet things down, as PBT does tend to thud more than than it clacks.

For gaming, the K63 Wireless was an absolute joy to use, registering key presses accurately and consistently. The textured space bar on the Corsair K63 grips well without being uncomfortable and is nice to have for games like Dead By Daylight, where space bar spamming is necessary. When testing the Corsair K63 Wireless against the Logitech G613, another low latency wireless mechanical keyboard, I didn’t notice any performance differences between the two keyboards and input lag was not perceived, with each keyboard totally being usable for gaming. I had no qualms using the Corsair K63 Wireless to play competitive games like PUBG and even won a Chicken Dinner along with Legit Reviews Editor in Chief Nathan Kirsch the first time I played with the keyboard.