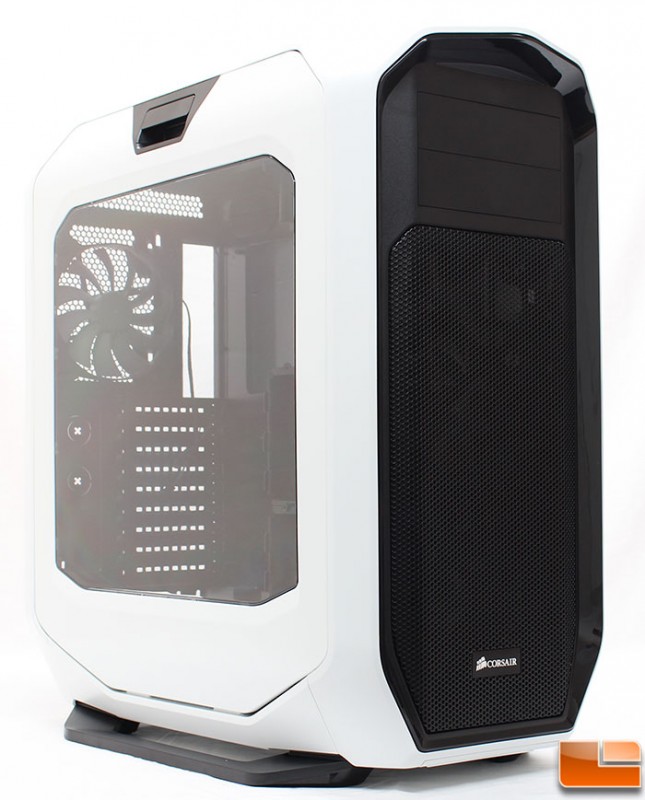 The majority of the front panel is a wire mesh to provide a large amount of airflow into the case. 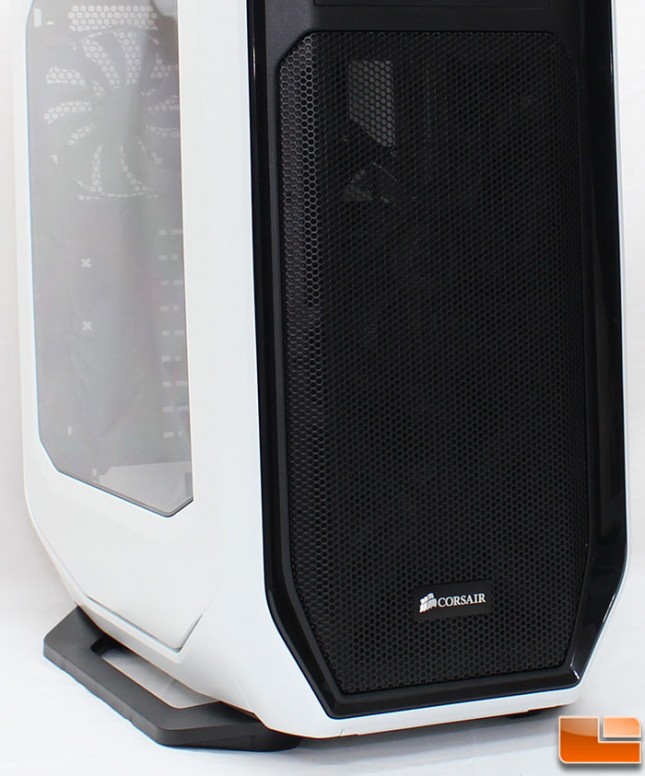 As we have seen from Corsair in the past, the wire mesh area is held in place by two push clips.  When the mesh is removed, we can see that Corsair has installed a simple filter to help keep dust out of the case.  Behind the mesh we find the two included 140mm fans, which are models A1425L12S-2-L  which has speed of 1,000RPM, pushing 54.0CFM at 20dBA, and includes LED’s.  If preferred, these could be swapped out for three 120mm fans. 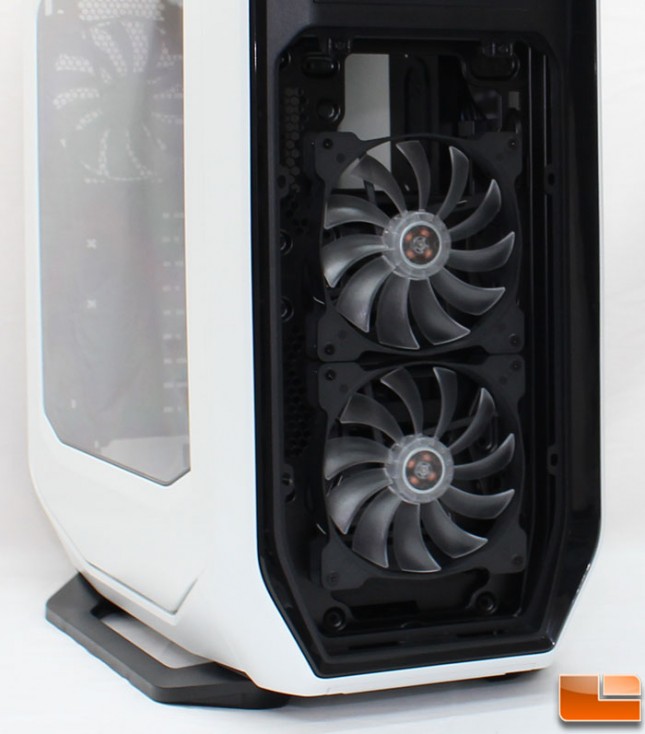 The main side panel has a handle at the top rather than the back.  This allows the side to open by pulling the panel down instead of out.  The window on the side panel measures 15.5in x 14.0in (W x H).  It is large enough to allow for a nearly unobstructed view of the motherboard components, and most of the 3.5″ drive trays.  The power supply is hidden behind the panel.  Around the edge of the door is a gap, which initially made me wonder if the panel had gotten damaged in shipping, so taking a closer look at the pictures provided by Corsair, I can see the gap is intended.

The back panel we find nothing unique, everything we expect to find on an enthusiast level case.  A standard ATX power supply opening is found at the bottom, with nine expansion slot covers next to that.  Above the expansion slot covers is two liquid cooling tube holes, and a Kensington cable lock slot.  The standard exhaust fan is a 140mm AF140L, with the motherboard I/O key below the fan.  Finally, at the top of the case is a large vented area, which while it isn’t large enough for a fan, it does provide some additional airflow and space for liquid cooling radiators.

On the right side panel, we find the same kind of fold down door as the other side.  However, this one is solid. 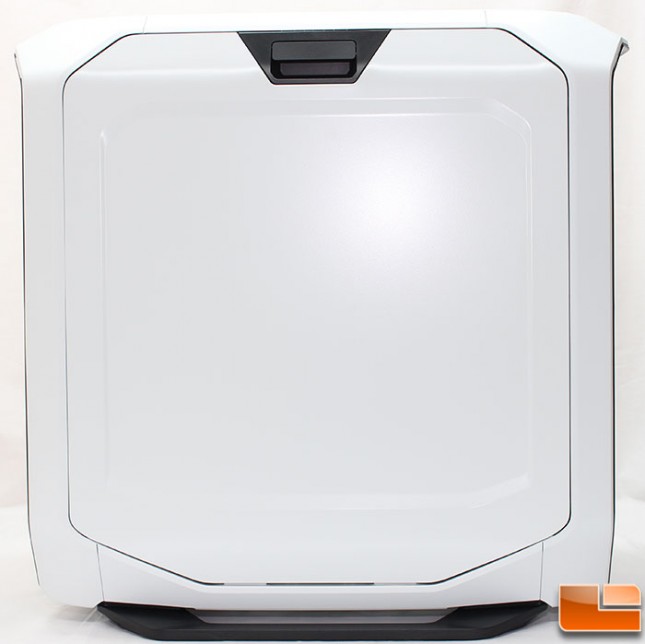 Taking a look at the top panel, we find the typical front I/O cluster, which includes two USB 2.0, two SuperSpeed USB 3.0, headphone, microphone ports, power and reset buttons.  In addition, there is a three speed fan controller built into the Graphite 780T, which is a nice addition with the number of possible fan locations.  The rest of the top panel is a wire mesh area that can be removed by pressing down at the front of the mesh area.

With the wire mesh removed, we can see the top portion of the frame.  Here, there is room for three 120mm or two 140mm fans. Liquid cooling options here can support up to a 360mm radiator.

Switching focus to the bottom of the case, we can see the two large feet on the Graphite 780T has anti-slip rubber feet attached.  The bottom is covered in filters, which can be removed. 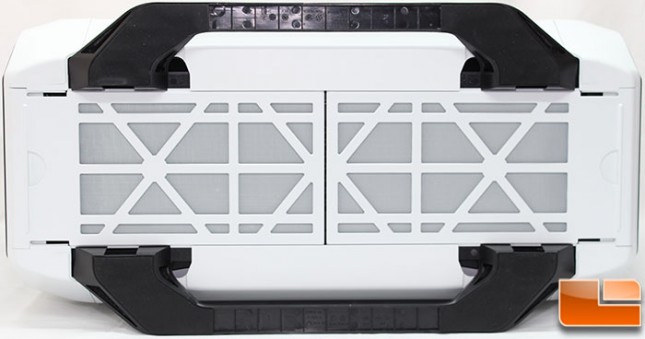 The bottom filters slide out the front or back of the case, depending on which one you wish to remove.  These filters measure 11in x 5.5in. 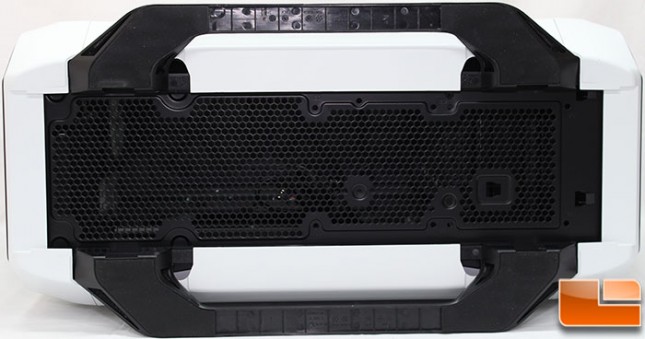