Getting Answers From The Man Behind The Memory: John Beekley 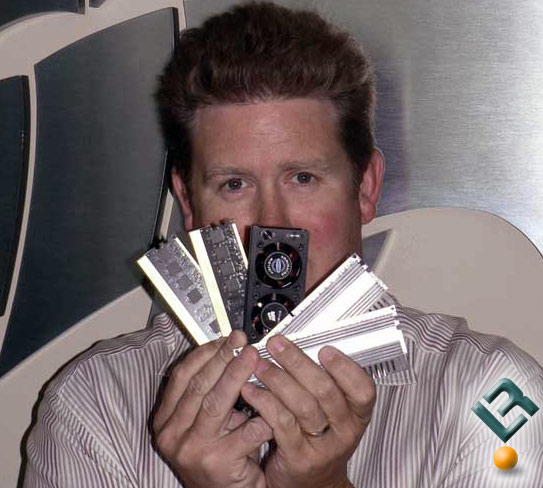 LR: Welcome John, and thanks for taking the time to talk with us. Tell us a little about yourself, your role with Corsair Memory, and the company itself.

John: Well, I’ll try to keep it short and sweet, since I know that many of your readers are probably pretty familiar with us already. Corsair is quite simply the supplier of the world’s finest computer memory, and has been around for twelve years. I am one of the three cofounders of the company, and have worn various hats in Marketing and Engineering. Right now I am VP of Applications Engineering, which means that my crew and I are in charge of product definition, component characterization, technical publications, partner relationships, tech support, web-based knowledge tools, and other fun stuff.

LR: Six months ago Corsair sent out Application Notes number AN601, which tested heat spreader type on the Overclock-ability of a single memory module in a highly controlled environment. It was found that the use of a heat spreaders on modules increase the overclock-ability in all cases. Did you start designing the therminator, later renamed dominator, around this time period? Basically what made you go through with this idea?

John: We started work on this concept around the same time. Basically, the testing that we did on existing heat spreader types started spurring some serious thinking about what we could do to create a module thermal solution with truly superior performance. So we started brushing up on thermodynamics, doing some designs, and running some experiments.

LR: Corsair has referred to the Dominator modules as having heat sinks. A heat sink is usually a metallic heat exchanger designed to absorb and dissipate excess heat from an object. Can you explain why a heat spreader is not a heat sink and why the DHX based modules have a heat sink?

John: The distinction is perhaps a little subtle. A heat spreader is designed to take heat from a point source and spread the heat over a larger area. A good example is the heat spreader on the CPU, the part on the package that you install the HSF to. A heat sink, on the other hand, is designed specifically to not only absorb and spread the heat, but also to radiate it. And, in my mind, heat sinks must have specific design features for heat radiation, such as fins.

LR: Does this mean that non-DHX modules can?t be upgraded with these heat spreaders?

John: DHX modules have a custom PCB as well as heat sinks. So, while you could put DHX heat sinks on a standard module, you will not get the benefit of the conductive thermal path through the copper in the circuit board. Not something we’re really considering…

LR: Are these the first true heat sinks for memory modules?

John: The first heat sinks on memory modules? I’m sure this distinction belongs to something from the mainframe days, perhaps the first solid state computers. In the PC enthusiast world, the Corsair PRO series would have to take that distinction, as its design incorporated fin-like ribs to radiate heat. And, performed pretty well, I might add. DOMINATOR’s better though.

LR: The Dominator Airflow brings something old back to being new again. We have seen active memory cooling now for years. I remember using a Thermaltake Active Memory Cooling Kit back in 2002 on my Corsair PC-3200 and PC-2700 memory modules and never noticed a difference. Why are you bringing back active cooling to the enthusiast community?

John: It’s pretty simple. Airflow helps dissipate heat. And dissipating heat improves performance and reliability. A small fan with no heat sink is not going to do much good. But a fan unit with three fans that provides impinging airflow to heat sinks that are specifically designed to take advantage of this airflow, that provides real benefits. And we believe these benefits are worth bringing to the community.

LR: Speaking of high performance memory cooling where are the memory module water blocks to use in conjunction with the Nautilus 500?

John: They are still on the drawing board, I’m afraid. Water cooling memory provides some real challenges. Memory sockets are only three tenths of an inch apart, and some popular performance boards use adjacent sockets. That means, you have three tenths of an inch for the memory module and TWO cooling blocks, one for each side. It simply can’t be done. Theoretically you could put a long and thin block at the top of the memory, and try to draw the heat up to it. But efficiency would really suffer here. So we are still scratching our heads…

LR: Looking into the future will all high performance Corsair XMS modules feature these heat sinks meaning the end of heat spreaders for Corsair?

John: Our existing heat spreader continues to be very popular with our customer base. I think we’ll still be selling that product for quite some time.

LR: Some of our readers are having sticker shock when it comes to the Twin2X048-8888C4DF memory kit, which is priced at $650 MSRP. Can you explain to our readers why such high pricing for your new flagship series?

John: Flagship parts are generally very difficult to produce, it takes extraordinary effort to build them. First, there is lots of engineering time spent developing the necessary RAM screens, then lots of laborious RAM screening that goes into each module. There are inventory issues also – if, say, only 5% of the very expensive RAMs you just bought will yield the flagship part, you need to figure out what to do with the other 95% of the RAMs you just paid extra for. So, a lot of the screening and fallout costs get built into the top-end part.

LR: It?s obvious that not everyone can afford PC2-8888 memory, so what?s in store for everyone else.

John: DOMINATOR materials and assembly are not intrinsically expensive, and will reduce in price as we ramp into volume. Right now we are launching an 8500C5D DOMINATOR that will sell for a premium of only about ten bucks over the non-DOMINATOR part. My guess is that over time, this premium will get even smaller. So, over time our goal is to have a DOMINATOR for every enthusiast system and budget!

I’d like to thank John Beekley and everyone at Corsair for taking the time out of their busy launch schedule to sit down and brief Legit Reviews and our readers about their new technology. I’m sure you’ll see more of John Beekley and I the next time a new innovative product is launched!