Just a short few weeks ago, we took a look at a slightly older Cooler Master all-in-one liquid CPU cooler – the Nepton 280L. That cooler has been on the market for nearly a year, which gave Cooler Master enough time to come up with a more refined version. We’re going to take a look at the smaller sibling called the Nepton 240M. Don’t be fooled by the name and the fact that it is smaller, as Cooler Master promises a quieter and similar performing package than what the 280L offered.

There isn’t a whole lot new with the 240M vs. the 280L, but one major component that was switched up were the fans. Where the Nepton 280L included JetFlo 140 fans, the Nepton 240M includes the new Silencio 120 fans. These new fans are designed to be far superior in terms of static pressure and noise level. A higher static pressure at 4.5mm H2O vs. 3.7mm H2O with the JetFlo 140 will allow for superior cooling potential. Not only do these have better cooling potential, but they’ve also gotten quieter. The Silencio fans have a max noise level of approximately 27 dBA, which is astonishingly quiet when rotating at 2400 RPM. This is all achieved thanks to a unique fan blade design 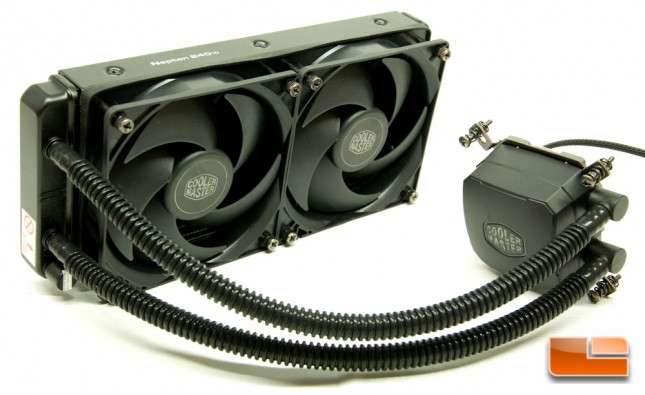 The pump is also designed to be significantly less noisy, though with the 280L, the pump was already barely audible. You’ll find the pump in the Nepton 240M to peak at 15 dBA. Underneath the pump you will find the same large skived fin copper plate. This plate was designed to

You’ll also find the FEP tubing on the 240M, which is in place to not only limit evaporation to an extreme minimum, but also prevent kinks in your tubing, resulting in flow loss. No kinks will result in better thermal transfer and a happier processor. 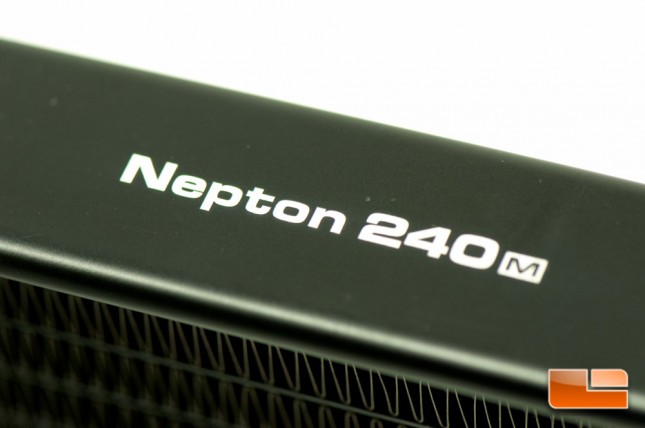 Like the Nepton 280L, you will receive a full 5-year warranty with your new purchase. We really appreciate seeing manufacturers back their products this long!

** The Fan Current and Power Consumption were not listed on Cooler Master’s website, however a product guide that we were sent had this information. The Silencio 120 fan itself says 0.16 Amps on the sticker on the backside, which translates into 1.92 Watts. The Nepton 280L’s fans physically say 0.8 Amps, not 0.3 Amps like listed on Cooler Master’s website, which translates into 9.6 Watts instead of 3.6 Watts.

In the coming pages, we’ll see how difficult or easy the Nepton 240M is to install, and run a few tests against it – comparing it to the other liquid coolers that we’ve reviewed. Before we get to those pages, let’s take a look at the packaging and the included goodies inside the box.