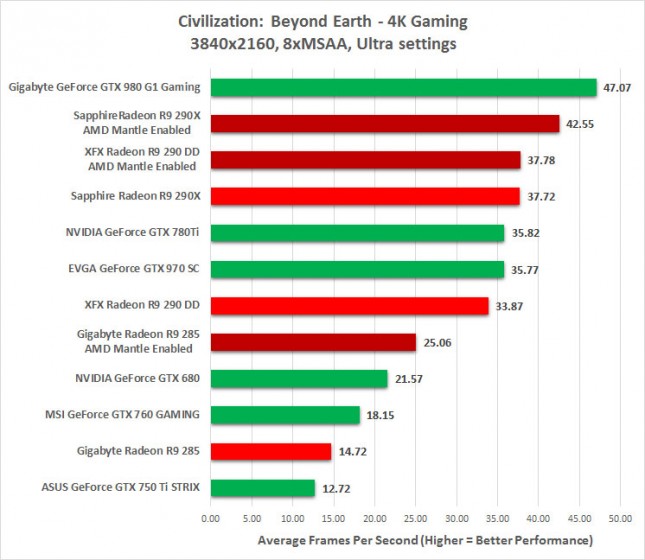 With Ultra image quality settings and 8xMSAA we figured that many of the high-end video cards on the market today would struggle to run Civilization: Beyond Earth at a 4K resolution, but we were shocked to see that wasn’t the case on this game title. The graphics in the game don’t look too punishing and the benchmarks show that is most certainly the case here today. Users with older video cards like the NVIDIA GeForce GTX 680 will find that they will be in need of an upgrade, but GeForce GTX 780 and above gamers will be able to run the game just fine at 30FPS and above at 4K. The AMD Radeon R9 290 and 290X video cards performed well at 4K resolutions and most certainly benefited from the Mantle as the API was able to improve the average FPS by a good 4-5 FPS. Even with the Mantle API the Radeon R9 290X with Catalyst 14.9.2 beta drviers was unable to catch the Gigabyte GeForce GTX 980 G1 Gaming video card with GeForce 344.48 WHQL drivers. It should also be noted that AMD has added overhead reducing DX optimizations to their DX11 drivers some months ago, but they have more optimizations coming for Civilization: Beyond Earth that are not in GeForce 344.48 drivers. We aren’t sure how much this will boost NVIDIA GPU based cards in the future, but they say more improvements are in the works. 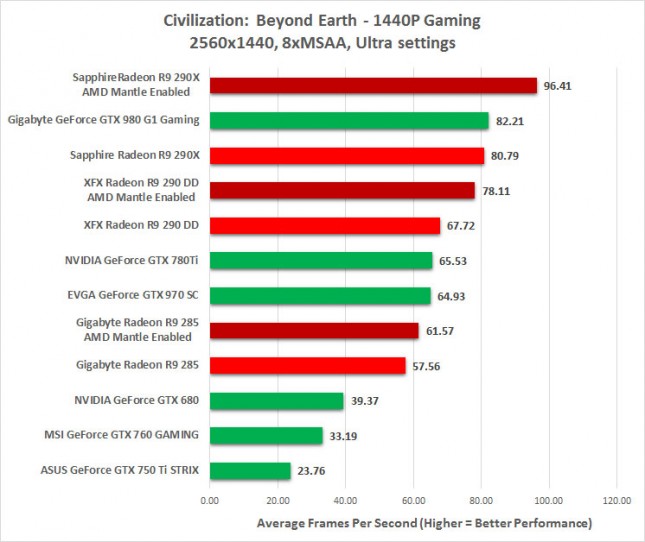 When we tested at the 2560×1440 screen resolution we found that the Sapphire Radeon R9 290X with the Mantle API enabled was able to top the performance chart. The Gigabyte GeForce GTX 980 G1 Gaming was just ahead of the Sapphire R9 290X when both cards were running DirectX 11. The XFX Radeon R9 290 Double Dissipation Edition video card was just a couple frames per second faster than the NVIDIA GeForce GTX 780 Ti reference card and the EVGA GeForce GTX 970 Superclocked ‘Maxwell’ video card. We were pleasantly surprised to see the MSI GeForce GTX 760 GAMING was able to average over 30 FPS at 1440p. This just goes to show that you can game at WQHD resolutions and don’t need to spend a fortune on a video card to get a good gameplay experience. 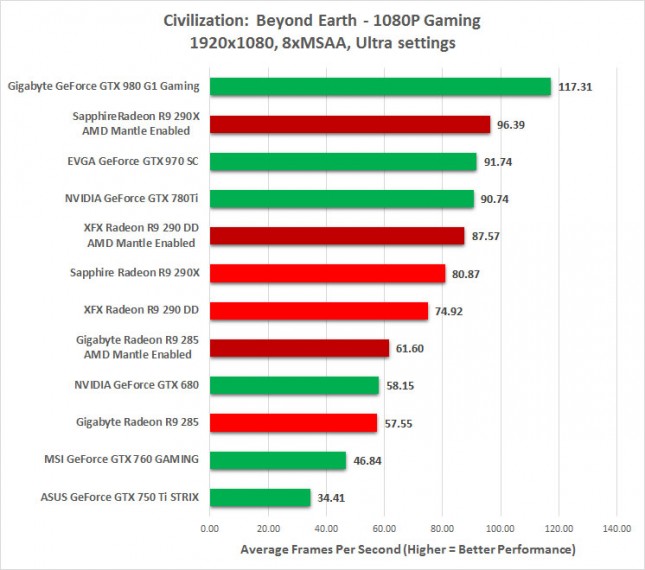 For those that are still gaming at 1080P you shouldn’t have much of an issue with most high-end graphics cards as the MSI GeForce GTX 760 GAMING was averaging 46.84 FPS and the relatively old NVIDIA GeForce GTX 680 reference card was able to turn in a very respectable score of 58.15 FPS. The Sapphire Radeon R9 290X video card turned in basically the same scores at 1440P that it did at 1080P, which is a bit odd and we don’t have an explanation for that. The XFX Radeon R9 290 DD performance improved as the screen resolution went from 2560×1440 to 1920×1080, but for some reason we didn’t see that on the Radeon R9 290X and we triple checked the numbers and they were spot on.

The AMD Mantle API appears to improve gaming performance by about 12% at 4K resolutions on the Radeon R9 290 and 290X video cards. This is a pretty substantial performance improvement and one that is most certainly welcomed at such a large resolution. The bad news for AMD is that the NVIDIA GeForce GTX 980 is a beast of a card and even with the Mantle API, the AMD Radeon R9 290X has a hard time surpassing NVIDIA’s flagship video card.

We are going to conclude this performance article about Civilization: Beyond Earth as there is no reason to spend more hours benchmarking and testing various cards. We’ve had access to the game title for just a couple days and there have been three builds of the game released since we have begun trying it out. NVIDIA also came out with GeForce 344.48 WHQL drivers yesterday, which we used for our performance tests today. NVIDIA has driver optimizations in the works, AMD will be releasing a public version of the Catalyst 14.9.2 beta drivers that we were using and there are more game patches coming from Firaxis on launch day. Nothing like new drivers and a day zero patch to make your benchmark numbers obsolete just days after they are posted! 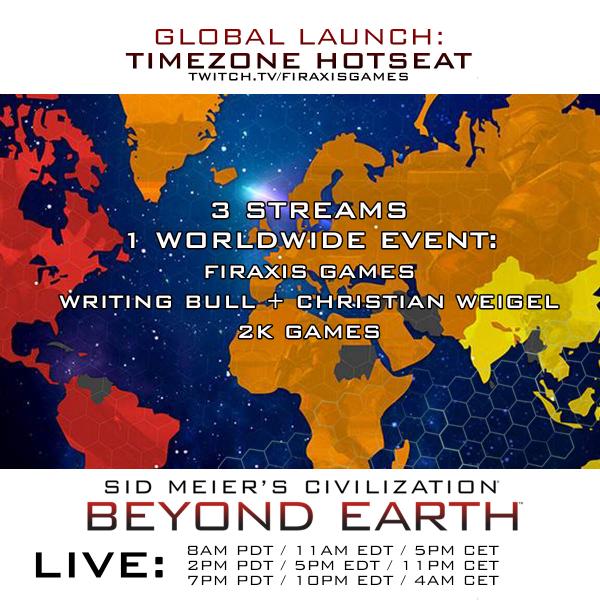 Civlization: Beyond Earth is available to pre-load now and releases this Friday, October 24th. Gamers who have already pre-ordered Civilization: Beyond Earth will receive the Exoplanet Map Pack at launch, which adds six custom maps to the game’s lineup. The #BeyondEarth launch event has also begun and you can watch it live here. http://www.twitch.tv/firaxisgames