Our Favorite SSDs From CES 2020

When Legit Reviews was at CES 2020 we had meetings with nearly a dozen storage companies at the show and got a chance to talk to them about their new products for 2020. Not all the information made it up the site during the show, so we put together a quick article covering the best SSD highlights from CES 2020!

Lexar was back promoting new products at CES 2020 and they had their upcoming NVMe PCI Express 4.0 x4 M.2 SSD on display in their suite. This drive manged to get a ton of attention during the show since it was capable of reaching wicked fast speeds as an early prototype. On a CrystalDiskMark run that we ran in the room we managed to hit sequential speeds of 7,241 MB/s read and 5,732 MB/s write. These speeds are impressive, but this drive is not ready to reach the consumer market just yet as they have more firmware work to do. In fact, we ran CrystalDiskMark several times and we couldn’t get it to complete a full pass. We weren’t able to run a full set of Random 4K benchmarks ourselves, but Lexar says it is currently capable of reaching 60 MB/s read and 320 MB/s write at a queue depth of one. 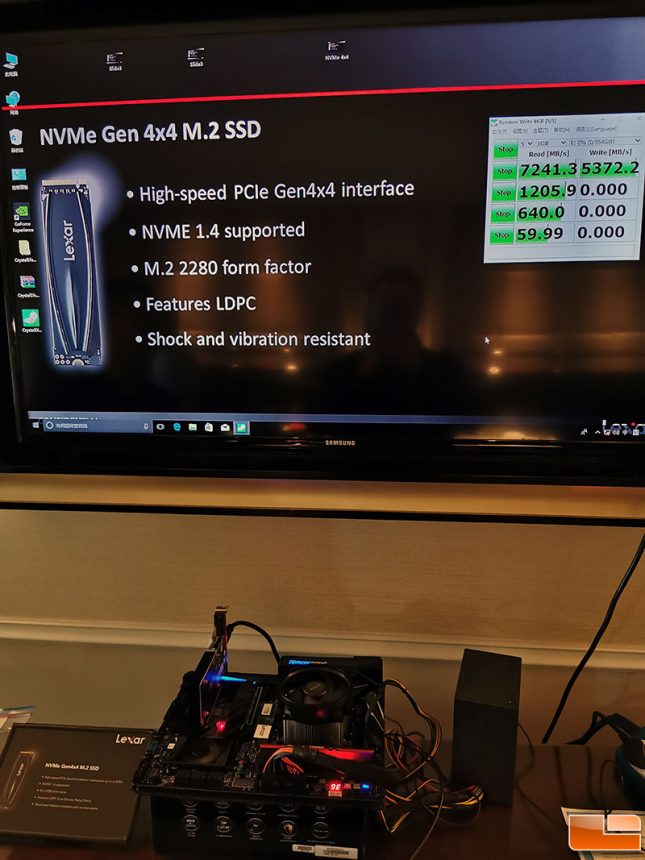 The image of the Lexar NVMe Gen 4×4 M.2 SSD on the placard and monitor show a M.2 2280 drive with a black heat spreader, black PCB and sharp right angles at the corners of the PCB. Keep that in mind as we move along to ADATA. 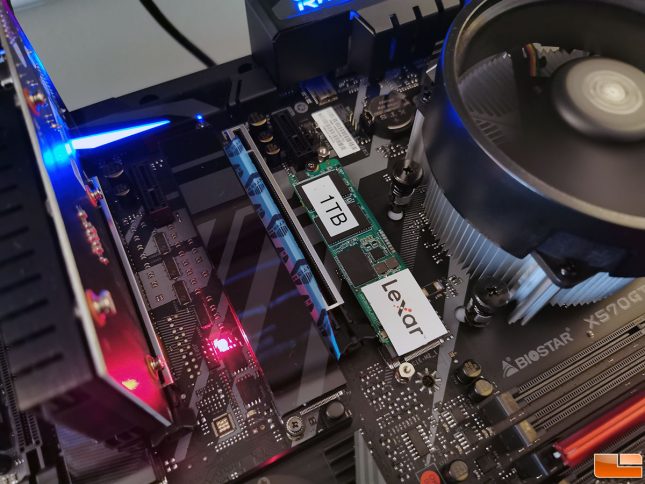 The drive that was actually running in the test system at CES 2020 had no heat spreader, a green PCB and rounded corners. 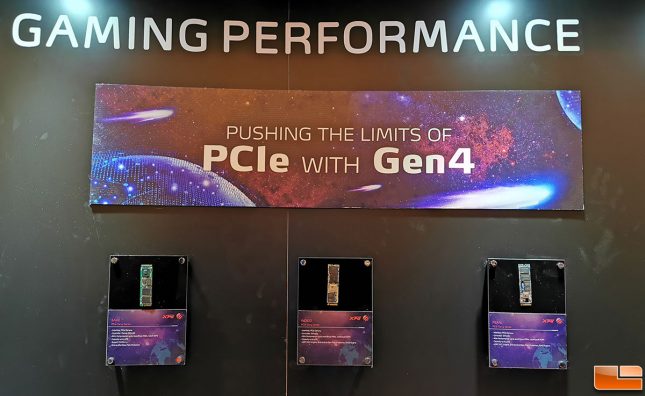 ADATA – Pushing The Limits of PCIe with Gen4

Next up we have ADATA who had a very large showing of prototype drives at CES 2020. Their flash new PCIe Gen 4 SSD that was making headlines was called Sage. This drive was shown on a test system in the demo area reaching 7,241 MB/s read and 5,395 MB/s write. These are basically the same exact numbers that Lexar was showing off. ADATA went a bit further thought and listed that it was capable of up to 1,000,000 IOPS of Random 4KB performance. 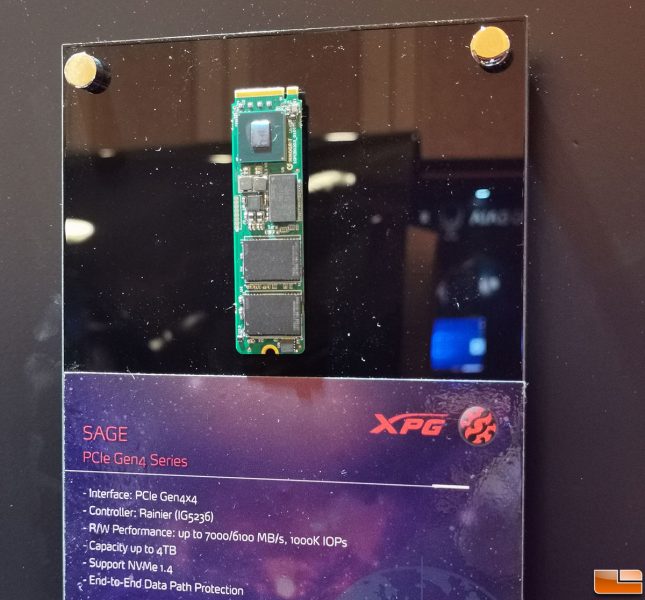 ADATA was a little more forthcoming with information on their drive and proudly displayed that it used the InnoGrit ‘Rainier’ IG5236 controller. InnoGrit was founded in 2016 by industry veterans from Micron and other respected corporations. It appears that they are are breaking out as a leader in PCIe 4.0 SSD controllers here in 2020. 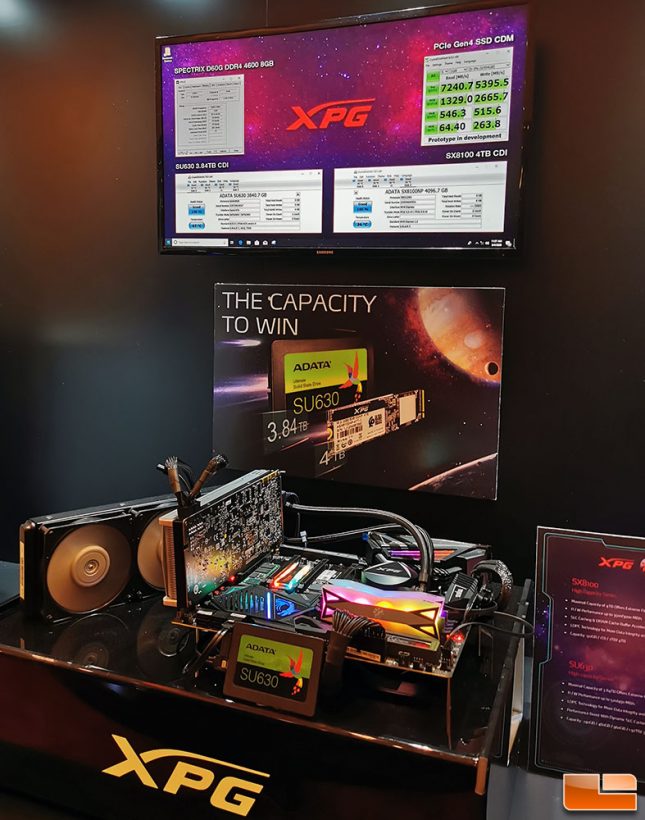 The Rainier controller is built using  TSMC’s 12nm FinFET process and features 8 NAND channels that run at speeds up to 1200 MT/s. Drives up to 16TB in capacity are supported and Innogrit is hopeful that Rainier can reach sequential read speed of over 7 GB/s and write speeds over 6GB/s. Random 4K performance on Rainier is up to 1 Million IOPS read and 800,000 IOPS write. This is the closest that we’ve heard of any controller company coming to saturating the PCIe 4 x4 interface! This Innogrit controller is not only fast, but it also happens to be power efficient with idle power being under 50mW and under 2mW when a PC is in a sleep state.

BiWin is also using the Innogrit Rainier controller for their NW200 SSD. BiWin is also the ODM behind HP branded consumer SSDs, so get ready to see a good number of Innogrit drives in 2020. Right now we know for certain Lexar, BiWin (HP branded drives) and ADATA are all working with InnoGrit and it would be safe to assume others are behind the scene.

ADATA was also showing off their Indigo series prototype drive that was based on the SMI SM2264 8-channel controller. This drive wasn’t shown in a live demo, but the sign claims that it can reach sequential speeds of up to 7,000 MB/s read and 6,000 MB/s write. The random 4K performance was shown as being up to 700,000 IOPS for both read and write performance. This PCIe Gen4x4 drive uses the standard M.2 2280 form factor and will be available in the usual capacities up to 4TB. This SSD series also has LDPC ECC and RAID engine support along with end-to-end data path protection. 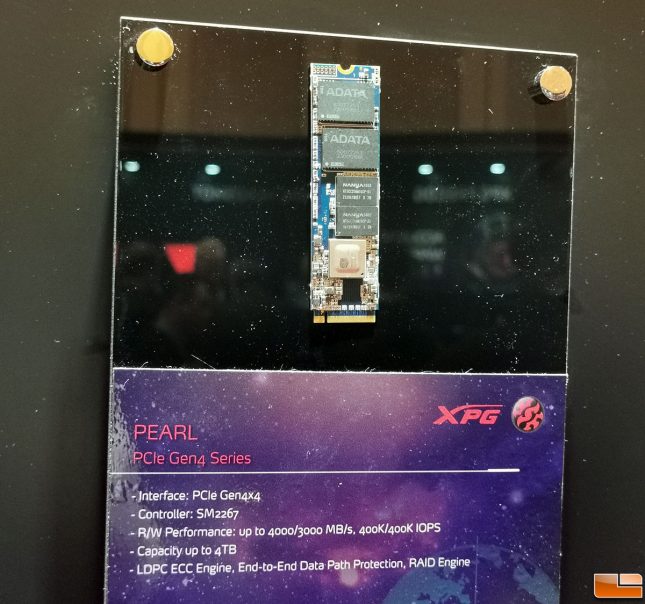 Next up we have have the Pearl series of PCIe Gen4x4 drives that uses the SMI SM2267 4-channel controller. One might think that the SMI SM2267 controller would be faster than the SMI SM2264 controller due to nomenclature, but don’t let that be misleading. This drive will likely be a little more affordable to end users since it uses a smaller controller that is capable of lower peak speeds. Sequential performance on this drive comes in at up to 4,000 MB/s read and 3,000 MB/s write. The Random 4K performance is at up to 400,000 IOPS for both read and write. The ADATA Pearl series also has LDPC ECC and RAID engine support along with end-to-end data path protection just like the Indigo series. 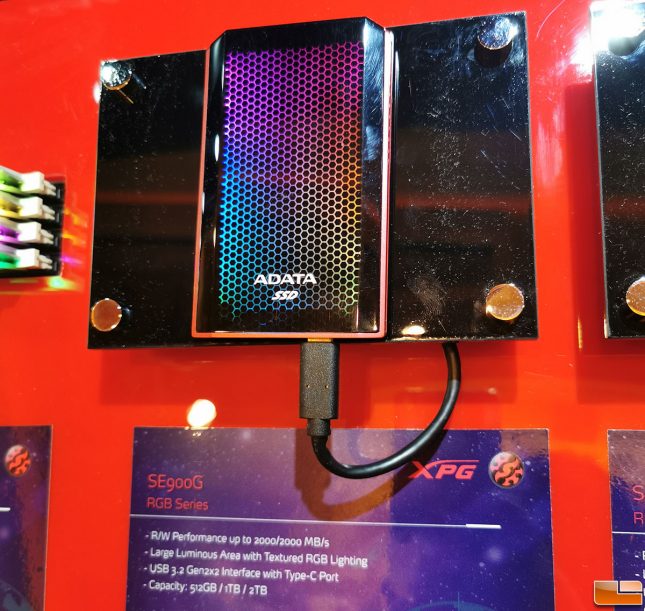 ADATA XPG was also showing off the SE900G RGB Series of portable SSDs. You can get one of these RGB lighted drives in 512GB, 1TB and 2TB capacities with the USB 3.2 Gen 2×2 (20Gbps) interface. On a compatible host device with a matching USB 3.2 Gen 2×2 interface you’ll be able to get up to 2,000 MB/s read and write speeds from this drive. The surface of the drive is black until it is plugged in and then the RGB lighting kicks in like you can see form the image above. 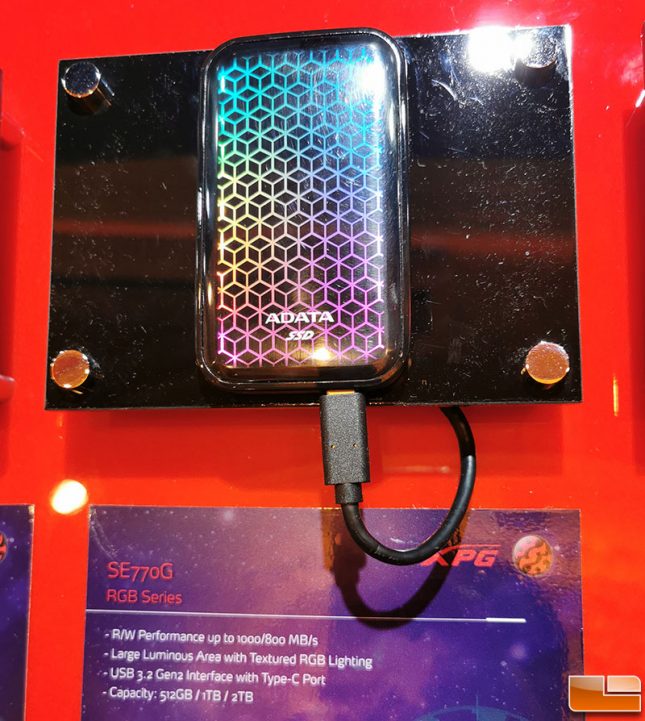 It might be a bit before you get a desktop or laptop computer that has USB 3.2 Gen2x2 support, so you might be looking for something a little less expensive. ADATA has you covered again with the XPG SE770G RGB series that uses the USB 3.2 Gen 2 (10Gbps) interface. It is available in the same capacities and still has RGB lighting, but tops out at 1000 MB/s read and 800 MB/s write. Another bonus to this drive is that it has a smaller overall footprint than the SE900G.