After being able to sit down and benchmark a pre-production Kentsfield processor with 8MB of cache running at 2.66Ghz it was obvious that it was faster than Conroe on the limited numbers of applications that Intel allowed us to benchmark. With some applications running ~80% faster than the leading Conroe processor it’s clear that Intel has another winner on their hands. Intel has been up this road before, but never has it gone this smoothly.  Many of you might remember when Intel took two Prescott cores and combined them to make Intel’s first dual core processor by ‘bolting’ them together.  It seems that Intel repeated the process using a pair of Conroe cores and the end result is Kentsfield.  As we pointed out in our coverage yesterday Kentsfield has been officially renamed Core 2 Quad as Core 2 Duo is for dual core processors (Uno, Duo, Quad…Octa?). 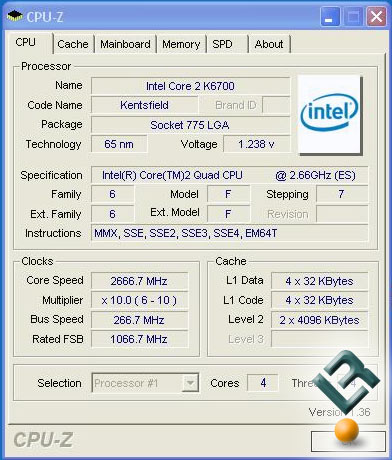 We leave IDF with a number of question marks though, but that is why this is a preview on pre-production hardware and not a review that was done in our own independent test lab. From our understanding Intel has not finalized the cooling solution, but Intel PR has confirmed with Legit Reviews that the Core 2 Quad Extreme processor will be launched in November with air cooling just like the current Core 2 Extreme X6800 processor.  Intel was also not sure what the final voltage would be for the processor and throughout the show we saw a test systems running between 1.25V and 1.50V being used on various test systems. Another area that will be interesting to see development in is the support of Enhanced Memory Profiles that will be featured in upcoming BIOS revisions of Bad Axe 2.  Many enthusiasts already know that AMD and Intel platforms already run DDR2 memory, but require different voltage and timings settings to run on each platform. There is only a limited amount of space in the SPD for programming and with Intel following strict JEDEC settings will Intel allow memory like Corsair’s PC2-8888 modules to run at over 1.1GHz with the memory voltage at 2.4V?

Overall we have been impressed by quad-core and what it will be able to offer enthusiasts down the road.  Seeing upcoming DirectX 10 games like Alan Wake and benchmarks along the lines of Ice Storm Fighters push the processing limits of dual-core processors in upcoming months quad-cores will be the choice of enthusiasts and gamers around the world. Kentsfield really has lived up to the hype and has now become the Quadzilla of processors hands down. With AMD’s 4×4 platform still in the works it will be interesting to see how everything turns out.  After seeing the benchmark numbers for Intel’s quad-core single chip solutions we hope that AMD has something really good in the works.  Competition is good for consumers and with Conroe being 40% faster than the pervious generation processor and Kentsfield being 70% faster than Conroe Intel has shown that they have really gotten their stuff together.

When it comes to overclocking we saw a small dose at IDF and the systems that Intel were showing were all water cooled and were running between 3.5GHz and 3.66GHz, which goes to show that their cores have plenty of headroom available in them.  As we pointed out in our Bad Axe 2 and QX6700 overclocking article a number of improvements have been made to the Intel D975XBX2 motherboard and the overclocking potential on an Intel desktop board has never been better.

To keep from rambling on and on we’ll rap this all up.  On behalf of everyone at Legit Reviews we’d like to thank Intel for letting us benchmark Kentsfield on pre-production hardware and that our readers have a better insight as to what Intel will be coming out with in November.  The hardware industry has has changed drastically over the past few months and LR is trying our best to show you the light at the end of the tunnel.

Be sure to read all of Legit Reviews Fall IDF 2006 Articles: