The Azio Armato is aesthetically similar to some of the other gaming keyboards we’ve seen on the market, with the aluminum faceplate and bold fonts immediately standing out. There is a standard layout in use here, albeit wtih some additional functionality up its sleeve, such as the five dedicated macros and toggled media controls. The bottom row is standard, with each of the keys measuring at 1,25″ and the spacebar coming in at 6.25″, which will allow for very easy swapping of the key caps with an aftermarket set. The excellent build quality is apparent throughout during our initial inspection, with the Armato offering little give when we grabbed the unit at the edges and twisted. The Armato offered minimal flex when typing, with a solid flexplate implementation being apparent. The Armato has a natural upward tilt along the base of the unit, gradually raising up towards the rear in a smooth, natural line. This is a very attractive keyboard and we think it will appeal to more than just the gaming crowd.

Azio includes a decently comfortable wrist wrest that attaches to the bottom of the Armato via magnets. The wrist wrest works well as far as comfort and durability are concerned, but it didn’t hold to the keyboard as nicely as we would have liked, as it came loose when moving the keyboard. There was also a very small gap on the right side of the wrist rest, between the keyboard. These are minor issues, but things we felt we should point out, as the wrist rest is an important feature and something the user may interact with at all times. Also, the wrist rest works well, but the material is a hard plastic and won’t provide the long term comfort of a gel or foam wrist rest. 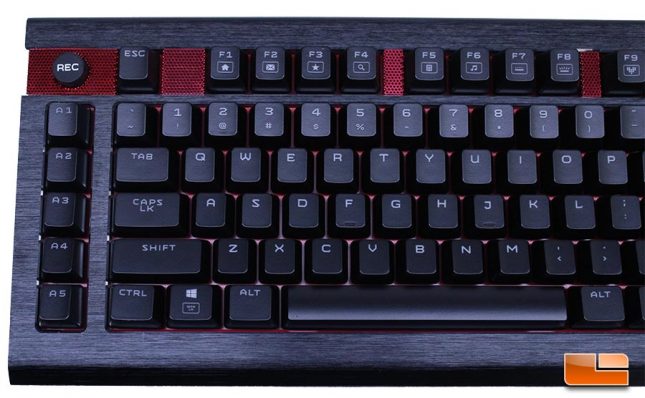 Lining the row of F-Keys and the Macro record button is a red aluminum mesh, similar to what you’d find on a speaker grille. This mesh lining extends around to the side of the keyboard and there is also a mesh strip on the opposite side of the keyboard. This mesh implemented nicely and fits the keyboard very well, giving it a stylish look that should allow the Armato to fit well in most gaming desktop settings. 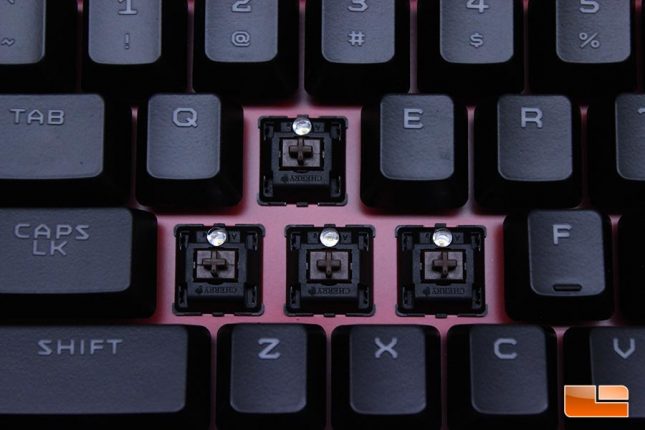 The switches on the Armato sit on a red plate, with the aluminum top plate coming out a little bit above the edges of the keys. All of the switches are stable and the shift keys and spacebar have minimal wobble, which lends to a consistent typing experience.

The key caps used on the Azio Armato are ABS plastic, with the graphics printed directly on the switch. Azio’s use of standard ABT printed keycaps is totally acceptable, but these caps won’t be as long-lasting as ABS doubleshot or PBT key caps. 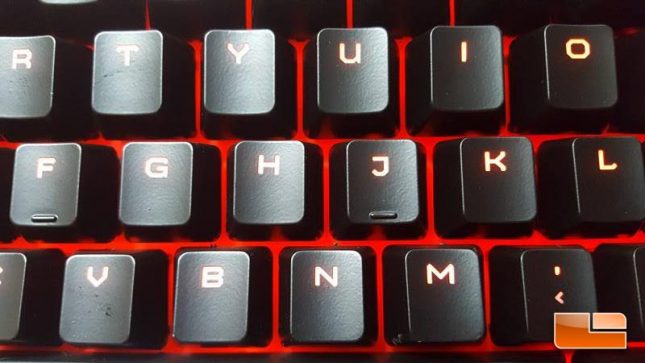 Azio has gone with a red backplate on the Armato. This really lends well to the red-lighting scheme and gives the keyboard that crimson look that Azio was aiming for, even when the LED lighting has been disabled. By the way, the LED modes here are pretty basic, with a reactive, fade and full-time mode available. The fade mode was somewhat uneven and a bit of a skipping when fading out and in, while the full-time LED lighting looked very consitent. 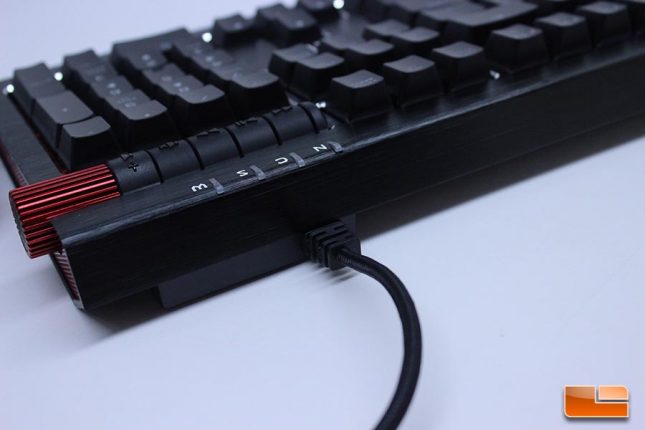 The USB 2.0 cable comes out of the top right of the Armato. The placement and thickness of the cable aren’t optimal, as the cable being on the right may cause it to interfere with certain setups, though we don’t think it will be an issue for a majority of people. A removable cable would have been optimal, of course, but that is not something we see on very many gaming keyboards. A thinner center-mount cable would allow the user to orient the cable in the best direction with a minimal of interference with other components, though. There is no USB pass-thru connection or other pass-thru functionality provided by the Armato, so the thick, non-removable cable is merely an aesthetic choice. 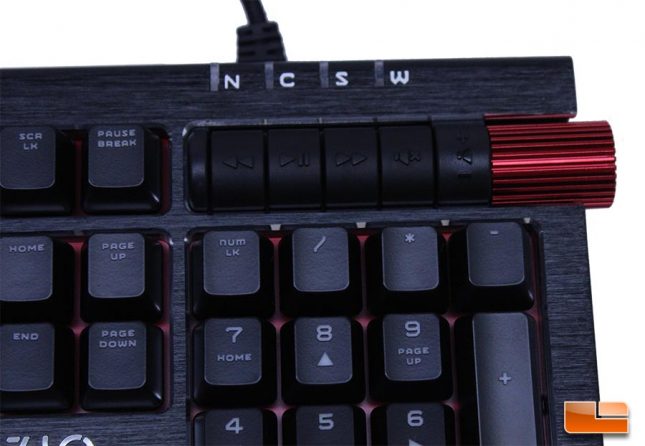 The red aluminum volume knob on the Armato works very well and offers a satisfying click as it is adjusted. This is one of the more high quality volume controls that we’ve seen on a keyboard.

The Armato offers a very clean aesthetic appeal, solid feature set and excellent build quality. A lack of software to control the lighting and macro functionality are both a blessing and curse, but overall the Armato is going to work well for gamers and casual PC users, alike. Besides a few of the small issues we noted regarding the USB cable placement and wrist rest not attaching as securely as we would have liked, the Armato is an absolutely top notch product.