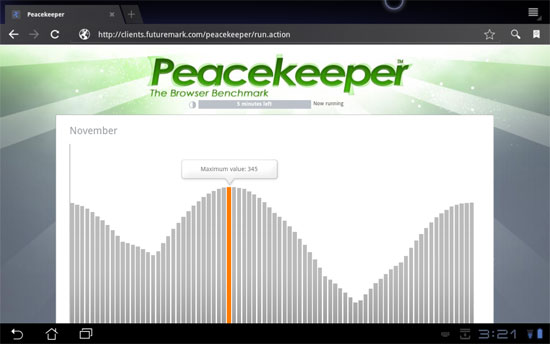 Peacekeeper is a new online benchmark from Futuremark that realistically simulates the load placed on the browser by common JavaScript functions as used by popular, modern websites. For users who prioritize speed and performance, Peacekeeper helps answer the question of which browser or tablet is the best for them. 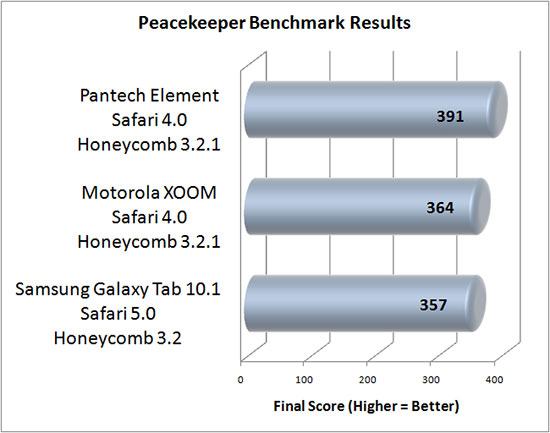 We tested the Motorola Xoom, Samsung Galaxy Tab 10.1 and Pantech Element with the standard Safari browser that comes with each respective tablet. Not all the browsers were the same version, so we expected a difference and we did see some. After running the benchmark five times and averaging the runs we found the Pantech Element to be slightly faster for web browsing out of these three tablets. 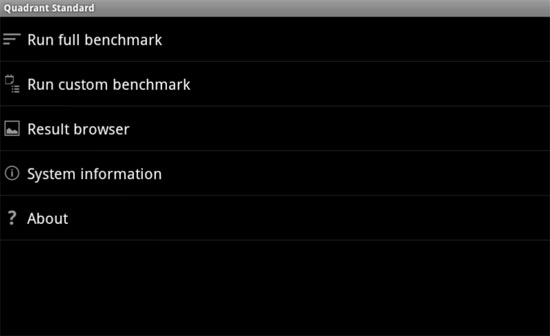 Quadrant is a CPU, I/O and 3D graphics benchmark. The Standard Edition requires an Internet connection to compute benchmark results and is supported by ads, but that should be fine for most users. We used version v2.0 for benchmarking the tablets. 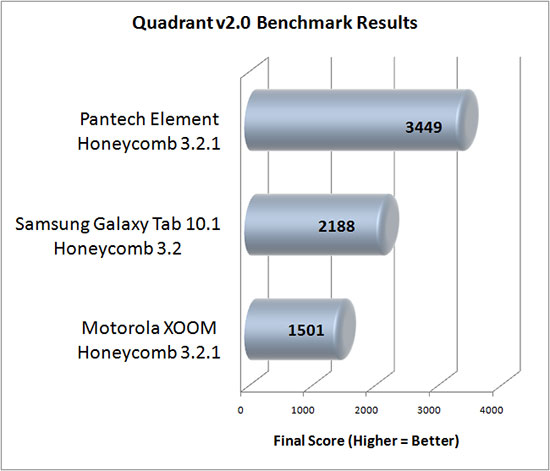 We ran the Quadrant benchmark five times and averaged the benchmark scores to get the numbers you see in the chart above. Quadrant showed that the Samsung Galaxy Tab 10.1 did very well on this benchmark. All of the tablets tested use a screen resolutions of 1280×800, so the benchmarks we are using shouldn’t vary due to the video benchmarks. The Samsung Galaxy Tab uses Android 3.1, so that might be the difference here.

The LINPACK Benchmarks are a measure of a system’s floating point computing power. Introduced by Jack Dongarra, they measure how fast a computer solves a dense N by N system of linear equations Ax = b, which is a common task in engineering. The solution is obtained by Gaussian elimination with partial pivoting, with 2/3*N3 + 2*N2 floating point operations. The result is reported in Millions of FLoating-point Operations Per Second (MFLOP/s, sometimes simply called FLOPS). This test is more a reflection of the state of the Android Dalvik Virtual Machine than of the floating point performance of the underlying processor. Software written for an Android device is written using Java code that the Dalvik VM interprets at run time. We used version 1.2.8 for benchmarking the tablets. 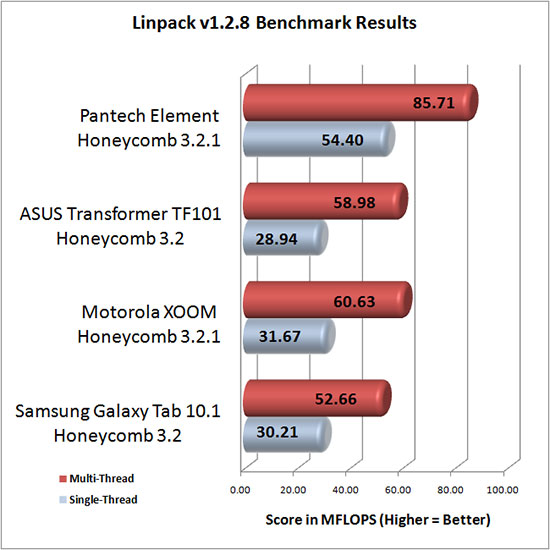 The Pantech Element did great on LinPack v1.2.8 for Android and was easily able to beat other big name tablets like the ASUS Transformer TF101, Motorola Xoom and the Samsung Galaxy Tab 10.1 by a fair amount! 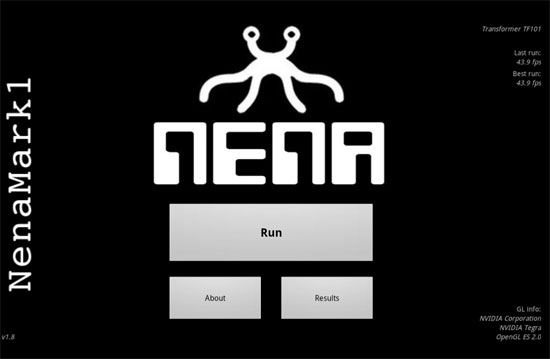 NenaMark is a benchmark of OpenGL ES 2.0, using programmable shaders for graphical effects such as reflections, dynamic shadows, parametric surfaces, particles and different light models to push the GPU to its limits. It can be downloaded from the Android Market or nena.se. We used NenaMark version 2.2 for benchmarking the tablets. 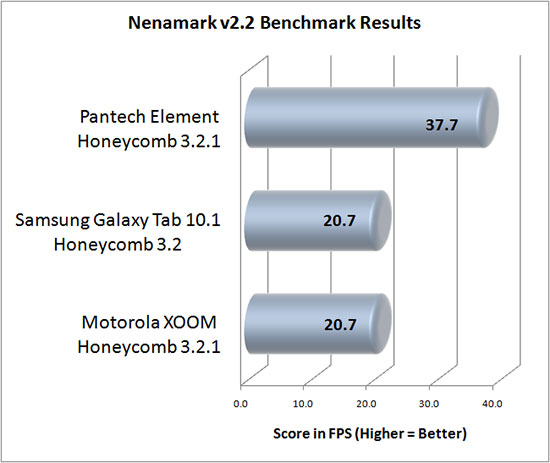 When it comes to this popular OpenGL ES 2.0 it should be noted that the Samsung Galaxy Tab 10.1 and the Motorola Xoom both have a 1280×800 screen resolution and run the same NVIDIA Tegra 2 processor. The Pantech Element runs a smaller 1024×768 screen resolution and uses the dual-core 1.5GHz Qualcomm APQ8060 processor. As you can see, the Pantech Element is much faster in this benchmark!