Inside the Zenbook UX31A

We wanted to see what ASUS did inside this Ultrabook, so we flipped it over and removed the 10 Torx T5 screws and opened it up. Keep an eye out where the screws go as two of them are longer than the rest and need to go back to the right spots. With the screws removed you can just remove the cover off the back of the ASUS UX31A and you’ll have access to the inside of the ultrabook. 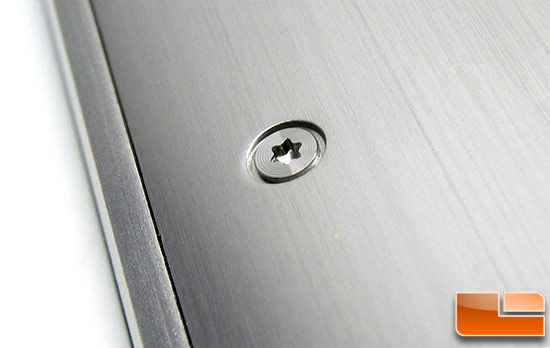 Most people don’t have a screwdriver that will work with Torx T5 screws, which means most people won’t be able to open up the ASUS Zenbook without buying a new screwdriver. You can buy a Torx #5 screwdriver online for $1.99 plus shipping or at a local hardware store like Sears for $3.99. Obviously, ASUS was trying to make it difficult for the average person to get inside, but not impossible. 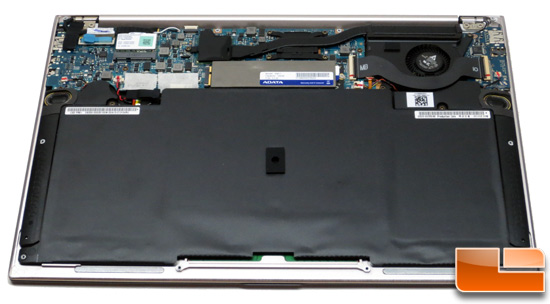 As you can see the majority of the inside of the ultrabook is consumed by the Li-Polymer Battery Pack, which is the big black vinyl thing in the image above. The motherboard itself is very small and runs across just the top of the of the ultrabook. Just above the battery you can make out the Solid-State Drive (SSD) and to both sides are the audio speakers. 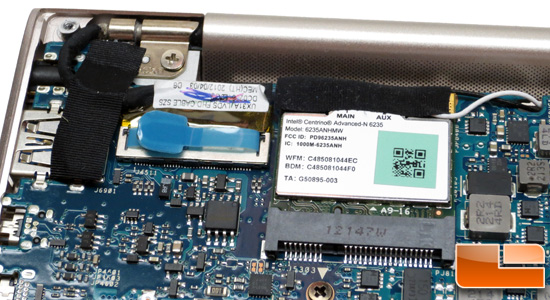 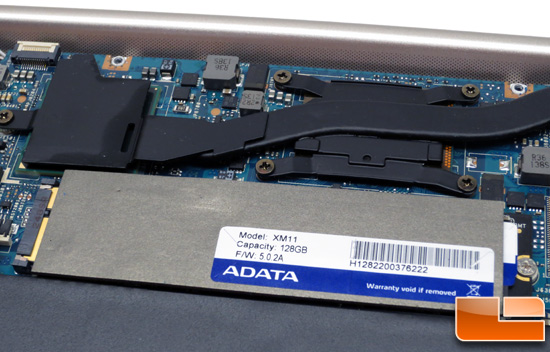 Our ASUS UX31A Zenbook Prime came with a 128GB SSD and with the back cover removed we can see that it is made by A-Data and has part number XM11. Directly above the SSD you’ll find the Intel Core i5 3317U processor and to the left of that is the Intel HM76 chipset that are both covered by what looks to be a heatpipe cooler. The Intel Core i5-3317U is a 22nm dual-core processor with 3MB of L3 Cache that runs at 1.7GHz. It does have HyperThreading enabled, so you have four threads available for use. The processor includes Intel HD 4000 graphics, so you can do some light gaming and easily watch HD content.

At first glance the CPU and chipset appear to be covered by a copper heat pipe that has been powder coated black, but the heat pipes goes over the CPU and stops just short of the chipset as it switches over to a thin piece of metal. That heat pipe goes over to a small array of cooling fins that has a fan blowing across them to cool them down as needed.  The fan doesn’t run all the time, but when it does you can hear it in a quiet room. 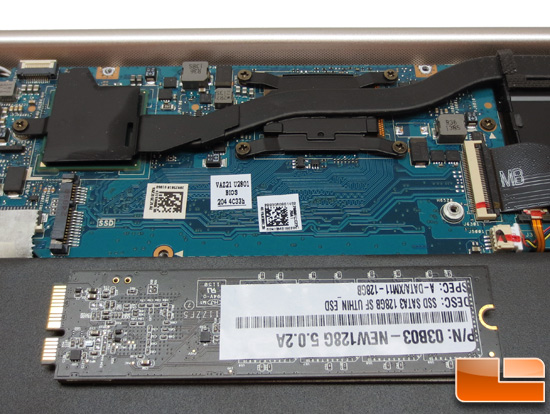 We removed the A-DATA XM11 128GB SSD and found that their are no MLC NAND Flash chips on the back, which means the four chips on the front are it. Each of these are obviously 32GB, which adds up to the 128GB capacity of the SSD.  The SATA socket used on the ASUS Zenbook Prime is smaller than the standard mSATA socket, so good luck on find consumer options if you want to upgrade capacity down the road.  ASUS uses both the ADATA XM11 (SandForce SF-2281) and SanDisk U100 SSDs in these notebooks. Since OEM notebook designs can change at any time there is no way to know what SSD you will be getting for certain.  This might be an issue to enthusiasts that want a specific drive, but when you buy an external storage drive or a notebook you never know what exact model you’ll be getting. 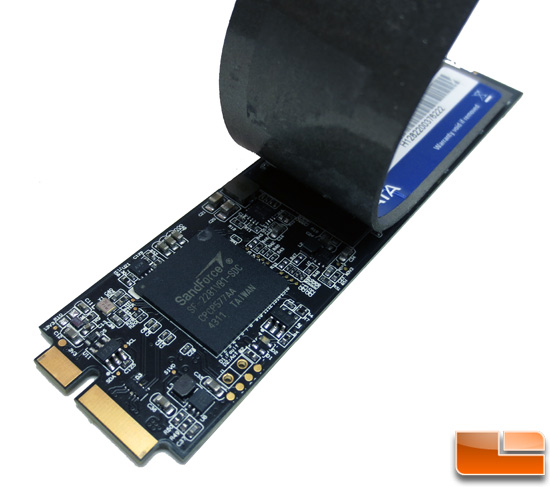 Taking a closer look at the SSD, we see that it uses an LSI SandForce SF-2281 SATA III controller that has the following markings: 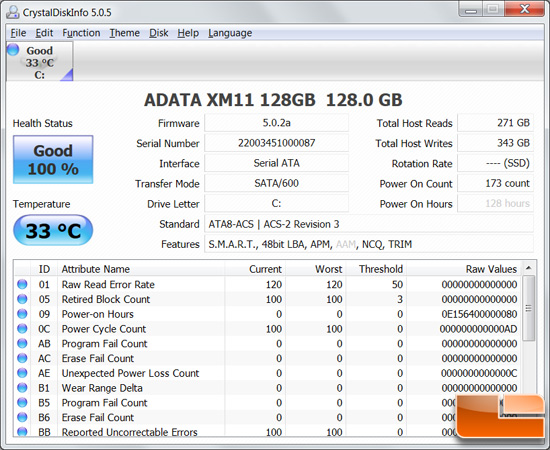 Taking a closer look at the SSD information with CrystalDiskInfo v5.0.5 we see that the SSD supports TRIM functionality, which will help keep drive performance pristine.

The ASUS Li-Polymer Battery Pack that comes with the Zenbook Prime UX31A has part number C22-UX31 and is rated at +7.4V, 6840mAh or 50Wh. We did a quick Google search and found generic batteries run around $83.16 plus shipping, so it is possible to get extra batteries if you wanted to get a T5 screwdriver and be able to swap out or replace a battery pack down the road.

Taking the C22-UX31 Li-Polymer Battery Pack out we flipped it over so you can see the other side and the connector it uses to attach to the motherboard. 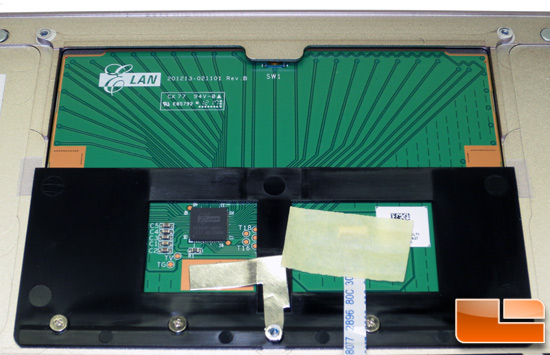 ASUS uses an ELAN trackpad on the Zenbook Prime and the ELAN touchpad controller is labeled 33200V-3600. The UX31E and UX31A both share the same touchpad. 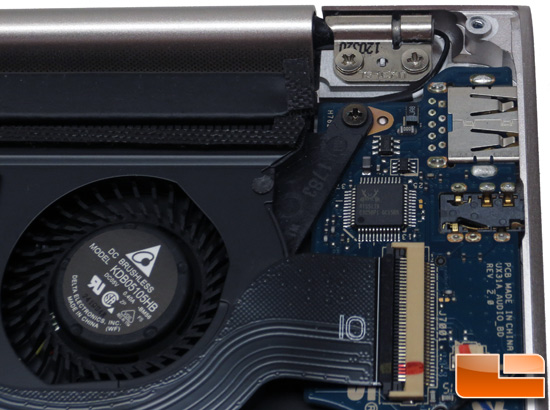 The first controller we saw on the back of the motherboard is the
Realtek RTS5139. This controls the USB card reader on ASUS Zenbook.

On the other side of the motherboard you’ll find more components like the integrated DDR3 memory, but we didn’t want to pull the board all the way out as we mainly just wanted to show you what is under the cover and inside an ultrabook!