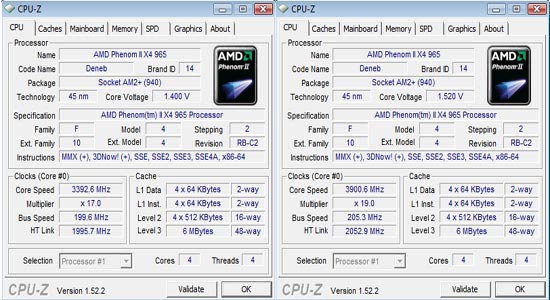 With a BIOS made for overclocking and AMD’s awesome OverDrive at our disposal we were able to squeeze an extra 500mhz out of our Phenom II X4 965.  Even with bare MOSFETS we had no trouble cranking up the voltage to 1.52v.  While I would not recommend running your system constantly at this voltage it’s a testament to the board’s design that it was able to cope with such high voltage with no cooling whatsoever while running everything we threw at it.  While writing this article I stumbled across This Verified Overclock, an Overclocker by the name of Luca was able to overclock a Phenom II X4 965 to over 6GHz using LN2.  What board was he using? It was not a $300 board with LED’s all over it.  It was the ASRock M3A785GXH/128M.

Unfortunately, GPUZ does not yet work properly with this board.  We were, however, able to get a rock steady 1GHz clock out of the Radeon HD 4200.  Below are some benchmarks comparing the HD 4200 to an 8800 GTS 640mb.

For our first test we decided to run the brand new Street Fighter 4 benchmark by Capcom.  For the test we ran everything at its default settings and the screen resolution was set to 1280×720, or 720p.  As you can see the extra 500MHz makes quite an impact. With lower settings Street Fighter 4, a recent game with some impressive graphics, is definitely playable.  That in itself is impressive for an IGP.

Even though the Radeon HD 4200 supports Shader Model 4.0 and Direct X 10.1 it was trounced by the 8800 GTS.  This is not surprising because even though the Radeon is impressive for an IGP, it just does not have the horsepower to overthrow an 8800.  The Radeon’s 40 stream processors just do not match up well to the 8800’s 96 stream processors.  This coupled with a serious memory speed deficit means that even for its strengths the Radeon is fighting an uphill battle.

Our FarCry 2 tests were surprising to say the least.  The test was run with all settings set to default at a resolution of 1280×720.  Doubling the clock of the Radeon offered us 10 additional frames per second in FarCry 2!  This left it at a playable 34 frames per second!  So what we end up with is an IGP that can run new games like Street Fighter 4 and FarCry 2 at playable frame rates.

In Geekbench the board scored a respectable 6141 points.  This is 359 points HIGHER than the ASUS Crosshair III Formula.  It becomes clear, however, that this is in large part due to the Phenom II 965 we used for this review as opposed to the Phenom II 955 used to review the ASUS board.  Although our integer and floating point scores are higher, the ASRock M3A785GXH/128M falls slightly behind the ASUS board in memory and stream performance which is quite nice considering the ASRock costs $99 dollars compared to the $200 ASUS board.

SiSoftware’s Sandra gives us a clearer picture into the memory performance of the ASRock  M3A785GXH/128M.  Here we see that although it does not perform up to 790FX standards it does have higher integer and floating point memory bandwidth than the 790GX.