The Antec AMP SP1 Bluetooth Speaker is an interesting product that can be picked up for $77.87 shipped. For the price you pay and the size of the speaker, it sounds pretty darn good. When you are outside hanging out with friends at a gathering it is more than good enough. Antec has managed to come up with a competitive product the first time trying, which is crucial in a Bluetooth speaker market that is packed full of competing products. 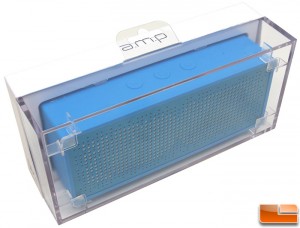 Antec is said to be making an AMP SP1+ or SP1 Plus Bluetooth Speaker that will add NFC-enabled Bluetooth pairing, as well as CSR’s TrueWireless Stereo technology that will let you use one SP1+ as the left channel, and then another SP1+ as the right channel. No other changes have been announced or leaked out. The Antec SP1+ is due out in October or November.

We can only hope that the second generation speaker will continue to build on the strong points and eliminate the weak ones. For example we’d love to see a wall charger included. You could also ditch the 3.5mm auxillary input and included 3.5mm cable as most won’t be using that feature and it will reduce costs. It would also be nice to set the device volume to the max by default so it can be fully controlled by your smartphone or tablet.A battery level meter would be nice too! The last change we’d make is to remove the microphone and make this just a speaker. When having a party or an afternoon on the beach, the last thing you want is the music to shut off when people call you to tell you they are running late. This is a speaker right? 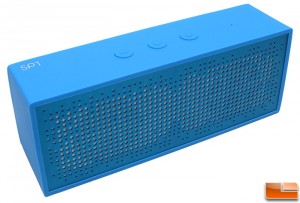 If you are looking for a budget friendly Bluetooth wireless speaker that is compact, rechargeable and affordable with good sound quality, be sure to give the AMP SP1 a consideration.  This is a product that we will recommend as you’ll have a hard time finding a product for $77.87 shipped that sounds as good with all these features. The new AMP SP1+ will be coming out later this fall, but it looks like a minor refresh that will only apply to those with NFC supported devices and those wanting to buy two for true stereo surround.

Legit Bottom Line:  The AMP SP1 Bluetooth Speaker goes to shows that Antec can make more than just computer components and do it well!