Let’s take a look at the Windows Experience Index score as that is
one that you can easily compare to other notebooks at retail stores.

As you can see our system had a Windows 7 Index base score of 5.9 and
the lowest scoring component on the notebook was being the memory. This is a big improvement from the last AMD APU (Llano) as it had a base score of 5.7 and was limited by the graphics. We went from a subscore of 5.7 to 6.7 on the graphics!

To test out the performance of the new AMD Trinity series of APU’s we’ll be running a series of benchmarks and then comparing it to a couple other notebooks.  The notebooks that we have for testing are the Compal PCL10 with an AMD A8-3500M APU and the ASUS K56VM notebook with an Intel Core-i7 3720QM processor. You can see the details on each system below. 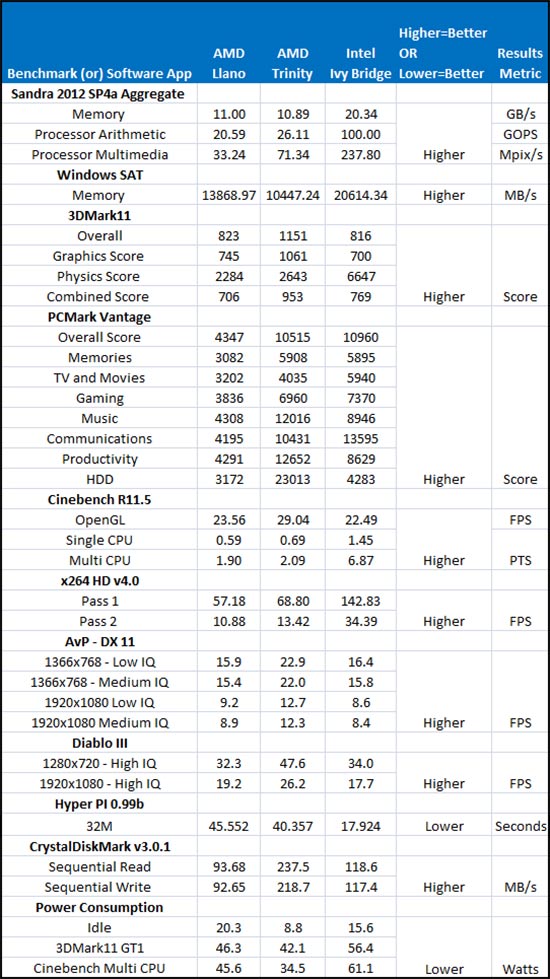 Just like we expected the AMD Trinity APU performed exceptionally well on the 3D benchmarks we used and was slower on the x86 CPU side of things. The overall responsiveness of the AMD Trinity whitebook that was sent to us was impressive, but it was also the only notebook in the bunch that was running an SSD. If you look at the CrystalDiskMark storage drive tests, you’ll see that the AMD Trinity systems storage drive was nearly twice as fast as the others solutions.

One of the things that stood out to us was the poor memory performance on Trinity system. The Trinity notebook uses DDR3 memory that is clocked at 1600MHz (effective) with 11-11-12-28 timings and Sandra 2012 SP4a showed a memory bandwidth score of 10.89 GB/s. The Llano notebook uses slower DDR3 1333MHz (effective) memory with 9-9-9-28 timings and was able to score 11.00 GB/s in the same benchmark. We aren’t impressed by the memory controller performance on Trinity.

When you look at the CPU intensive benchmarks like Cinebench or Hyper Pi we see that Intel clearly still leads with the Ivy Brige processors, but AMD did make some performance gains with the new core architecture and additional clock speed. The Sandra Processor Multimedia test shows that performance has more than doubled since LLano!

When it comes to graphics performance, it is clear that this is the sweet spot for AMD APU’s. Intel Ivy Bridge processors with Intel HD 4000 graphics might have managed to catch up to Llano APU’s with the Radeon HD 6000 series GPU’s, but not Trinity. Trinity APU’s with the Radeon HD 7000 GPU cores handles games really well. We were able to play Diablo III with high settings at 1920×1080 just fine on the A10-4600M APU!  Even high-end DX11 game titles like AvP are nearly playable now without the need of discrete graphics.

Power consumption was something that really shocked us with Trinity. AMD said that this platform would be very power efficient and they weren’t lying. With the notebooks at idle in balanced power mode, we found a big difference in power draw. The AMD Trinity whitebook was seen idling at 8.8 Watts, which is way less than the Llano and Ivy Bridge notebooks.  Even at load the power numbers were insanely low again. The Trinity notebook uses nearly half the power and idle and load compared to the Intel Core i7-3720QM ‘ Ivy Bridge’ processor that we compared it against!

We are just showing you these numbers so you can put the pieces together on your own. You can download 3DMark, CrystalDiskMark, Sandra, Cinebench, x264 HD, Hyper Pi, and the AvP benchmark for free and see how your current laptop compares to these scores. We like using these tests as you can do them at home to see how your system stacks up against the new ones!