AMD launched a new pair of APUs this week that pair the Zen CPU and VEGA GPU micro architectures together to bring more value to the entry and mainstream desktop PC market. Those two new processors would be the AMD Ryzen 3 2200G and Ryzen 5 2400G. AMD went back to the drawing board for these two new processors and they only have a single CCX with four active cores. The original quad-core Ryzen processors had a 2+2 CCX configuration with some cores deactivated. This new single CCX design should improve the processors latency and reduce production costs. The bad news is that this design has reduced the L3 cache size down to 4MB from the previous designs that had 8MB. There is also a reduction in the number of PCIe lanes available on Raven Ridge as there are just 8 GPU PCIe lanes available to use versus 16 on all previous Ryzen desktop processors. AMD also implemented Precision Boost 2 technology on these two Raven Ridge processors to ensure you are at the highest possible clock frequency at all times. 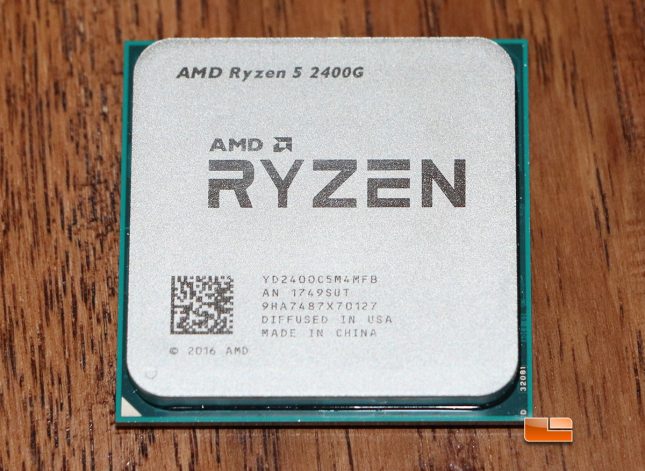 AMD Ryzen 5 2400G is a quad-core desktop processor with Simultaneous Multi-Threading (SMT), so it is a 4-core, 8-thread processor. This is the flagship model that has a 3.6GHz base clock and a 3.9GHz max boost clock that is topped off with Radeon Vega graphics that has 11 Compute Units (CUs) containing 704 stream processors. The AMD Ryzen 3 2200G is a 4-core, 4-thread processor running at 3.5GHz base and 3.7GHz boost that is topped off with 8 Vega CUs and 512 stream processors.

Both the AMD Ryzen 3 2200G and Ryzen 5 2400G processors come bundled with the AMD Wraith Stealth CPU cooler. Thermal paste is pre-applied to the bottom of the all aluminum base structure, so to install you just need to screw it down and plug in the 4-pin CPU fan header. The AMD Wraith Stealth is a no-frills HSF assembly that should easily be able to handle these 65W TDP processors.

Let’s quit the chit-chat and look at the performance results!