AIDA 2.6 was used to measure up our over clocking benchmark. The AMD Phenom II x4 810 with the Gigabyte 990FXA-UD7 results are below for our memory kit. The two screen shots below show our 1600Mhz and 1333Mhz results. 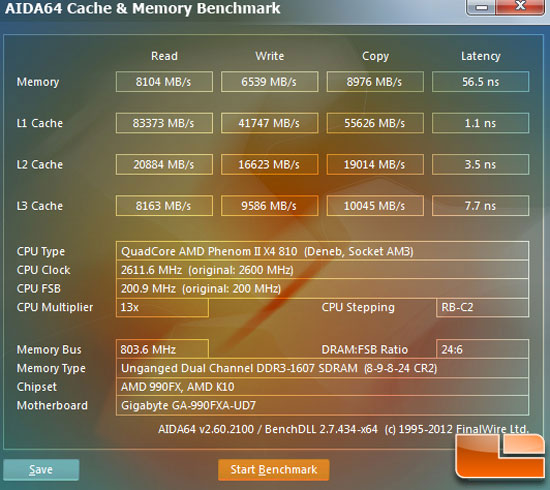 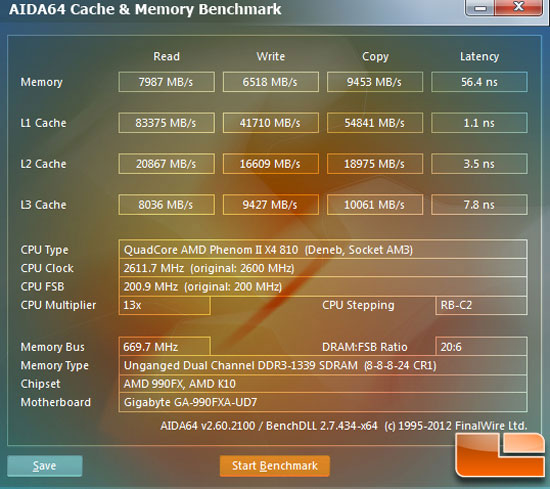 AIDA once again proving that the memory when set to 1333Mhz performs at a slightly slower pace than when configgure to 1600Mhz.

Much like all the other testing we have done the 1600Mhz 8-9-8-24 settings are slightly better than the 1333Mhz 8-8-8-24 default settings. If an uninformed builder was to use these memory modules there would not be much of a drop off in performance by using the default BIOS settings.

For the brave and more advanced builder the memory has some over clocking ability. I was able to increase the memory to 1720Mhz 10-10-10-10 1.69v. There were some stability problem with these settings under an air cooled system

AMD and their partnership with Patriot has created a solid dual-channel memory kit. With the speeds of 1600Mhz and clocking of 8-9-8-24 2 x 4GB performs quite well. Over clocking this memory with an air cooled system does not really seem to add much to performance and may even hinder it a bit with stability. A liquid cooling system should be able to push the timings the product. Right now 1600Mhz is the fastest memory on the market in this make and model. I would like AMD’s partnerships with memory manufacturers to make with higher speeds 1866, 2133, 2400, 2666, and 2800 MHz.

You also can not complain about the memory price. For sub $60 memory it’s quite a good value which you can find at Newegg.com. I would have like to have seen the default voltage to be a little lower as well. For the timings of 8-9-8-24 1.5v should have been enough and also leave more room for overclocking if desired which is set on the Performance Edition models at 1333MHz. 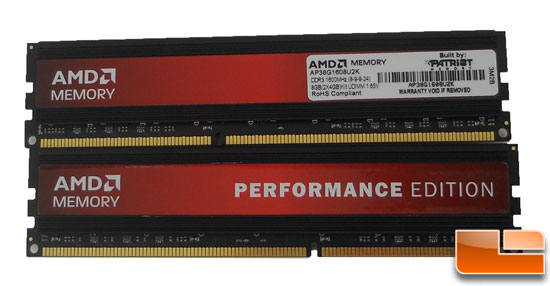