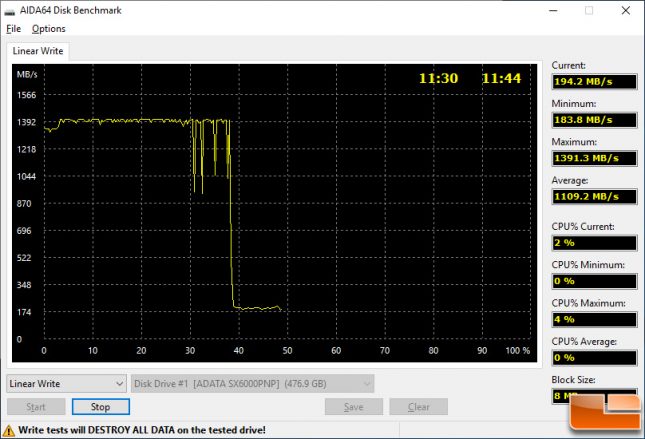 When you take a look at extended sustained write performance you’ll see that the performance started out at around 1400 MB/s and remained there until we wrote data to 30% of the drive. Once roughly 150GB of data was written to the drive we start to see performance spikes down to about 1 GB/s for a bit before the performance drops way off down to under 200 MB/s for the remainder of the run. The lowest write speed recorded was just over 183 MB/s. This low level of performance is what you’ll get after all the SLC cache was full and data is being written directly to the 3D TLC NAND Flash. Chances are this will seldom happen since we had to write over 200GB to the drive without any pauses or breaks to put this SSD in a state for this to occur.

The XPG SX6000 512GB drive finished our file transfer test at 1414.923 MB/s, which came as a complete shock as this entry-level drive was able to out-perform a good number of popular SSDs that have come out in recent years.