While the ADATA HD710A is marketed towards Mac users, it really can be used on a Mac or Windows platform. It just needs to be formatted accordingly. As such, other than the color scheme and the packaging, the HD710A isn’t really any different from the HD710. While we haven’t tested the latter, we expect that we’d find the same performance numbers and looking at some of the results from tests run by other sites, it appears our supposition is correct. Overall performance is as we would expect from a HDD, regardless of the bandwidth of the interface – USB 3.0 in this case. Reads and writes made it just over the century mark which is indicative of a 5400RPM HDD. We didn’t crack open the drive to check since it’s permanently encased in silicone but a little research shows it is indeed a 5400RPM HDD. Having the USB 3.0 interface definitely prevents a bottleneck but leaves tons unused bandwidth. An enclosed SSD would definitely speed things up but would also jack up the price and reduce available capacity so there are trade-offs. 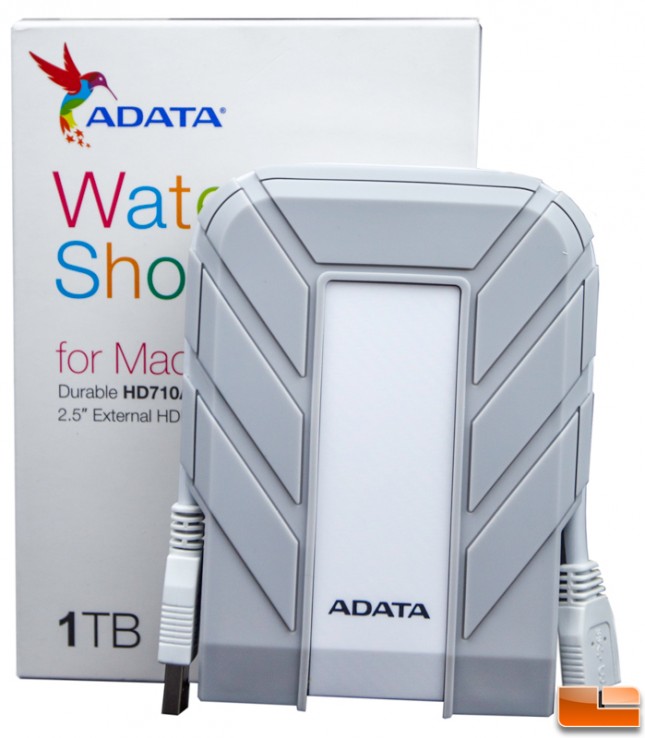 One thing that was disappointing on the HD710A model is that the free software HDDtoGO and OStoGo that ADATA offers through their site for use with the drive is only available for Windows. As such, Mac users miss out on this perk which does add a fair bit of functionality. Of course, the drive could be used on a Windows machine which would make these usable but since this is specifically marketed to Mac users, the majority of buyers will be on Mac OS. Without the software, the drive is simply a repository for your files without any extra functionality that the software would provide. However, it does support Time Machine so makes a good target for backups and that is a big function for which many buyers will be utilizing the external storage.

While we didn’t go so far as to submerge the drive in water to test its watertight properties, we did spend some time fiddling with the USB port cover that never really inspires confidence that it’s seated properly. Per ADATA, this needs to be in place for the drive to remain waterproof and dustproof. There’s no real tactile feedback that the cover is firmly in place and it takes very little force to dislodge it, making any situation where water is involved a bit precarious. While it probably works just fine, I’d be wary of anything above and beyond a mild splash. The cover should work adequately for dust as well but again if the drive were to be jostled about in a bag, I’d be concerned about this cover coming loose enough for dirt and dust to enter the port. This is probably our biggest complaint about the drive design and it’s probably not an even an issue but it’s worth mentioning. How many people reasonably expect their drives to become submerged anyway? Otherwise, the drive works as expected and is set up nicely to be a durable portable drive. The cable stay around the drive perimeter is a nice touch and the color scheme allows it to blend right in with the Mac ecosystem.

The ADATA HD710A is just starting to hit the street this month and Amazon is charging $99.99 shipped for the 2TB version. The 1TB version isn’t listed yet, but we’d expect it to be around $69-79 when it becomes available later this month. Both drives are covered by a 3-year warranty.

Legit Bottom Line: If you’re a Mac user and need a rugged portable USB 3.0 drive that can survive abuse from physical shock, dust, and water, the ADATA HD710A should meet your needs nicely though there is not Mac compatible software suite to accompany it.