Every year, when families get together one of the issues with showing family pictures is that everybody has to pass devices around, or gather close together to look at each device.  The Actiontec ScreenBeam Mini2 alleviates this issue for Windows 8.1 and Android users.  With it connected to any HDMI Television or computer screen, you can wirelessly stream any audio or video from the device to the big screen.

The only issue that was encountered was some minor screen clipping on each device.  For Windows 8.1 devices, the Actiontec ScreenBeam Mini2 configuration utility has a way to resolve this, which would be a nice feature to have on the Android utility.  Otherwise, connecting to the ScreenBeam Mini2 was simple enough that once I told a friend that screen mirroring was enabled on the TV, they were able to connect to the device within seconds and we were able to see everything on the big screen. 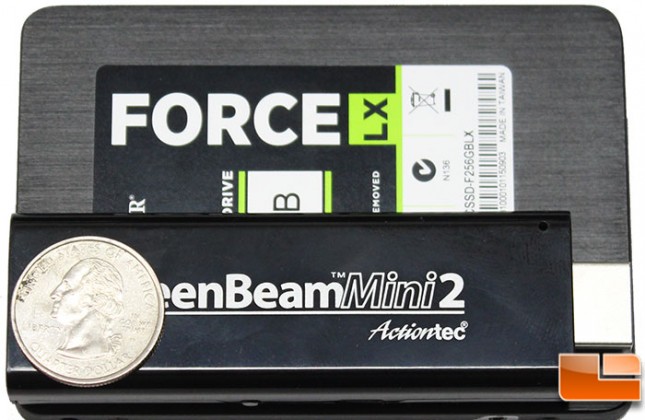 The ScreenBeam Mini2 is fairly small measuring 3.8″ x 1.2″ x 0.5″ (L x W x H), placing it on a Corsair Force LX SSD, it is pretty much the exact length of the SSD.  With a standard US Quarter on it, we can see that it is slightly wider the quarter.  Depending on the display device, this could cause some issues if the ScreenBeam Mini2 will stick straight out the back and could run into the wall, which is why they include the HDMI extension cable.  Thankfully, on the LG TV there is an HDMI connection on the side so this was not encountered and the HDMI extension cable wasn’t necessary.

Legit Bottom Line:  There are many ways to present data to a TV or computer monitor, most require the use of cables.  The ScreenBeam Mini 2 allows a wireless connection to the display and does it easy.  When you have a family gatherings and want to show off recent pictures or videos on your Android device, you no longer have to pass the device around, use the ScreenBeam Mini 2 and everybody can see the pictures at the same time.