We decided to overclock the memory on our Intel test system, since it was found to be more stable. Also the ABIT IT7-MAX2 V2 allows you to control the DRAM Ratio H/W Strap. Which puts you, the user, in charge of the speed at which the DRAM runs at by controlling the FSB that the DRAM thinks the system is using. It also affects the DRAM ratios available within the DRAM Ratio (CPU:DRAM) setting. For this review, we used the 3:4 (CPU:DRAM) setting. Also, it should be noted that we used 2.8v on the modules. The results suprised me!

Yup, you are seeing that correctly! The Kingston HyperX PC-3500 blew by the Corsair XMS PC-3500! The HyperX memory was running stable at 464Mhz!!! 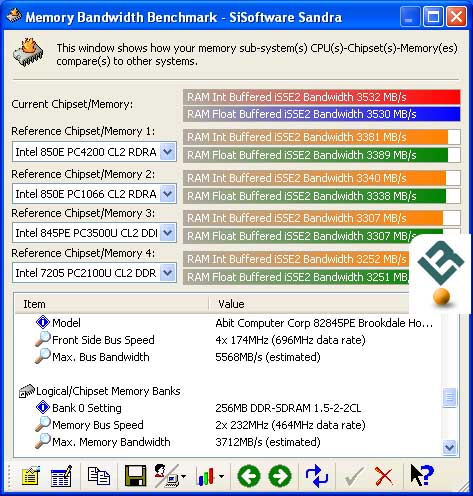 The Kingston memory module comes in at a very close second in performance behind our Corsair XMS PC-3500 in all tests. Only when overclocked past its rated speeds is where the Kingston HyperX is able to step out in front of the Corsair module and really shine. This memory is indeed very overclockable on the right system. If anything, from this review I hope you learned two things, the first being that a stable system is a must for overclocking this high, and the second being that this ram has amazing overclocking potential.

From our testing, we showed that the strong point of this memory was observed while overclocked, where it received better Sisoft Sandra scores over the Corsair XMS PC-3500. If you plan on running DDR 333 or DDR 400 the HyperX PC-3500 performs just a tad under the almighty Corsair XMS PC-3500, although when put to the extreme in overclocking it is able to pass up the competition in this review!

The Kingston HyperX line of memory shows great potential and is something to keep an eye on in the future.