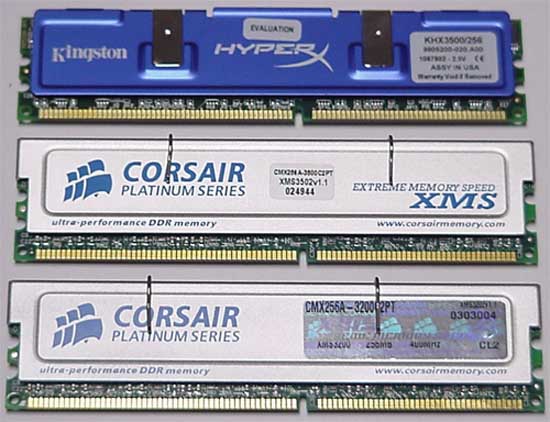 All testing was done on a fresh install of Windows XP Professional build 2600. The tests were done on the desktop with no other software programs running. We ran the Athlon 2100+ at the FSB needed to give us the correct memory timings. During this review, the room temperature was 26 degrees Celsius, while the case temperature was 31 degrees Celsius.

Sandra is designed to test the theoretical power of a complete system and individual components. The numbers taken though are purely theoretical and may not represent real world performance. Higher numbers represent better performance.

On our two final tests, we decided to run all three modules at DDR400 speeds at the most aggressive settings available on our ABIT KD7 motherboard.

Results: The leader on both tests was the Corsair XMS3500. It was not ahead by that much, but 46 points on 3dmark is a noticeable difference.

Results: On the Intel system, DRAM voltage was set to 2.8, and we ran DDR 434 at the advertised Kingston HyperX timings (2-3-3-7-1T). We found that at anything below 2.8v we were not able to get the memory to load Windows XP. The above chart shows that the HyperX ties with Corsair on the Float, but Corsair takes a small three point lead on the Integer bandwidth usage at PC-3500 speeds.

Now that I have seen the results, we will look at overclocking and sum up my overall impression of our Kingston HyperX module!