Installation was very straight forward. It was very easy to mount the water block onto the Ryzen 9 3900X CPU with the provided accessories. The tubes were also very flexible and did not show signs of kinking in tight angles. Because of the extra cables for the RGB components, I took extra time and effort to manage those cables. Once everything was installed and tidied up, it was time for some testing. 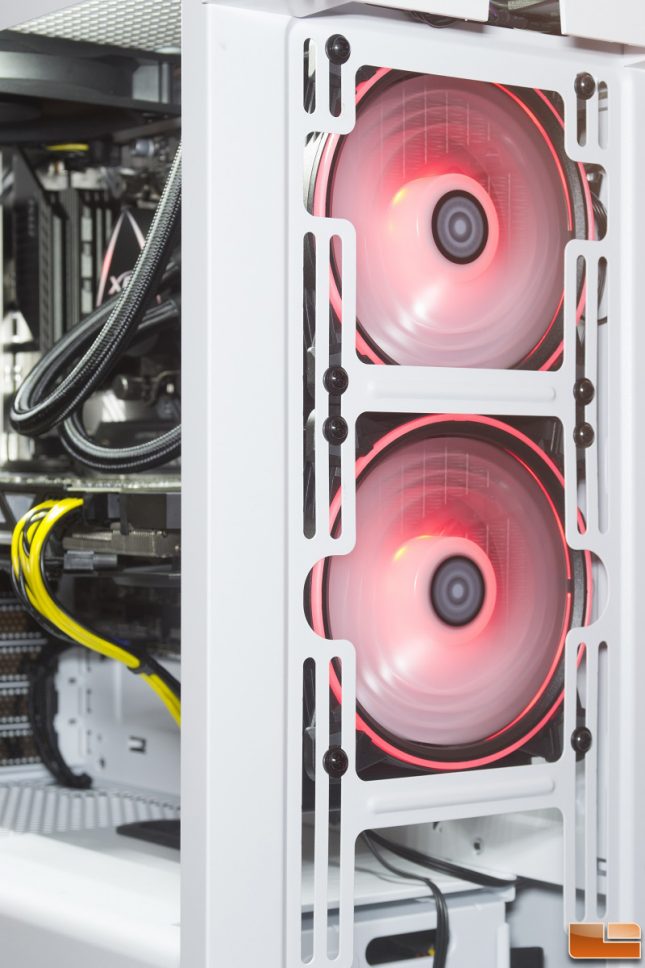 As for the testing methodology, the AMD Ryzen 9 3900X was overclocked to 4.2GHz on all cores. Voltage setting was set to 1.3v with the radiator mounted at the front of the case. The case of choice was the Corsair iCUE 4000X RGB with the side and front panels closed off. There were three Corsair SP RGB ELITE 120mm fans for exhaust: one in the rear, and two at the top. This was to simulate a real-world scenario on how the cooler will perform in a typical gaming setup. Results may vary depending on the computer case and fan configurations.

The fans were attached directly to the MSI Bazooka B550M motherboard. The fan settings on the motherboard were set to run all fans in the case at 100% when the CPU temperature reaches 60°C, but lowers fan RPM to 25% during idle. Ambient room temperature was 20.5°C with AIDA64 running a 20-minute stress test on the CPU, FPU, and cache for maximum heat. Idle tests will also consist of a 20-minute run period sitting on the desktop. Let’s take a look at the benchmark results below. 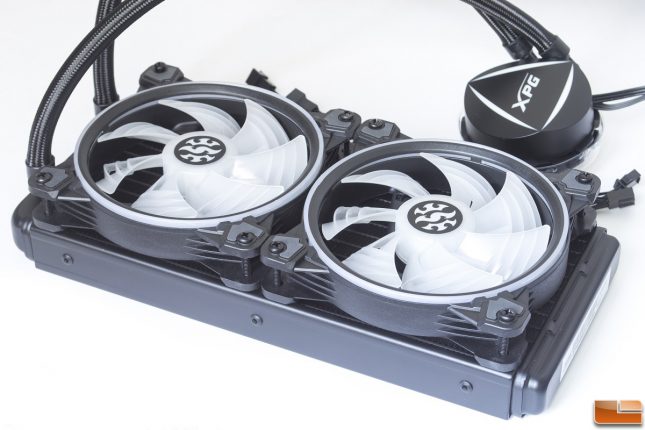 The performance of the Levante 240 was as expected. With an average fan speed of 2193 RPM at load, the load temperatures averaged out at 84.4°C after the 20-minute stress test. Compared to the Corsair H100i, the Levante 240 ran much quieter but at the cost of performance. The SP120 fans on the H100i was significantly louder at 2803 RPM averaged, which correlates to cooler temperatures overall.

Idle temperature on the Levante 240 was also warmer than the rest of the coolers in this test at 33.6°C. This was because the fans ran at a speed of 646 RPM averaged. It was warmer than the 120mm Cooler Master MasterLiquid Lite 120, but that was because it had an average fan speed of 931 RPM. 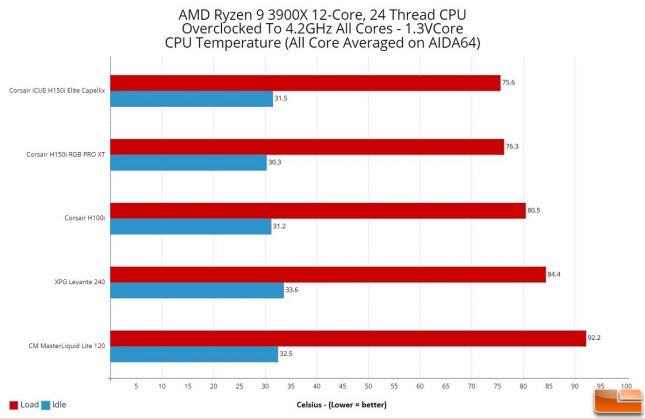 With the Asetek design, this meant the Levante 240 is compatible with the NZXT GPU brackets. The Gigabyte RX 5700 XT was not the coolest running card with its reference cooling solution, but using the Levante 240 as a dedicated cooling unit for this graphics card resulted in lower noise and improved temperatures overall. 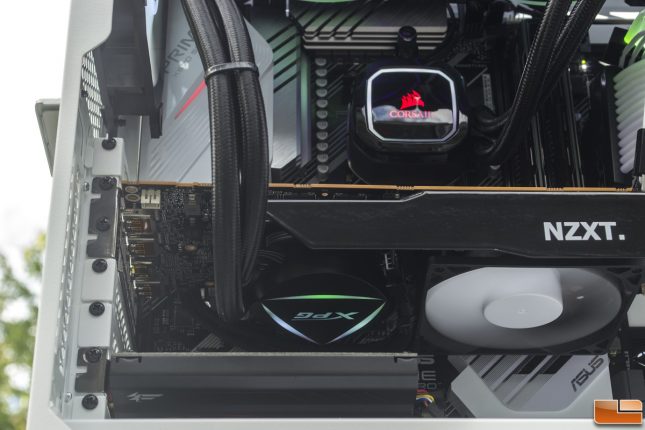 Graphics cards expel much more heat than CPUs. Because of this, I set the fans on the 240mm radiator at the top of the case in exhaust orientation. This lets the heat from the radiator expel out from the case without recirculating inside to the other components. It was amazing just how much heat was coming from the radiator when gaming as it was hot to the touch. At 49.4°C via infrared thermometer, this showed just how hot the radiator became when gaming. 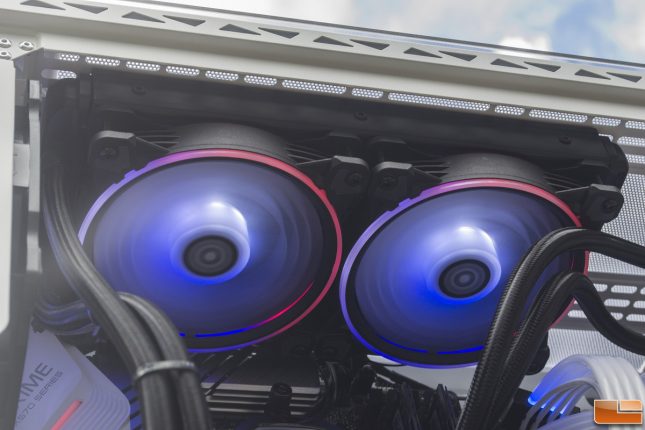 In terms of appearance, the only thing I would improve is the light diffusion on the pump head. It is easy to pinpoint where the LEDs are. At this price range, it makes sense to have better RGB illumination. But as for the fans, the rings and fan blades diffuse the light very evenly. 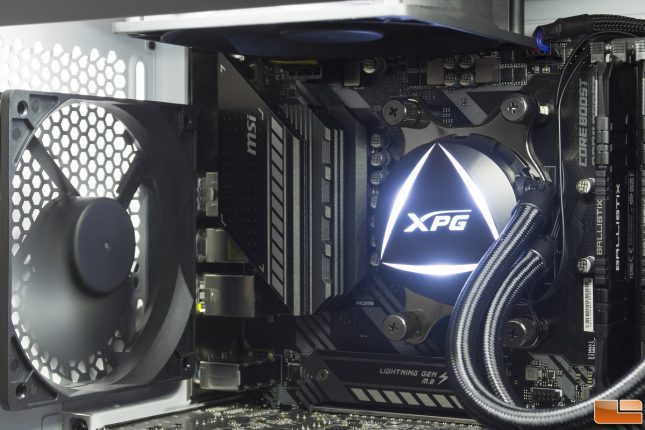 The Levante 240 does have potential for cooling high-end CPUs like the AMD Ryzen 9 3900X in this review. It does not have support for socket sTR4 or sTRX4 out of the box. But with its Asetek design, there are available adapters to purchase separately. When installed in an airflow focused case, there will be improvements in overall temperatures. The 120mm fans are not the fastest, but they are not obnoxiously loud at full speed. Although, I personally would not mind faster fans as this gives more flexibility for cooling.

Overall, the Levante 240 performs well and looks good with its RGB illumination. Priced at $139.99 shipped on Amazon, this liquid cooling unit is up there with some of the more expensive 240mm AIOs. It is also possible to get a 280mm AIO at this price range that offers better cooling performance. There is a premium price to pay for the addition to RGB lighting. But if pure performance is what you are after, the Levante 240 may not be the best choice. Something like the Arctic Liquid Freezer II 240mm AIO will make a much better choice at under $100 shipped.

With a five-year warranty, the XPG Levante 240 liquid CPU cooler is recommended with its balance between appearance and cooling performance.