AMD introduced the Polaris GPU architecture with the introduction of the Radeon RX 400 series in July 2016. They then ‘refined’ Polaris and launched the Radeon RX 500 series in April 2017. AMD must really like Polaris as here we are in November 2018 and they are bringing the AMD Radeon RX 590 to market with yet another ‘enhanced’ version of the chip. It looks like this might be the last time that we write about a brand new Polaris GPU coming to market though as it looks like they pulled out all the stops this time around to get every last ounce of performance that can be had from this GPU.

The big deal with Polaris this time around is that AMD yet have managed to move the Polaris architecture from 14nm FinFET down to the 12nm FinFET technology. This allowed AMD to get higher clock speeds out of Polaris and is the reason they were able to get that 12% performance boost. The base clock speed on the Radeon RX 590 is now 1469 MHz, which is up 16.8% over the Radeon RX 580 and an impressive 31.2% over the Radeon RX 480. The peak compute performance is up over 22% thanks to the higher clock speeds! It should be noted that AMD did not shrink the die size remains 232mm^2. Shrinking the die would have lengthened the time to market and would have been more complicated for the AIB partners to implement. While AMD has been working hard at spinning new Polaris GPUs they haven’t touched the memory. AMD is still using GDDR5 memory and all the 8GB models run at 8 Gbps with 256 GB/s of memory bandwidth.

The new Radeon RX 590 has a suggest retail price of $279 and is about 12% faster than the Radeon RX 580. AMD will not be offering a Radeon RX 590 reference design, so each add-in-board company will have their own custom board design to sell. AMD believes that the performance of the RX 590 will appeal to 1080p gamers and that is it priced right. Those in the United States might have to worry about tariffs though in the months ahead and AMD was unable to speculate about how future tariffs may or may not impact pricing. The goal for AMD is to have the Radeon RX 590 on store shelves at $279. 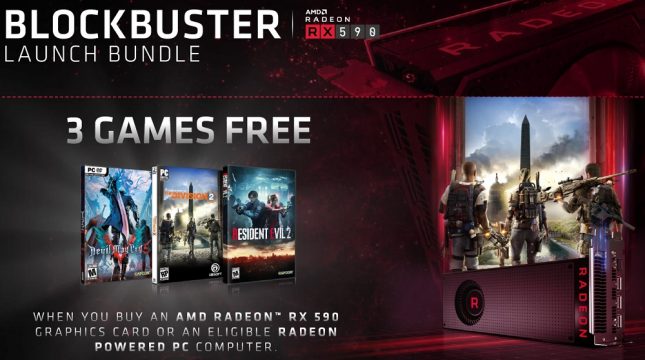 We should also point out that the AMD Radeon RX 590 is launching with a game bundle. The blockbuster launch bundle as AMD calls it comes with three ‘free’ game titles. Those titles are Devil May Cry 5, The Division 2, and Resident Evil 2. If you were planning on buying Devil May Cry 5 or Resident Evil 2 when they came out this bundle will certainly be appealing. This is a good game bundle and will help this model sell better. That bundle adds up to about a $180 value, and helps sweeten the deal for those in the market to buy a mid-range graphics card. It’s nice to see one AAA title in a game bundle, let alone three AAA titles! Gamers purchasing a Radeon RX 580 or Radeon RX 570 graphics cards and/or powered PCs can choose two of these games for free. 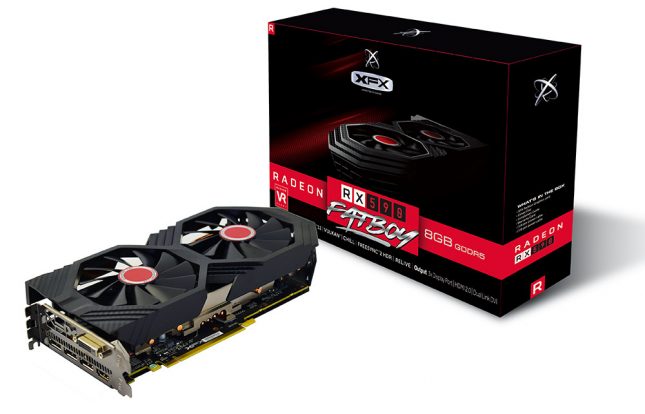 The card that we were sent to review is the XFX Radeon RX 590 Fatboy. This is the only Radeon RX 590 that XFX has for the time being and is available now for $279.99 shipped. We asked XFX why they are calling this card a Fatboy and they basically said it was the result of a marketing team brainstorming session and stuck due to the cards larger than normal heatsink. XFX did not respond to our question if someone inside the company purchased a Harley-Davidson Softail Fat Boy motorcycle recently. We have strong suspicion that someone at XFX might have! 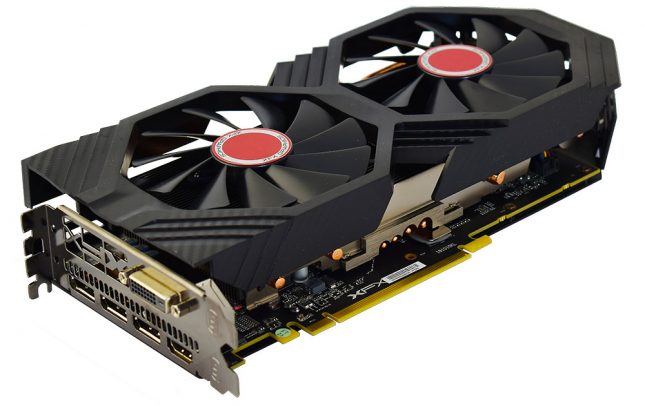 The XFX Radeon RX 590 Fatboy takes up more than two PCI slots since the cooler extends further than a dual-slot design. The XFX Radeon RX 580 had a GPU cooler that was 16.96mm thick and this new Radeon RX 590 model GPU cooler is 25.96mm thick. XFX told Legit Reviews that the heatsink surface area of the RX 590 Fatboy is 50% larger. The Radeon RX 590 has a higher TDP than the Radeon RX 580, but XFX says they are seeing 2% cooler GPU temperatures thanks to the new GPU design. The entire PCB was redesigned for the RX 590 as it needed to have 1 x 8-pin and 1 x 6-pin PCIe power connectors to reach the higher clock speeds. The minimum suggested power supply to run one Radeon RX 590 graphics card is 600 Watts.

Since we are talking about clock speeds we should note that the XFX Radeon RX 590 Fatboy comes factory overclocked to 1580MHz. XFX rates this card as being 1600MHz though and that is the cards OC+ speed. Out of the box the XFX Radeon RX 590 runs at 1580MHz, but XFX guarantees it to run at 1600MHz if one would like to manually overclock it with AMD’s Wattman utility that comes in the video card drivers. XFX confirmed to Legit Reviews that using Wattman will not invalidate any warranty and that they 100% support software overclocking. If you buy the Radeon RX 590 Fatboy and it doesn’t run at 1600MHz then you can have the card replaced under warranty. There is no OC+ setting on the memory clock frequency. 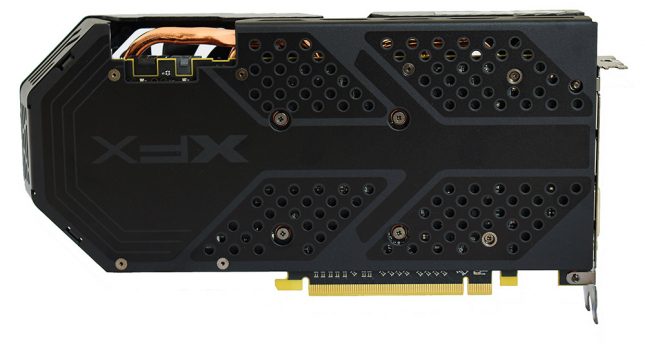 Every Fatboy comes with a backplate to protect the soft and supple areas of the graphics card. The backplate also helps the Fatboy by stiffening up the PCB to keep it from being damaged if it is ever flexed.

Video connectors on the Fatboy shouldn’t disappoint as it comes with 5 of them – three DisplayPort, one HDMI and one DVI-D. Check out the girth of the Fatboy… It has to be pushing at least 2.2 slots wouldn’t you say? Actually, XFX says that it takes up 2.5 slots. It’s pretty common for men to exaggerate those types of figures, so we’ll let you decide. 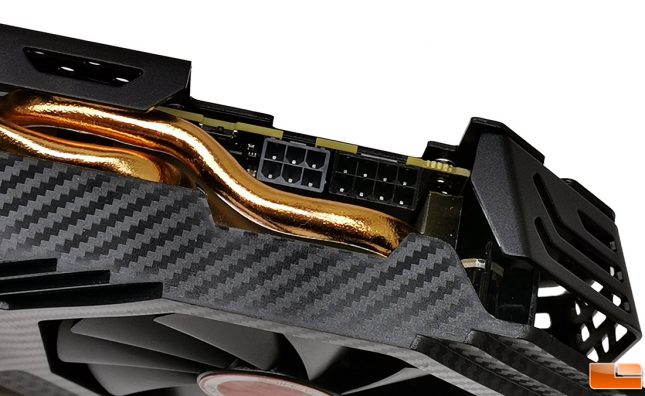 Along the top edge of the card hidden in the Fatboy rolls you’ll find a tiny dual inline package switch (DIP switch) that allows you two switch between two BIOS versions. The Fatboy ships with the switch closest to the power connectors and this gives you optimal gaming performance with good temperatures. For a more silent experience, shut the system down and move the DIP switch away from the power connectors. This enabled XFX’s stealth BIOS that runs the fans at lower speeds for less noise.