ROG STRIX B550 Boards Are Ready For The Future

When the AMD B550 motherboards were set to launch we reached out to ASUS and inquired about getting their lowest cost motherboard out to look at. The thought of having a low priced AM4 board with 20 general-purpose PCIe 4.0 lanes for 3rd Gen AMD Ryzen CPUs is most certainly appealing. It is also nice to know that these boards will support future AMD Ryzen 4000 series processors that use the upcoming Zen 3 architecture will drop right in and just work. So, the AMD B550 motherboards should be exciting to anyone that hasn’t already built a Ryzen system recently. 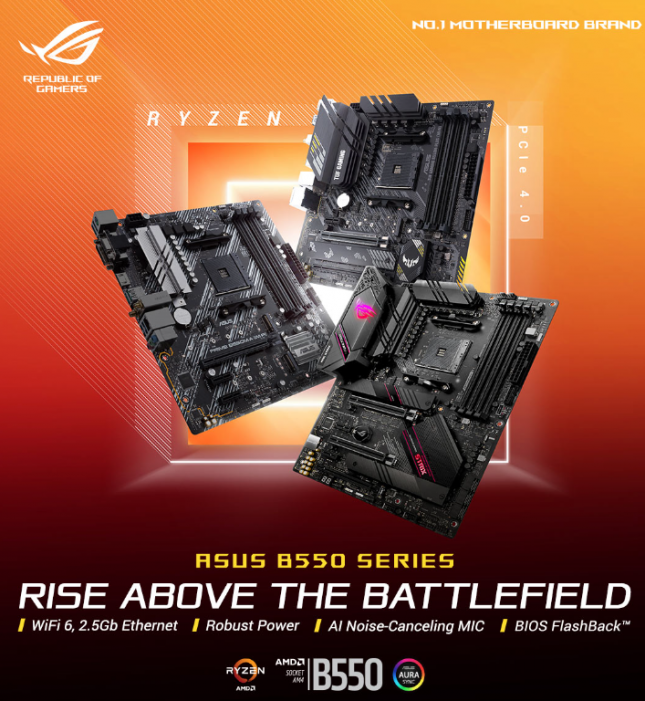 ASUS has an impressive lineup when it comes to B550 based boards with not more than eleven different models. Pricing starts at $134.99 and goes all the way up to $279.99! That is a bit higher than we had hoped for as the ASUS Prime B450M-A motherboard (pricing) that came out in 2018 usually hovers around the $79 price point and we’ve spotted it as low as $59!

So, while we asked for the ASUS Prime B550M-A due to being the most affordable board currently available from ASUS… 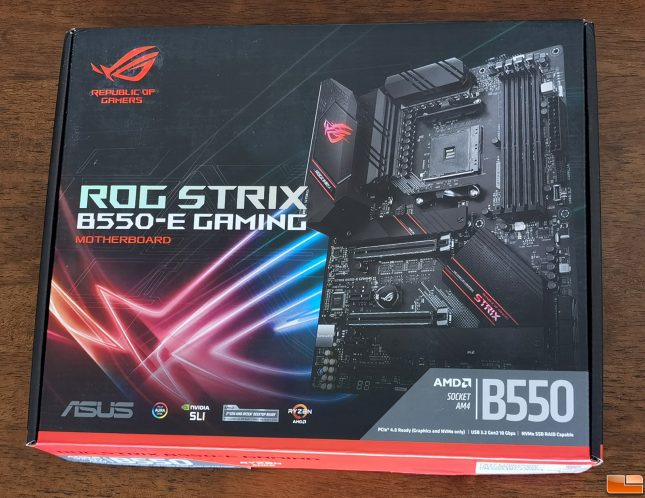 We ended up getting the ROG Strix B550-E Gaming motherboard. Yes, the most expensive board in the lineup that is priced at $279. 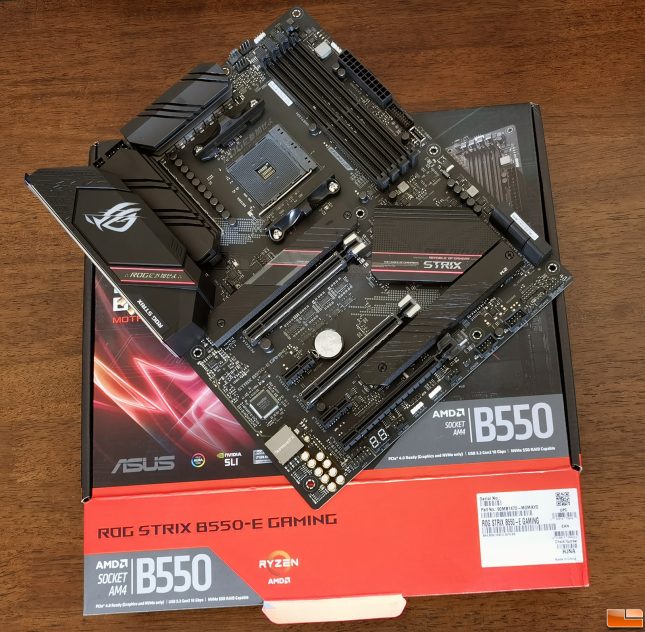 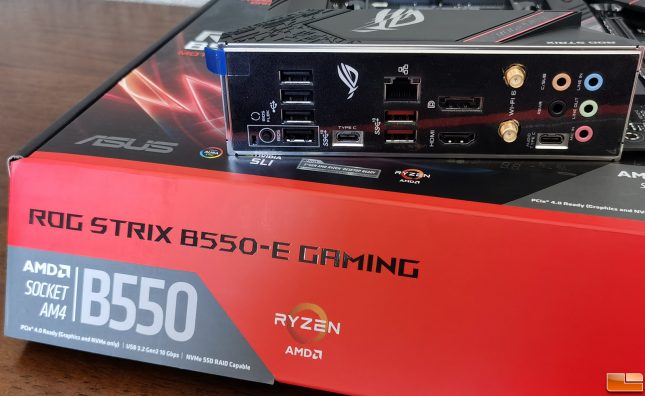 We started to benchmark the $279 B550 board against the $189 X570 board, but all the CPU benchmarks were within a couple percentage points of one another. So, rather than showing over a dozen benchmarks focused on CPU performance that are all the same we are going to try something new today and just show off the highlights of this new board. 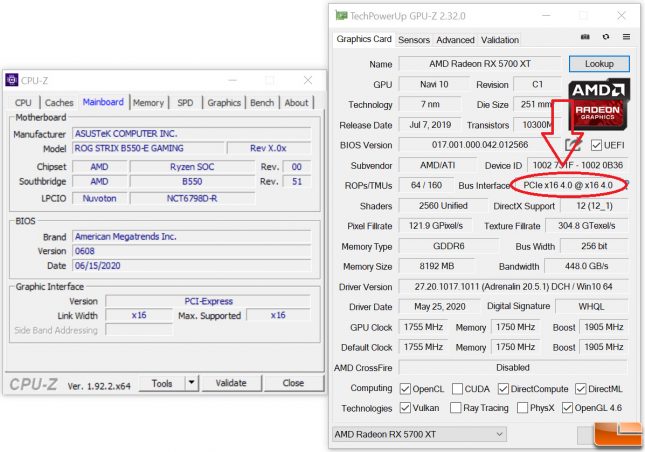 The number one reason the B550 motherboard launch is so exciting is because it makes building a PCIe 4.0 system cheaper in theory. Our flagship ROG STRIX B550-E GAMING board is the highest priced B550 board from ASUS, but you can get this feature on any B550 board. Having PCIe 4.0 lanes will help future proof your system, but your graphics cards like the AMD Radeon RX 5700 XT already utilize the PCIe 4.0 interface as you can see from our screen shot above. NVIDIA Ampere GPUs are rumored to support PCIe 4.0 and we’d expect AMD to continue to introduce PCIe 4.0 discrete graphics cards. 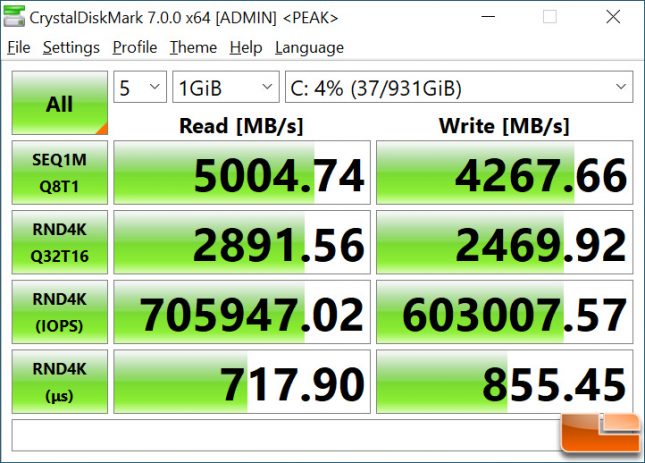 The AMD B550 chipset supports 20 PCIe 4.0 lanes, so while 16 of those lanes will likely go to your one or two graphics cards, the other four lanes are allotted for an M.2 PCIe Gen 4.0 x4 SSD. We installed Windows 10 Pro 64-bit with the May 2020 update on the ROG STRIX B550-E GAMING motherboard and was able to hit over 5 GB/s speeds! A Corsair Force Series MP600 1TB PCIe Gen4 x4 drive ($199.99) was used for this benchmark. Reaching 5,005 MB/s sequential read and 4,268 MB/s sequential write is impressive, but you need to remember this is a first generation drive. All of the current Gen 4 M.2 SSDs on the market right now are based on the Phison E16 controller that is basically the Phison E12 controller with a Gen 4 PHY. It was a stop gap solution until the first fully redesigned PCIe Gen 4.0 controllers come to market. The Phison 18 controller is coming later this year along with other controllers from Samsung and Innogrit. Once those hit the market you’ll see over 7,000 MB/s sequential read speeds! This is one of the HUGE selling points of say a B550 board over a B450 model. Intel currently has no PCIe Gen 4.0 desktop boards on the consumer market.

3) 2.5G LAN –  For Those Dreaming of Multi-Gig Home Networks 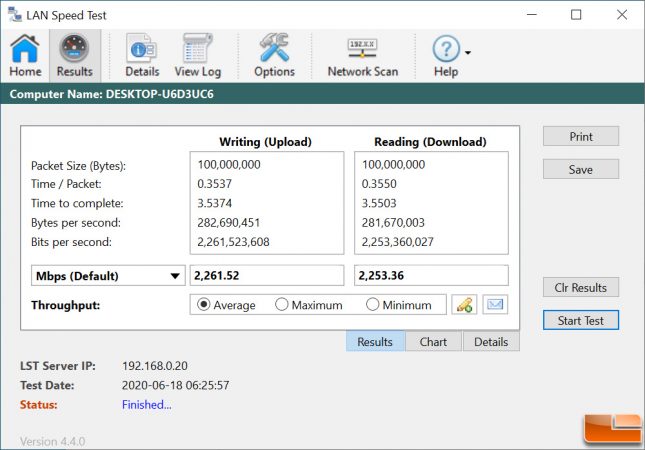 Gigabit LAN has been around for decades and we are finally starting to see more boards with 2.5G, 5G and 10G LAN ports on them. All of the ROG STRIX B550 Series boards have Intel I225-V 2.5Gb ethernet ports on them and they are wicked fast! On the ROG STRIX B550-E GAMING motherboard we were averaging over 2,250 Mbps speeds with this solution on a Multi-Gig network.

Wi-Fi 6 is the latest  generation standard in WiFi technology. Wi-Fi 6 also known as 802.11ax builds and improves on the now dated 802.11ac WiFi standard. Wi-Fi 6 uses both 1024-QAM to provide a signal packed with more data and a 160 MHz Channel. It also features 8×8 uplink/downlink, MU-MIMO, OFDMA, and BSS Color to provide up to 4x larger capacity and to handle more devices. All of the ASUS ROG STRIX B550 series boards with Wi-Fi 6 use the Intel Wi-Fi 6 AX200 2×2 (max speed 2.4 Gbps) solution that also supports Bluetooth 5.1. On our Multi-Gig network we peaked at 1,347 Mbps upload speeds and 454 Mbps download speeds. That is blazing fast and about 40% higher than WiFi 5 (802.11ac) solutions that we have recently tested.

The ROG STRIX B550-E GAMING motherboard has a USB 3.2 Gen2 Type-C port on the rear panel and support for another USB 3.2 Gen 2 Type-C for the front panel. USB 3.2 Gen2 delivers 10 Gbps speeds and is a must for content creators that might be moving files around with portable SSDs. We tested a half dozen portable SSD enclosures on the ROG STRIX B550-E GAMING motherboard and all performed great. The Jmicron JMS583 A2 powered devices managed to hit 1030 MB/s read and 978 MB/s write with the 2TB HP EX950 SSD. The ASMedia 2362 based enclosures topped out at 1019 MB/s read and 970 MB/s write. So, no matter what portable SSD you are using, you should end up with a good user experience on B550. 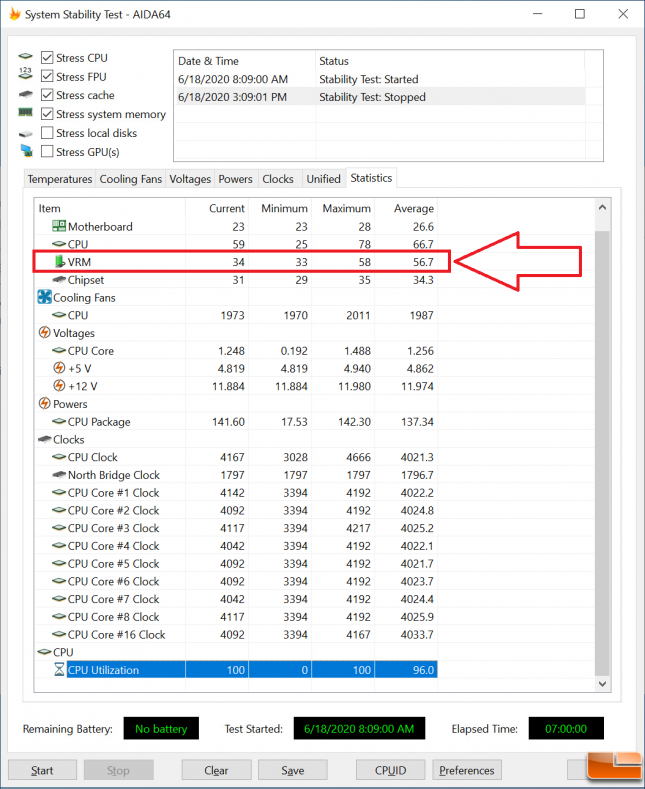 ASUS went with some pretty massive VRM heatsinks along with a decent sized PCH heatsink on the ROG STRIX B550-E GAMING motherboard. We ran the AIDA64 stress test for 7 hours with the AMD Ryzen 9 3950X 16-core, 32-thread processor in the board and never got above 58C on the on the VRM temperature reading. The processor was run at stock settings with 32GB of DDR4 3600 MHz memory with an FCLK of 1800 MHz. The total CPU package power for this test was 142.3 Watts. This is pretty impressive and many of the VRM enthusiasts are considering this a top tier VRM solution for a B550 board from any manufacturer. 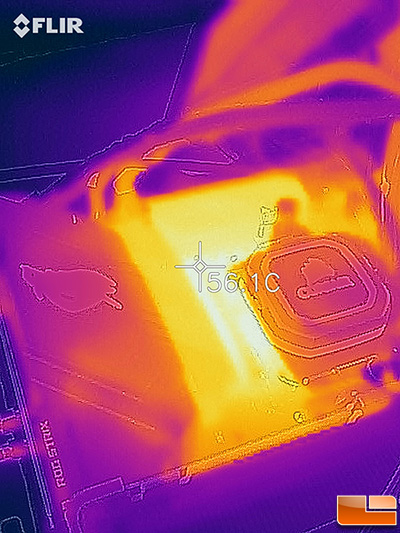 A quick spot check with our FLIR ONE camera on our smartphone saw fairly similar results during testing.

Some of you might be dissapointed that we only used a Ryzen 9 3950X for load testing and we anticipated that reaction! So, we also ran a Ryzen 5 3600X 6-core, 12-thread processor into the ROG STRIX B550-E GAMING motherboard. The CPU package power peaked at just 79.6W and the VRM temperature hit at most 52C while the CPU reached 69C. Great results for a passive VRM solution on our open air test bench.

We hope you enjoyed this rather unorthodox review of the ASUS ROG STRIX B550-E GAMING motherboard and that you now have a better understanding of what the board is capable of delivering. It is most certainly a feature rich mainboard that is based on the brand new B550 chipset. The $279.99 price tag will be daunting to many, but it has features that many of the AMD X570 boards are lacking. The ‘B’ in B550 stands for Basic, but this feels anything like a basic motherboard!

That said, we are fully aware that the fast majority of people shopping for a B550 motherboard aren’t going to be buying a $280 board.  Moving down to the ASUS ROG STRIX B550-F (Wi-Fi) model will save you $70 (board costs $209.99) and you still get the same Wi-Fi 6 solution, 2.5Gb LAN, SupremeFX S1220A Audio solution and PCIe 4.0 lanes. Some of the things you don’t get are the Audio USB Type-C port, SLI certification, and you end up with a smaller 12+2 power design. If you don’t want wireless the ROG Strix B550-F GAMING will remove that and save you an extra $20 (board cost $189.99) or $90 from the ROG STRIX B550-E GAMING. All ROG Strix B550 Gaming Series boards include a TB_HEADER for support of the ThunderboltEX 3-TR add-on card for those that are wanting that functionality.

Take a look at the specifications table and key feature bullet list that ASUS shared with us to see the differences between the models. 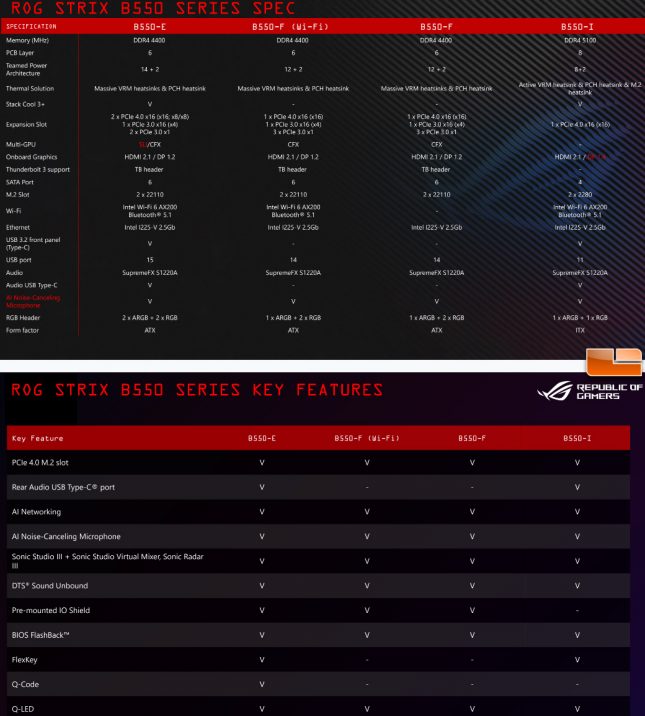 Lastly, we’ve seen some confusion around the PCIe 4.0 lanes and the difference between the new B550 mid-range chipset and the X570 high-end chipset. If you are running a 3rd Gen AMD Ryzen desktop processor you’ll have 24 PCIe 4.0 lanes available on the CPU. If you plug that CPU into an X570 board all 24 lanes are usable as 16 lanes can be used for graphics, 4 are used for storage drives and 4 connect to the AMD X570 chipset.

If you take that same processor and place it into a B550 board you’ll still have 16 available for graphics and 4 for storage drives, but the interconnect to the AMD B550 chipset has 4 lanes that use the PCIe 3.0 interface. So, the big difference between the interconnect on X570 and B550 is the interface that they are using. You might run into some real world situations where this interconnect could become a bottleneck, but you’d have to saturate the PCIe 3.0 x4 interface (theoretical max throughput is 3940 MB/s) for that to become an issue. 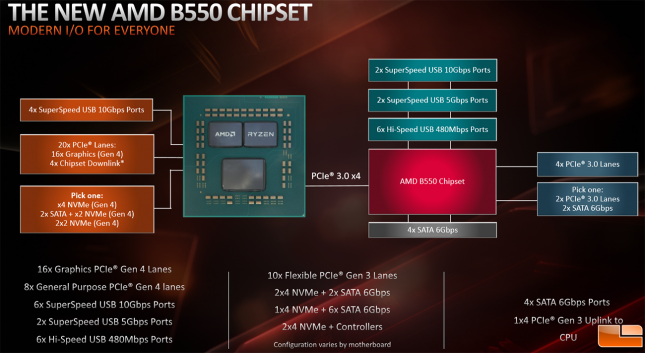 As always we hope you enjoyed the content and feel free to ask us any questions via social media, by email or with the comment system below!