What Is SATA Express and Why It Matters

The Serial ATA International Organization (SATA-IO) recently announced Serial ATA Revision 3.2 and with that comes the first implementation of SATA Express. You know what SATA Express is right? It is the new specification that blends PCI Express with Serial ATA to come up with a super faster interface that alleviates the SATA bottleneck that weve run into with the majority of high-end Solid-State Drives (SSDs). The SATA III specification allowed for up to 6Gbps (600MB/s), which was fast back in the day, but now with the new the SATA Express standard you can expect to speeds of up to 16Gbps (1.97GB/s) very soon. 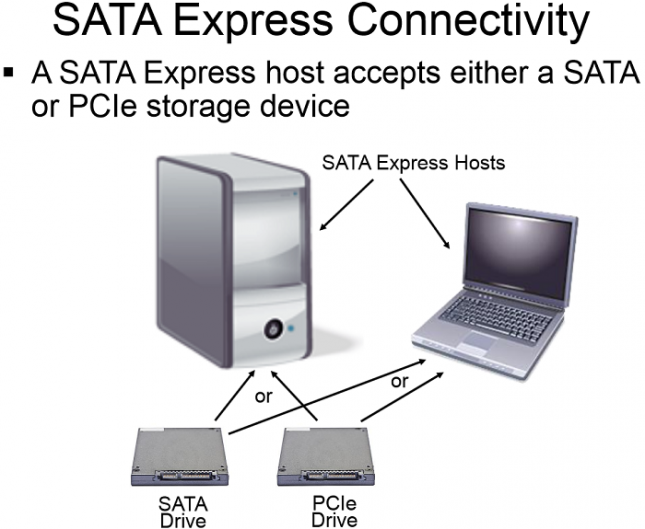 The SATA Express standard supports both SATA and PCIe storage solutions, unfortunately you can’t run both in tandem. Basically this means that if you plug in a SATA device that you’ll be using just SATA and if you plug in a PCIe device you’ll be running through only PCIe. The drive tells the host if it is PCIe of SATA. If you are running a PCIe device there will be 2 lanes of PCI Express available and that means you have the ability to have up to 16 Gbps (1970MB/s) of performance (8Gbps per lane) on PCIe Gen 3.0 or up to 10 Gbps (1000MB/s) on PCIe Gen 2.0. The PCI Express bus that you are running on and what bus the PCIe controller supports on the storage device is crucial. 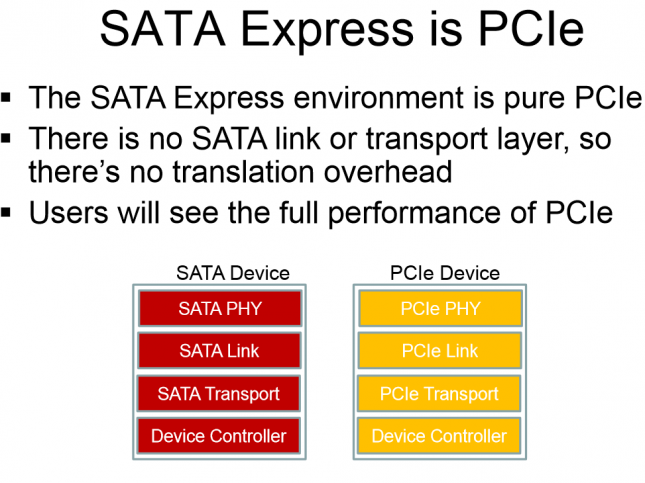 The upcoming Intel 9 series of chipsets will natively support one SATA Express device, so get ready to hear all about SATA Express for years to come. Intels SATA Express implementation uses a pair of PCH PCIe Gen 2 lanes along with two SATA III ports for SATA Express. This means that it is limited to around 10Gbps (1000MB/s) when it comes to the data rate. This means that you wont be tapping into the full power of the SATA Express specification right now since PCIe Gen 3 lanes aren’t being used, but it is 67% faster than that you get from a single SATA III solution. When it comes to real world sequential read/write performance, you are looking at up to 745/809MB/s on a SATA Express drive like the ASUS Hyper Express, which uses a pair of mSATA SSDs in RAID to get that performance. ASUS says users of their boards with SATA Express with the Hyper Express drive will be able to move a 10GB movie file in about 10 seconds. Running a pair of SATA III SSDs in RAID that are able to saturate the SATA III bus is similar to this, but it is in the same ball park as a SATAe device that is able to max out its bus.

Computer users will be able to get 2000MB/s SATA Express performance once the chipset and controller companies move over to PCIe Gen 3 lanes. Some might be disappointed by this, but it doesnt really matter today as there arent any PCIe Gen 3 PCH designs or SSD controllers available and you need both of those components to be updated to get close to that 20Gbps theoretical limit. It is obvious that Intel already supports SATA Express in the upcoming 9 series of chipsets, but we are highly doubtful that AMD will introduce support for SATA Express in any chipsets or SoC processor designs in 2014. There is no word on when PCIe Gen 3.0 lanes will be included on the chipset side, but we know that Intel, LSI/SandForce, Marvell and Samsung are working on both PCIe Gen 2 x4 and PCIe Gen 3 controllers. One that should be coming to market later this year is the LSI SandForce SF3700 Flash Controller that was announced in November 2013.

Due to the fact that SATA Express supports both SATA and PCIe signaling as well as the legacy SATA connectors, there are multiple configuration options available to motherboard and device manufacturers when it comes to connectors. You’ll also see board makers using third party controllers to allow for more than one SATA Express connector on motherboards 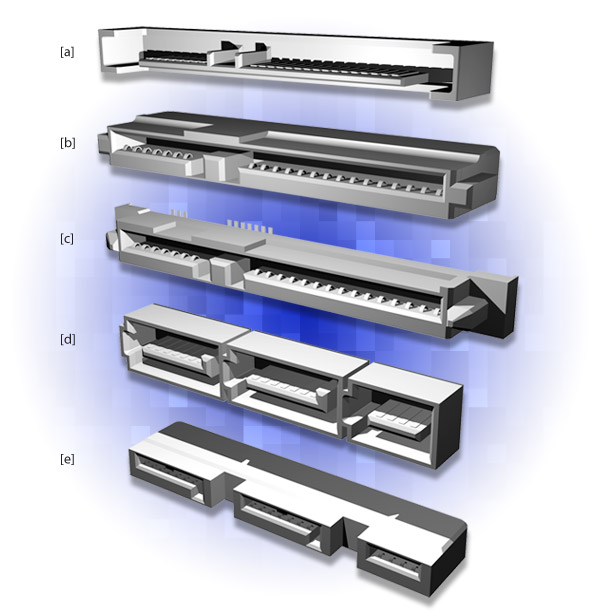 Here is an example of a real SATA Express cable and drive that we recently got to spend some hands on time with. 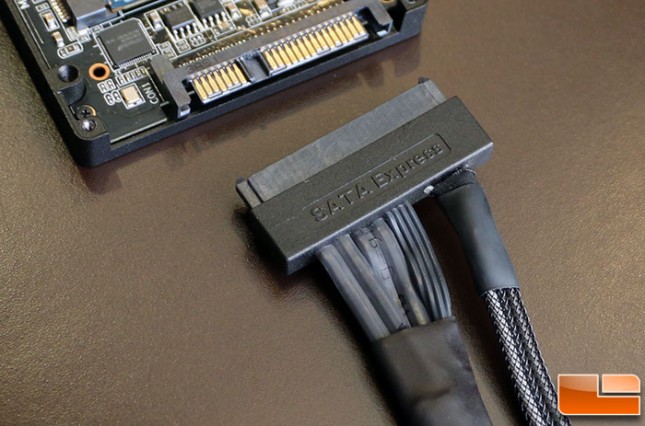 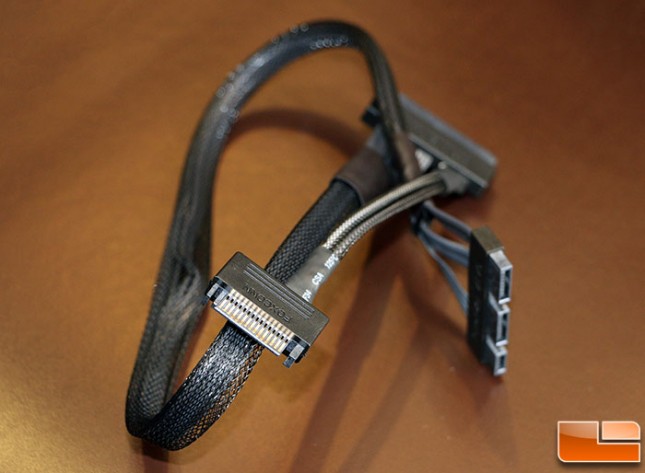 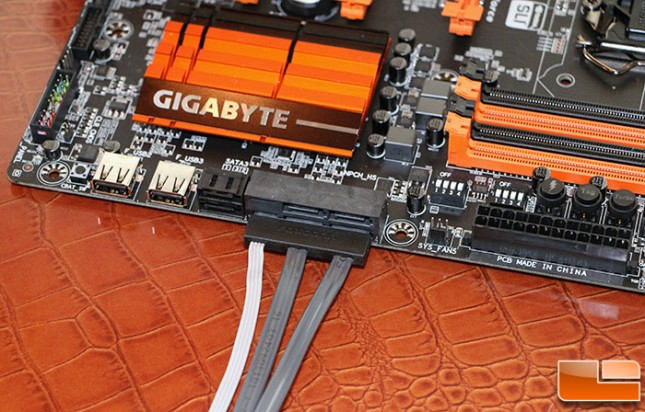 The SATAe connector is pretty massive at nearly two inches in length and not every Small Form Factor (SFF) system out there can fit a SATA Express connector on the board as there isnt enough real estate for one. Many companies appear to be skipping the SATA Express interface and using an m.2 slot on mini-ITX boards due to the limited motherboard real estate available. M.2 is just a form factor though and is part of the SATA Express standard as well.

SATA Express also supports various host controller interfaces. You have the usual support for AHCI (Advanced Host Controller Interface), but SATA Express also supports Non-Volatile Memory Express (NVMe). NVMe looks really promising as it was designed from the ground up for SSDs and PCIe storage solutions. The bad news is that it is still some time away from being useful to consumers since Windows 8.1 isnt fully NVMe ready and does not provide SATA software compatibility. Basically you can get a device running NVMe working in Windows 8.1 right now, but not as a boot device. NVMe is clearly the front runner to be the premier host controller interface and that will likely happen with the next version of Microsoft Windows is released. When it comes out you can expect to see better performance and latencies.

We hope this helps answer some of the questions that you have about SATA Express and if you still have any open questions please ask them and we’ll try to get them answered for you! You can also take a look at the ASUS Hyper Express drive that uses SATA Express here.