The TOUGHRAM XG RGB RAM modules are the newest editions to Thermaltake’s memory lineup. These 16GB (2x8GB) kits come in four variants: 3600MHz, 4000MHz, 4400MHz, and 4600MHz. They have a total of 16 addressable LEDs, a 10-layer PCB with 2oz copper foil plating, and a heat spreader design with two different colors of aluminum and trimmed with a chrome stripe in the middle. Although compatible with several major RGB lighting software, Thermaltake does have their own exclusive TOUGHRAM software for RGB customization. 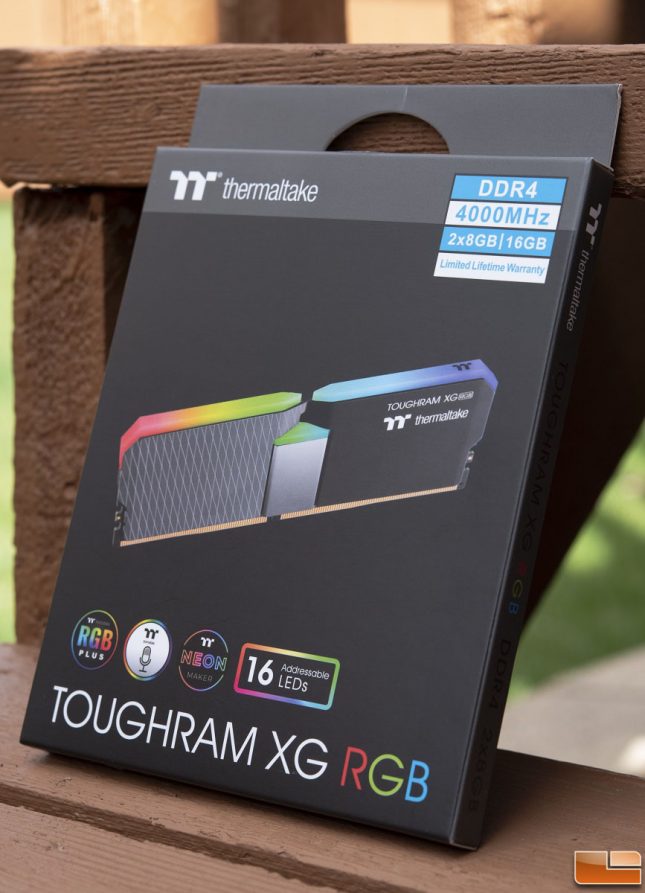 All variants of the TOUGHRAM XG RGB memory are backed with a limited lifetime warranty. We were kindly sent the 16GB kit at 4000MHz, which has a tested latency of 19-23-23-42. It also comes priced at $184.99 shipped on Amazon. Let’s take a look at the packaging along with its features and specifications. 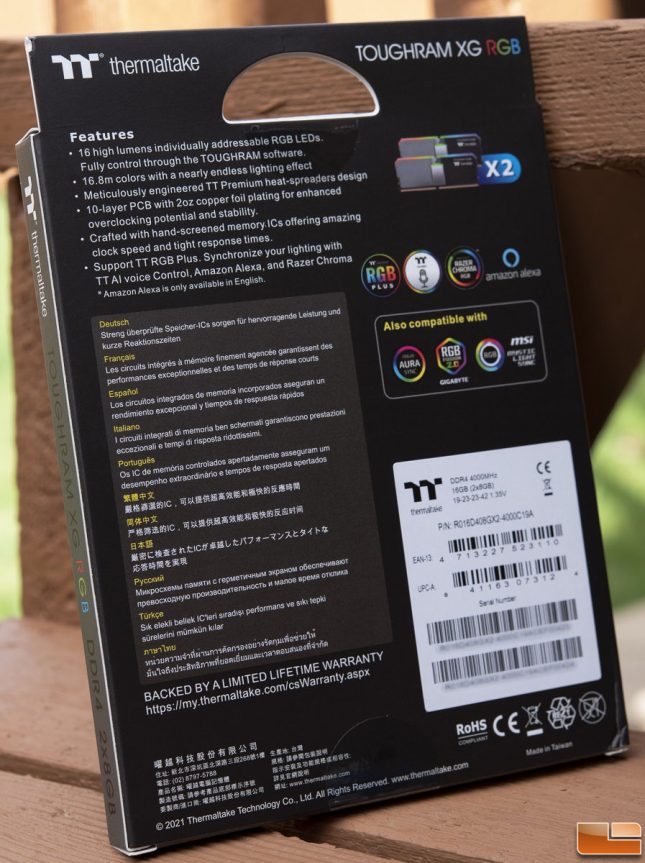 Once the TOUGHRAM XG RGB RAM modules are out of the packaging, we can see they are nicely packaged in a protective plastic casing. No additional accessories are included in the packaging. 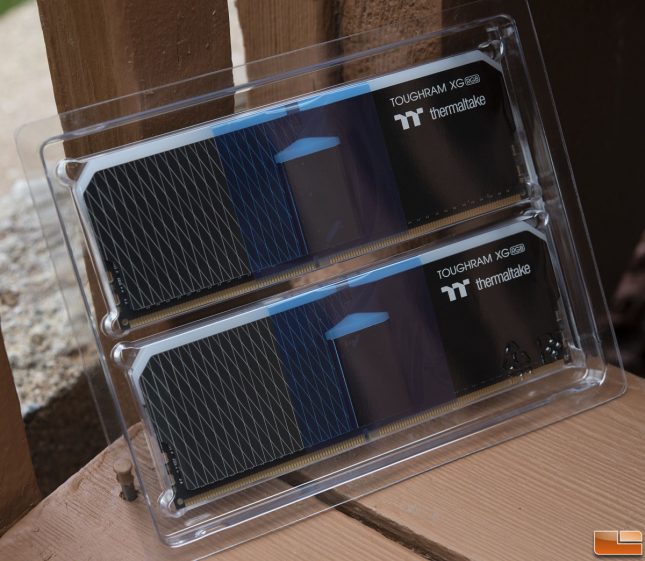 Here we can see the design of the aluminum heat spreader. It has two different colors of aluminum and trimmed with a chrome stripe in the middle. The chrome stripe has a reflective finish, which adds a modernized look and feel to the RAM modules overall. 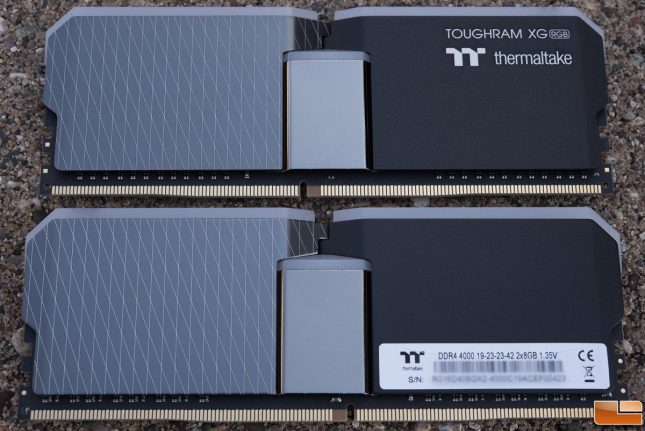 At the top of the TOUGHRAM XG RGB RAM modules, there is an X-shaped light bar. This light bar is definitely an improvement over the previous TOUGHRAM RGB modules. There are eight LEDs per module with a light diffuser. This eliminates the ability to see the individual LEDs in the light bar. 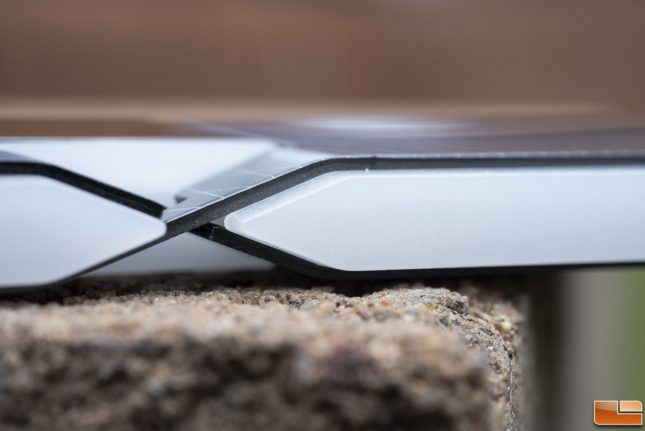 Taking a quick look at the TOUGHRAM RGB software, it has a nice and simplified user interface for easy navigation. In the Information tab, we can see how many RAM modules are installed, the current memory usage over total available memory, and other useful statistics. I was very thankful to see a temperature monitor as well for monitoring each individual module. 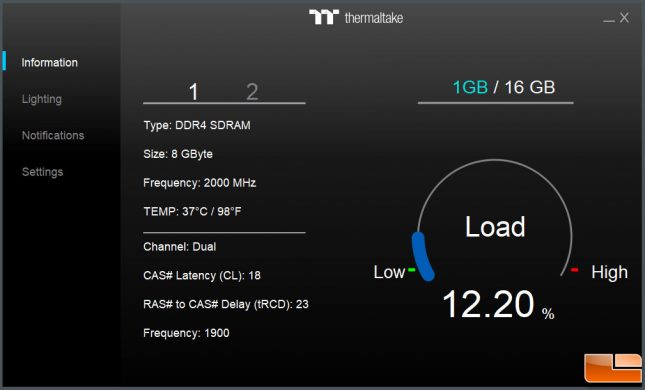 In the Lighting tab, this is where we can choose between 28 different lighting effects. Each of the 16 LEDs on this kit are addressable. The software also has a preview of what the RGB lighting effects will look like before applying the settings. There is also a Light Speed, which offers different speeds at which the lighting animation plays. Unfortunately, lighting transitions are not smooth unless the speed is set to Extreme. 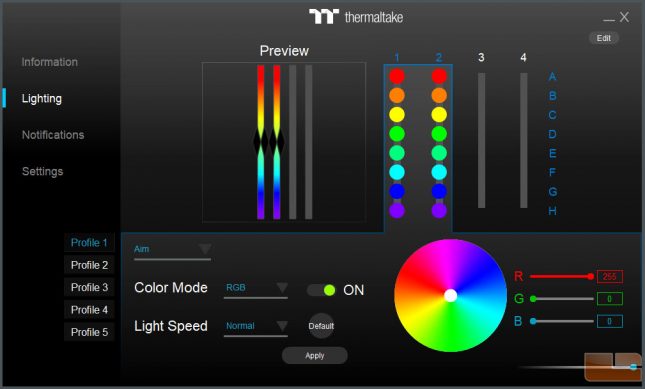 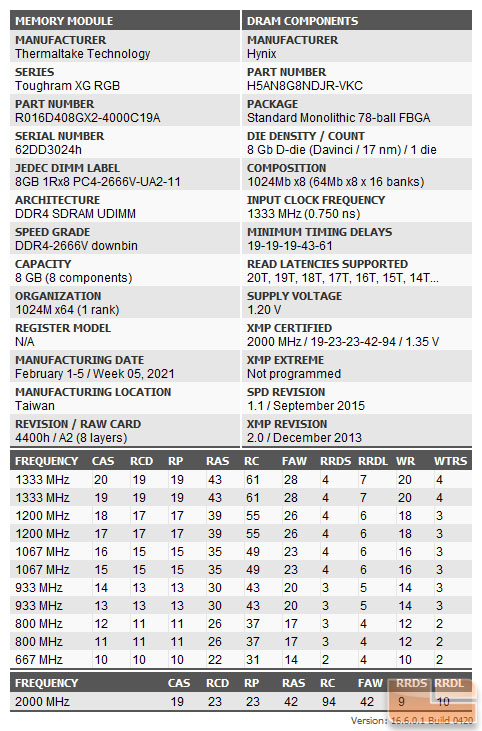 I tested the TOUGHRAM XG RGB 4000MHz RAM at its stock voltage of 1.35v on the MSI B550M Bazooka motherboard with an AMD Ryzen 3900X. The 3900X has an all core overclock of 4.2GHz with 1.3v and cooled with the Corsair H150i RGB PRO XT liquid cooler. I was also able to demonstrate why going with a 4000MHz memory kit is not the most ideal choice for a Ryzen platform. 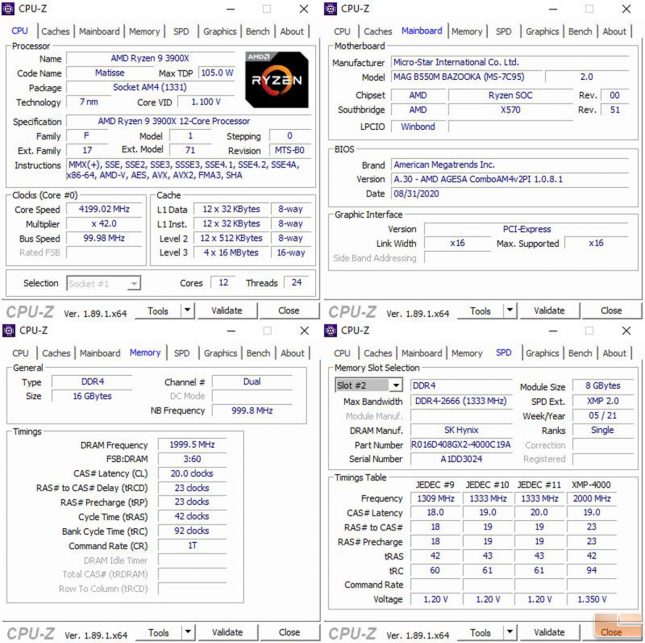 At 3800MHz DRAM/1900MHz FCLK, we received the overall quickest results of 68.3ns compared to the 80.8ns with 4000MHz DRAM/1000MHz FCLK. The results were as expected since the memory frequency and Infinity Fabric clock were running at the same frequency. However, there are certain applications that favor the higher DRAM frequency. It is always best to stick to a 1:1 ratio, which we were able to achieve at 3800MHz. On an Intel system, the results will mostly likely be better.

I did have to do some tinkering around to get the motherboard to run 4000MHz at the factory timings (19-23-23-42). Initially, I had the command rate set to AUTO and tRCD set to 19 in the BIOS. It still showed up as CR1 in CPU-Z, but tRCD was 20 instead of 19. The reason behind this had something to do something DDR4’s Geardown Mode. Even though CPU-Z showed CR1, the motherboard had command rate automatically set to Geardown Mode. After some research, I set the command rate to 2. Doing so allowed the RAM to run at 19 tRCD instead of overriding to 20. This was not the most user-friendly experience, but perhaps it may be different for Intel platforms.

When it came to performance, the TOUGHRAM XG RGB performed similarly to the last generation. I do not own one of the last generation RAM modules, so I am unable to confirm if they are indeed the same chips. But according to the Thermaltake website, the TOUGHRAM XG RGB has the same timings as their predecessors. I was surprised to see the same timings on this generation because they are rather entry level.

In terms of RGB lighting, the TOUGHRAM XG RGB modules are brighter and look better than its predecessor. This is because the light bar diffused the light well making it difficult to notice the individual LEDs. The eight LEDs for each module were well placed and color reproduction was very accurate. The TOUGHRAM software had plenty of lighting effects to choose from with the ability to monitor temperature, memory usage, and other useful statistics. 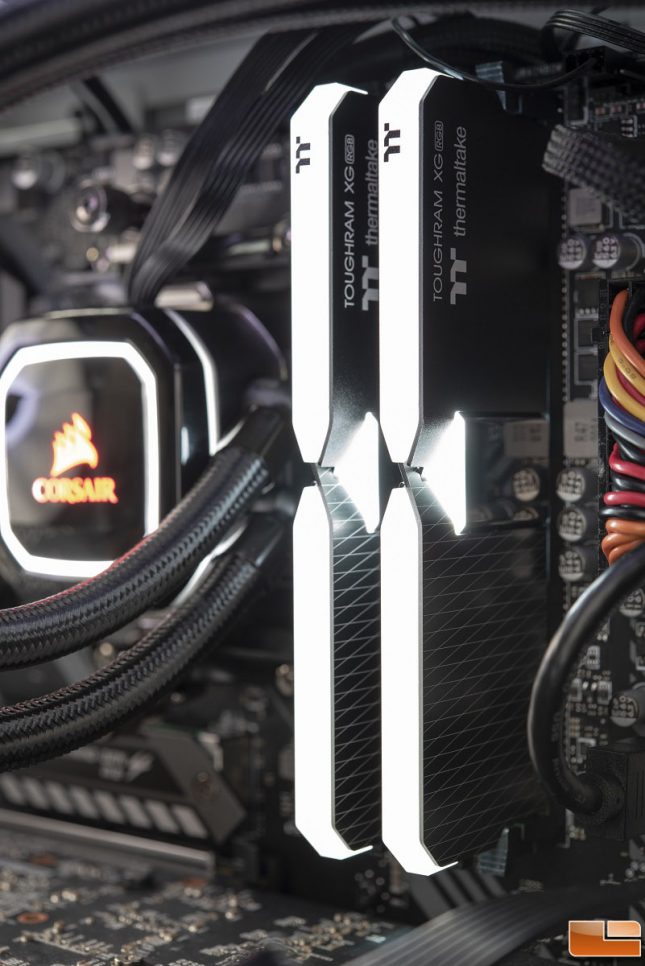 Overall, the TOUGHRAM XG RGB is a good improvement over its predecessor when it comes to aesthetics and RGB illumination. The 4000MHz 16GB (2x8GB) kit is priced at $184.99 shipped on Amazon. There are other 4000MHz RGB memory modules with tighter timings at a lower price range which offer slightly better performance.

Although I will not count the 4000MHz run in my conclusion since I tested with an AMD Ryzen platform, I believe the 3800MHz and 3600MHz results are reasonable to compare to other RAM modules with the same frequency and timings. If Thermaltake is able to improve on RGB lighting with the XG series, they could also do the same in terms of performance. With that being said, I look forward to their next generation of RAM modules.

Legit Bottom Line: The Thermaltake TOUGHRAM XG RGB modules look great with its sophisticated heat spreader design and RGB illumination, but there could be improvements in performance at this price category.