There are many factors to consider when selecting memory. First, is typically the speed, the latest Intel processors officially supports up to 3200MHz, however most motherboards are capable of overclocking that to much higher; some up to 5400MHz. ADATA XPG recognizes that some enthusiasts want the fastest memory available, so they are releasing their Spectrix D50 Xtreme with speeds up to 5000MHz. In addition to being extremely fast, it also includes a solid aluminum heat spreader that has a mirror finish. For those of you that like RGB, ADATA hasn’t forgotten about you either, the Spectrix D50 Xtreme includes an RGB lightbar that is compatible with most of the major RGB systems. 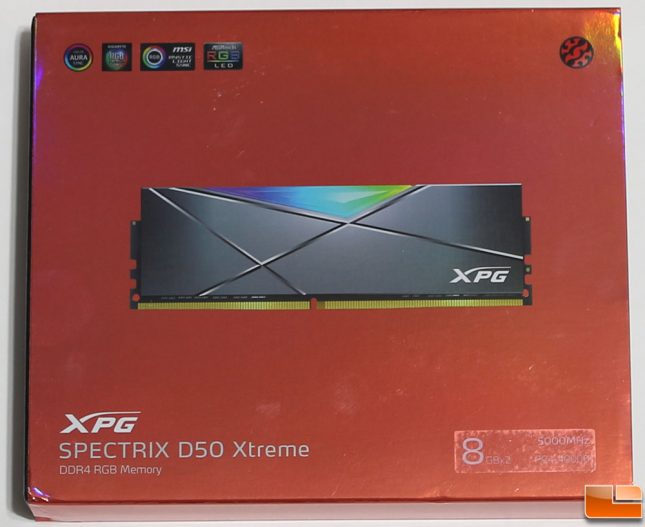 The ADATA XPG Spectrix D50 Xtreme is packaged in a heavy duty cardboard box with a metallic orange sleeve that presents a nice view of the memory. 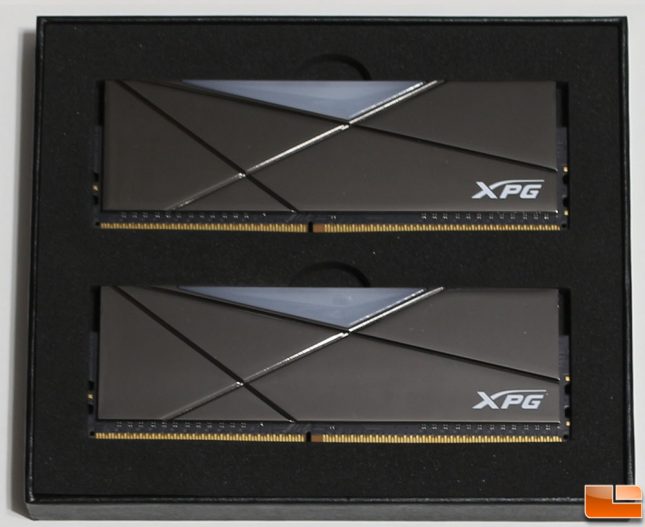 Instead of the usual plastic blister pack type of packaging, ADATA has packaged these in a premium high density foam block. They should arrive at their final destination without any damage being perfectly protected. Included in the packaging is a microfiber cloth to keep them looking their best. 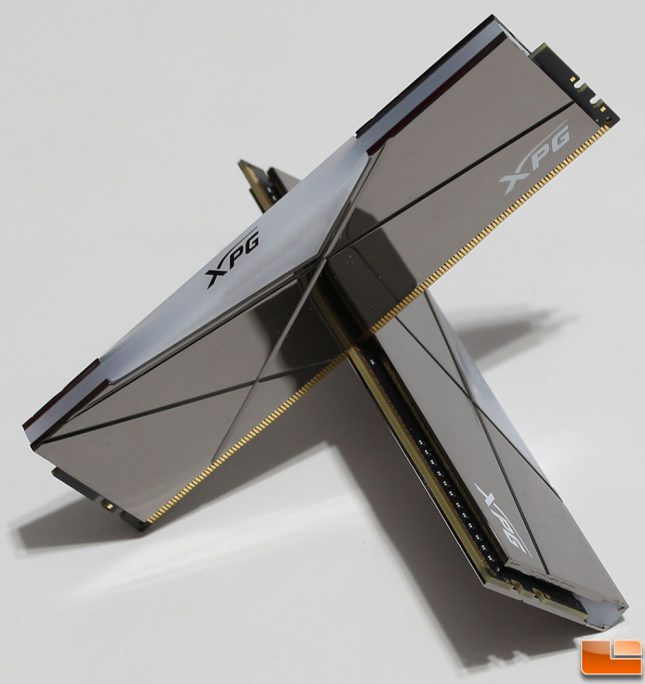 ADATA has designed the aluminum heat spreader with a some geometric designs cut into the aluminum. Instead of being painted, ADATA has given them a very clean mirror finish that will look great in any system. Along the top edge is a light bar, that matches the angular pattern of the heat spreader. While the XPG branding is on both sides of the memory and along the top edge, it’s not over done. 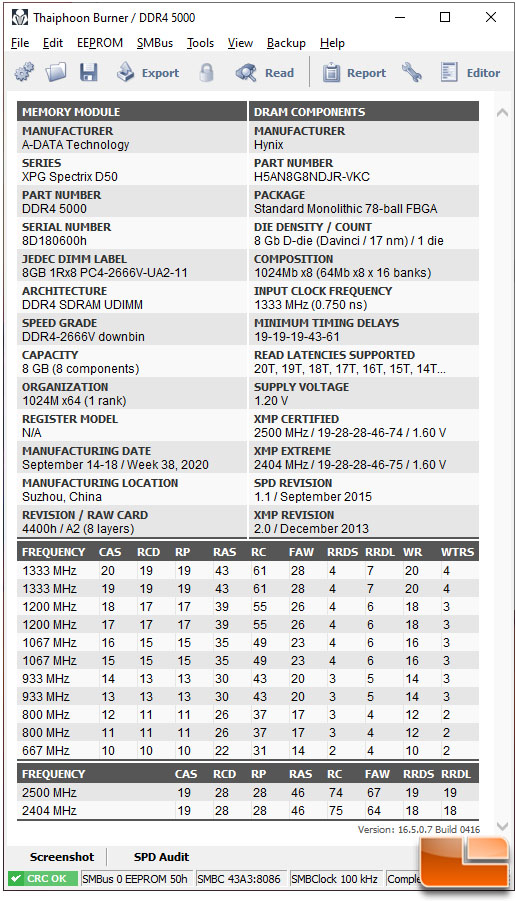 A quick glance at Thaiphoon Burner shows that the ADATA XPG Spectrix D50 Extreme uses single-rank SK Hynix DJR memory ICs. There are two XMP profiles built into the memory, one at 2500MHz (aka 5000MHz) and 2404MHz (4800MHz). 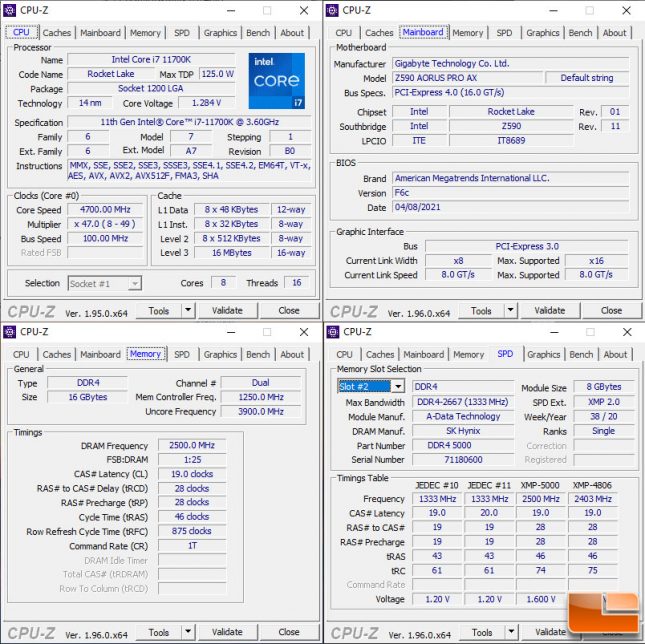 CPU-Z is used so we can get a quick overview of the test system and the memory. Setting the BIOS to use XMP profile 2, CPU-Z verify’s the ADATA Spectrix D50 Xtreme is running at the correct speed of 5000MHz with the correct timings.

Now that we have a general idea of how the ADATA Spectrix D50 Xtreme performs, we turn our attention to overclocking the memory to try squeezing a little more performance out of it. We start with the XMP 5000MHz settings, and slowly increased the speed until we ran into issues. Then we would loosen the timings a little to work towards stability.

Unfortunately, the sample kit that ADATA provided we were not able to squeeze any additional performance with XMP settings. Even going to 5066MHz, we would immediately get a BSOD once Windows begin booting. Loosening the timings to 21-30-30-46 we were able to get it to boot, however as soon as AIDA64 Memory Benchmark was started, we once again got a BSOD. Loosening the timings more did not have any effect on stability.

While we want to say this is a limitation on the ADATA XPG Spectrix D50 Xtreme memory kit, we are hesitant to say that. The Z590 chipset and Intel i7-11700K is pretty new and there are optimizations that can still be done. Perhaps down the road, after a few updates, the memory kit will be able to go beyond 5000MHz.

ADATA has made a name for themselves by developing top quality memory, the Spectrix D50 Xtreme memory kit continues this tradition. The solid aluminum heat spreader with its mirror finish gives it a high end aesthetic appeal while still cooling the memory chips. For those that enjoy the RGB aspect, the RGB light bar along the top edge is pretty common, however the angular cutout provides a nice

While testing was limited to AIDA64 and Sisoftware Sandra, we can see there is potential for performance increase with faster memory. As the Intel Z590 platform matures, I would assume that we’ll see more performance out of this kit with overclocking. Unfortunately, at this time the Z590 platform is relatively new, and needs some optimizations done for overclocking memory. 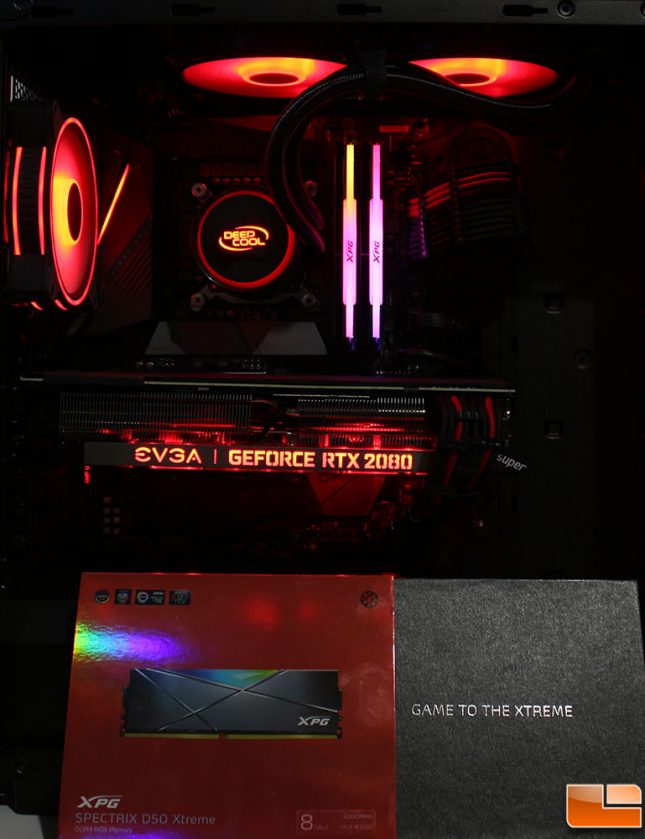 The ADATA XPG Spectrix D50 Xtreme 16GB memory kit is currently available for purchase, with a MSRP of $849.99. This is a high price, however there are only a few 5000MHz kits available, and this is actually the cheapest of them. For many the high price will make them look at other options, at which we would recommend the ADATA Spectrix D50 at 3600MHz or the Spectrix D60 at 3600MHz. Both of which are available for significantly less. However, if you want the best and the nicest looking memory around, the ADATA XPG Spectrix D50 Xtreme should be your first stop.

Legit Bottom Line: While the ADATA XPG Spectrix D50 Xtreme, running at 5000MHz is very expensive, it is one of the fastest memory kits available. It performed well in testing, however we were not able to overclock it any further.