To test out the Thermaltake Big Typhoon VX cooler we ran it on our Intel Core 2 Duo test platform which was then run at default and overclocked settings. All the temperatures were obtained by using Core Temp Beta 0.9.0.91. 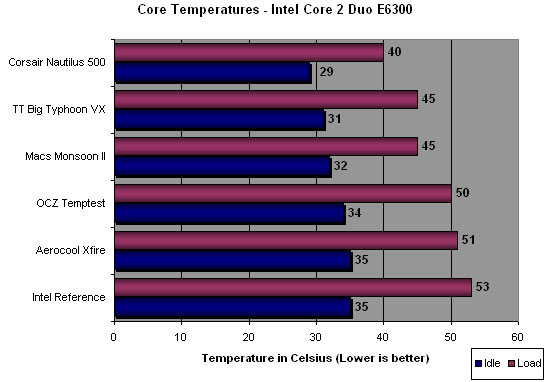 The test results at stock settings between the six cooling solutions that we have run on the abit AW9D-MAX have delivered some pretty interesting restults. The heat sink that comes with Intel retail boxed processors along with the Aerocool Xfire and OCZ Tempest perform roughly the same with the processor set to the default settings at idle and load. The MACS Monsoon active TEC cooler that costs over $100 actually ran 1C hotter at idle than the Big Typhoon VX and it only costs $60 from online retailers. The Corsair Nautilus 500 water cooler stole the show with an idle temperature of 29C.  It was impressive to see how the Big Typhoon VX out-performed the other air coolers and part of the reason is due to the increased number of heat pipes and the more powerful fan.

We pushed the limits of our Intel Core 2 Duo E6300 processor by raised the Front Side Bus from 266MHz to 400MHz and left the multiplier at seven.  This increased the stock frequency of 1.86GHz to 2.8GHz and required a slight voltage increase on the core to operate at such extreme settings. To obtain a stable processor we increased the voltage from 1.325V to 1.4125V in the BIOS and again tested both the five cooling solutions to see how they handle an overclock like this. 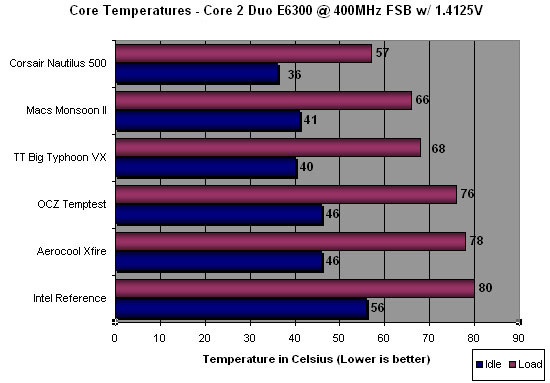 It seems that our overclock was too much for the Intel retail boxed heat sink as it hit 80C and maintained this temperature while the CPU began throttling. It was pointless to continue running our processor at 80C, so we stopped testing and recorded it as 80C.  When compared to the reference cooler the Aerocool Xfire and OCZ Tempest were both 10C cooler at idle with the Monsoon II and Big Typhoon VX coming in 15-16C cooler, but the Nautilus 500 came in an amazing 20C cooler. Once the processor became under full load the temperatures soared up to 76C on the Tempest and 78C on the Xfire while the Monsoon II managed to stay cooler at 66C at full load.  The Big Typhoon did great under load and 68C is by far the best load temperature that we have seen from any air cooler this far. The Big Typhoon VX kept the load temperatures in the 60’s, which is a temperature that we would be comfortable running 24/7. The Nautilus 500 again took the spot light and managed to stay in the 50’s during load testing.  None of the aftermarket coolers throttled and all of them completed full runs of Prime 95 and Super Pi on our Intel Core 2 Duo E6300 test system that was overclocked from 1.86GHz to 2.8GHz.