With a large number of AMD enthusiasts making the move to Intel since the launch of the Core 2 Duo ‘Conoroe’ processors many are not sure what heat sink they should use with their new platform. I have recently tried out the Thermaltake Big Typhoon VX on the Intel Core 2 Duo E6300 ‘Allendale’ processor at default timings and then again with a 1GHz overclock to see how it does with the core voltage increased and the Front Side Bus moving along at 400MHz (Default is 266MHz).

The Thermaltake Big Typhoon VX dwarfs the Aerocool Xfire and makes the OCZ Tempest look like nothing more than a paper weight. The fan that Thermaltake uses with the Big Typhoon VX moves 86.5 CFM of air at 2000 +/- 10% RPM at just 24dBA. The nice thing about using a variable speed 120mm fan is that the speed can be reduced to 1200 RPM’s resulting in a noise level of just 16dBA at idle. The noise level of the fan was unable to be detected by our audio test equipment as the rest of the test system and ambient noise levels were louder than the fan when running at full speed. 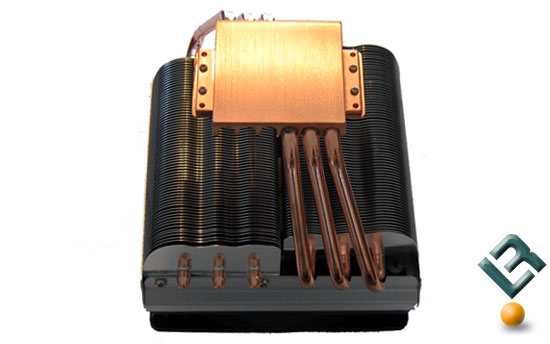 The Aerocool Xfire has a set of ~80 aluminum fins that span 122mm(L) x 122mm(W) x 103mm(H). The two sets of aluminum fins are each connected by three 6mm thick heat pipes to the nickel plated copper base. The base of the heat sink is very smooth, but as with any heat sink on the market today it wouldn’t hurt to have a good lapping with some of your own 2000+ grit sand paper to remove all the marks from machining and shipping. It should be interesting to see how it performs against the reference Intel heat sink as both have been designed using very different technologies. 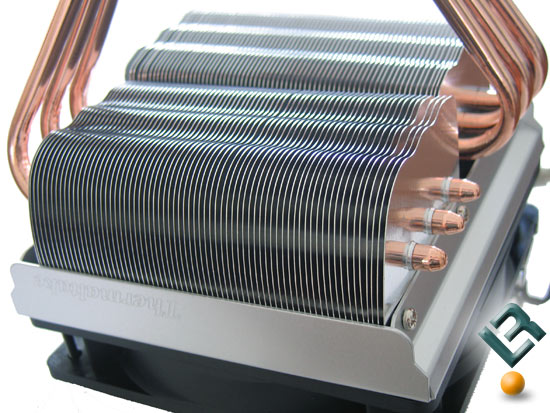 Thermaltake uses waved fins on the base of the heat sink as it has been found that waved fins reduce wind shear noise. The above picture also shows the two sets of cooling fins and a closer look at where the seamless heat pipes run. 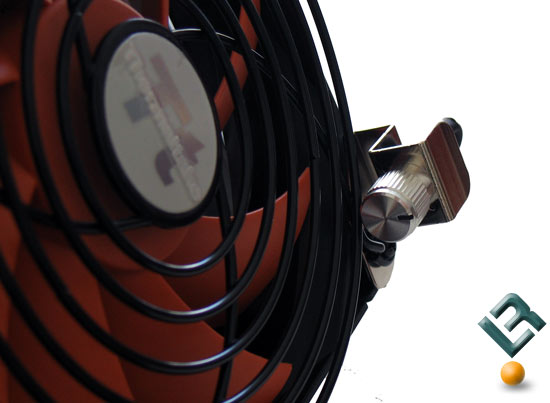 One of the biggest changes that can be found on the Thermaltake Big Typhoon VX is the new fan. The adjustable speed fan is controlled by the knob pictured above and it is mounted on the fan, which means no wires need to be run through the case. The fan is impressive to say the least and the variable speed fan is a very nice touch. On the test bench when I run benchmarks I am able to turn it to high and then turn it all the way to low when full fan speeds are not required. 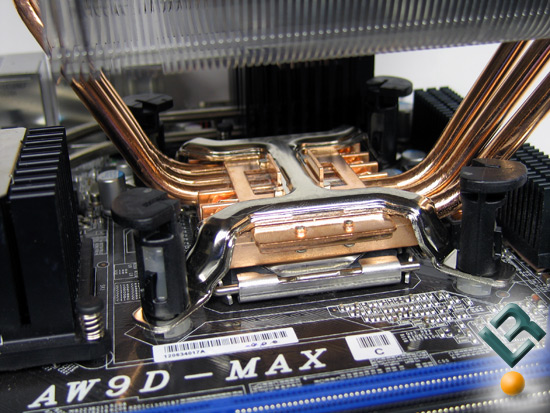 Installing the new Thermaltake Big Typhoon VX heat sink is just like installing the retail box fan as it uses the same retention mechanisms. When I reviewed the Aerocool Xfire I found that it lacked a centering mechanism and the base of the heat sink would move during installation. This caused roughly 8-10mm of the processor not to be covered by the heat sink as seen in the picture above. The Big Typhoon VX doesn’t have the same issues as Thermaltake included little tabs on the heat sink base and the mounting bracket to make sure once the heat sink is installed that it won’t move around on the processor even when the case is being transported. This is a nice touch and shows how a little extra time and money can deliver a well rounded product that consumers will enjoy.

Let’s take a look at the temperatures.