When we saw SuperTalent’s Pocket SSD RAID Array at CES 2010 we couldn’t help but get excited about this USB Flash drive as it will revolutionize the way we carry, store and transfer data between computers. The new SuperSpeed USB 3.0 standard has 10 times the performance of USB 2.0 and is also completely backwards compatible, which means drives like the SuperTalent USB 3.0 RAIDDrive will work in both USB 2.0 and USB 3.0 ports. SuperTalent claims this USB Flash drive can easily hit 300MB/s transfer speeds on USB 3.0 ports and if you back up large databases or move around large files on a daily basis you know how this could save you a ton of time. 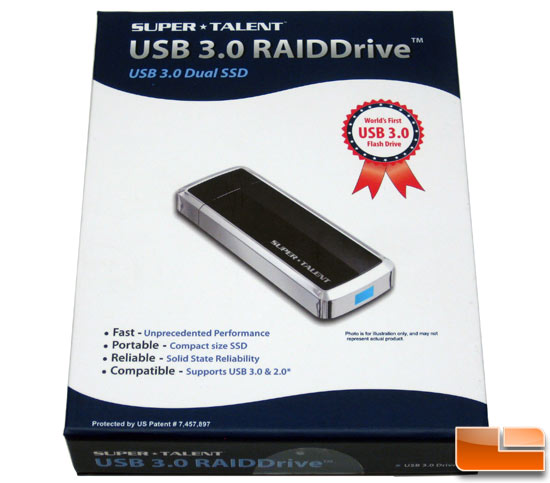 Super Talent offers the USB 3.0 RAIDDrive in three different capacities, and obviously the capacity will directly impact the price point that the drive can be found for. Most people also forget that SSDs and most Flash devices have different performance levels at varying capacities due to the controller design being used. A good rule of thumb to remember is that the larger capacity drives usually perform faster than the smaller capacity drives. This isn’t always true, but the internal Super Talent RAIDDrive performance numbers can be seen below and show this is the case.

Today, we will be looking at the Super Talent 64GB RAIDDrive. This drive is listed under the part number ST3U64SRK and can be found for $329 shipped. You can find 64GB USB 2.0 Flash drives for $128 after rebate, so you can see that USB 3.0 Flash drives are coming at a significant price premium. 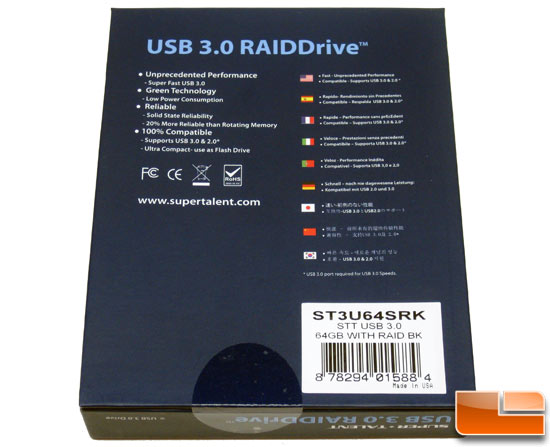 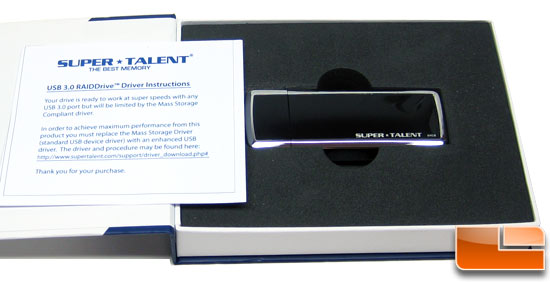 Inside the retail packaging you get just the RAIDDrive and instructions saying that special Super Talent USB 3.0 RAIDDrive drivers are needed for the best possible performance. 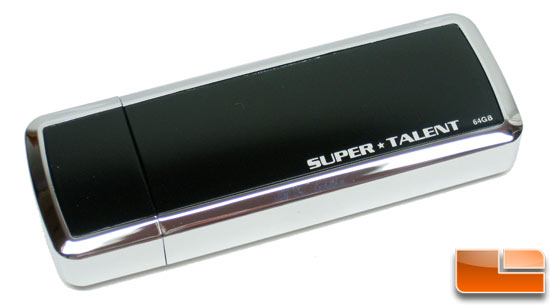 From the outside the Super Talent RAIDDrive is a rather large device at 95 x 34 x 15.4 mm. In fact, you really need a picture of it compared to other devices as telling you the sizes and showing it by itself doesn’t really put things into perspective. 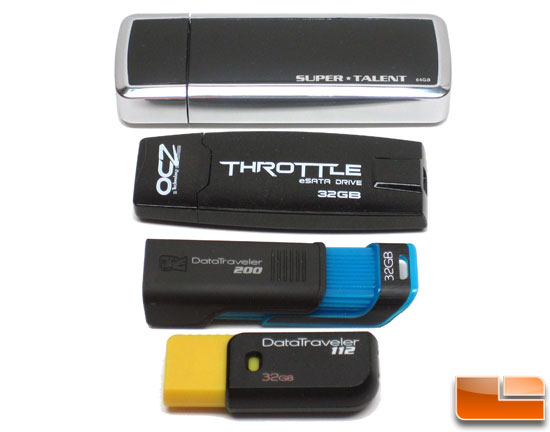 As you can see compared to three 32GB USB 2.0 and/or eSATA Flash drives the Super Talent RAIDDrive dwarfs them all! Why is it so large? It’s because inside there are two SATA SSD controllers, a USB 3.0 to SATA bridge chip and, of course, the MLC NAND Flash.  To get a better understanding of what was inside we asked Super Talent and they had this to say:

“Internally RAIDDrive has a USB 3.0 to dual channel SATA bridge chip and two SATA SSD controllers. So essentially it’s two SATA SSDs in a RAID 0 configuration. I’m not positive, but I think we’re using IndiLinx SATA controllers. Since there are so many chips (2 controllers, the bridge, plus up to 128GB of flash – 16 pcs of 64Gbit ICs) we have 3 PCBs stacked together. We chose to use two SATA controllers to reach top speeds. We also have two single controller designs, SuperCrypt and Express Drive, but they’re not as fast. Both single controller drives are cooler than the RAIDDrive. In a few months the Taiwanese controller companies will have a single chip USB 3.0 to Flash controller so we won’t have to use the bridge chips.” – Super Talent 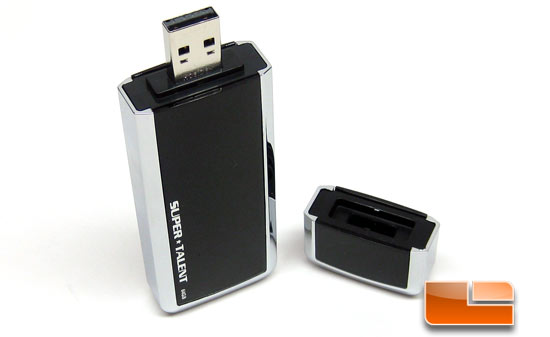 The RAIDDrive has an activity LED light in the end of it that is red on USB 2.0 ports and blue on USB 3.0 ports. The enclosure doesn’t have any holes in it for a key chain or lanyard, which is a little odd for a USB drive. For a device that costs hundreds of dollars make sure you keep a close eye on it!

Now that we know the basics of this SuperSpeed USB 3.0 Flash drive we can install the Super Talent USB drivers and then move on to benchmarking!