Bitcoin’s recent amazing price increase has helped raise awareness of other ‘alt coins’ and that has helped push up the value of Ethereum, litecoin and cryptocurrencies. Ethereum, the world’s second-largest blockchain by market size, is something we’ve been covering on Legit Reviews since June 2017. Ethereum (known as Ether or ETH) crossed the $750 mark for the very first time this week and that put it at up around 8,800% over the past year. These are unbelievable all-time highs and many feel that cryptocurrencies are here to stay and that this historic price surge still has some legs. At the time of writing, Ether (ETH) has pulled back slightly from the all-time high of $754.01 per ETH and was trading around $675. This is still puts ETH up over 100% in a month and over 8,000% for the year. If you want to get in on the cryptocurrency freight train you can either invest into it buy buying coins at any exchange or you can mine it with your PC. We’re a PC hardware site, so we’ve spent the past half year covering the mining of coins like Ethereum. 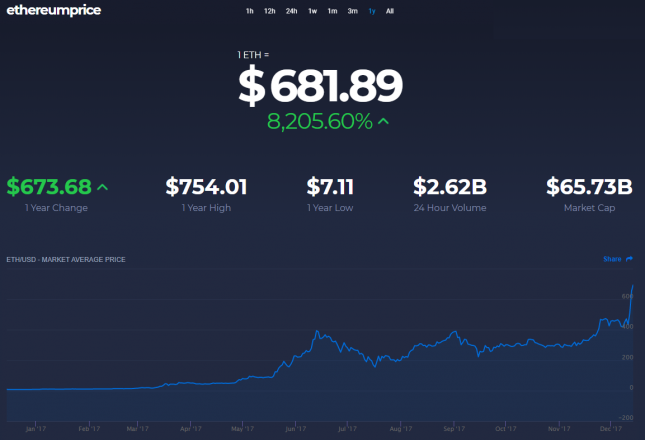 So, you want to mine Ethereum and gain some extra income? The recent price increase in Ethreum has increased the profit one can make from mining Ether, so people are back at looking how to set up a computer to mine Ethereum. Ether mining is done on the GPU inside a computer and the CPU and system memory is barely used. This means you’ll want to build a mining PC that has the most cost effective CPU and a motherboard that supports as many GPUs as you can fit. More on this later.

There are many ways to mine Ethereum, but we are going to give you a very quick overview of how to get mining in a matter of minutes.

Doing these three steps should take you about 10-15 minutes to complete at most on a system that already has Windows 10 installed with the latest GPU drivers.

Mining is fun and you’ll quickly find yourself addicted once you get your ‘money printing’ machine up and running. Mining with one or two cards won’t make you much money, so you’ll quickly find yourself wanting to make more money. For this you’ll need to build dedicated mining computer and find the best graphics card for mining the cryptocurrency that you are interested in. This is the part that we’ve been covering for over half a year, so please reference back to our original article that we published when Ethereum broke $250 for the first time. You can take those hashrates and plug them into online calculators like this one to see how much money you might be able to make.

Quick List of Hardware For a Dedicated Mining PC

Motherboard: You are looking for a motherboard that supports six to seven video cards. The Intel Z170 and Z270 motherboards for LGA1151 processors are the best deals right now. Our favorite board right for GPU mining is the ASUS PRIME Z270-A at $149.00 shipped. People are actually mining with eight video cards on the ASUS PRIME Z270-A motherboard thanks to an M.2 to PCIe 3.0 x4 adapter than can be had for $8.95 shipped. The ASUS Prime Z270-P for $119.99 shipped also works with 8 GPUs if you use two of the M.2 to PCIe 3.0 x4 adapters. If you only plan on running 6 or fewer video cards that board is afforable

Processor: For the Intel LGA1151 platform something like the Intel Celeron G3900 ($43.00 shipped) or an Intel Celeron G3930 ($43.60 shipped) would not be a bad choice. Both have a TDP of 51 Watts and come with a heatsink fan (HSF) that you can use. We highly suggest turning off the Windows 10 search indexing service (simple guide) on your dedicated mining rigs as that eats up power for something that isnt needed.

Power Supply: Your system is going to be running 24/7 at load, so youll want to drop some coin on a good model. We highly suggest an 80 PLUS Gold or 80 PLUS Platinum rated power supply that will handle the video cards that you’ll be running. Weve used the Enermax Platimax 1350W ($299.99 shipped) with good success on systems with 6-8 video cards like Radeon RX 580’s or GeForce GTX 1070’s as you’ll likely be pulling 800-1100 watts with a system like that. If you undervolting the GPU you’ll be able to reduce the systems overall power consumption you should be able to get away with a smaller power supply. The Seasonic FOCUS Plust series SSR-850FX 850W power supply is 80+ GOLD rated and $115.00 shipped. Not bad as it comes with six PCIe 6/8 pin connectors and 10 SATA connectors. If you plan on running two power supplies on one system you might want to pick up a dual power supply connector to power up and shut down both power supplies like normal.

Storage Drive: Small and inexpensive is again the name of the game here. You likely dont want to use a M.2 PCIe graphics card as some boards will disable PCIe slots when a M.2 PCIe SSD is inserted into the board. If you dont care about brand names or how easy it is to RMA if it breaks the DREVO X1 Pro 64GB SSD at $39.99 shipped is cheap and will hold an OS.

Riser Cards: Most go with USB powered 1x to 16x riser cards. These sell out often and they are mostly all made by companies that no one has heard of. The reviews on most are mixed, so youll just need to pick some and roll the dice. Youll likely be paying around $8 each. It is highly advised by the mining community that you don’t use SATA to PCIe power adapters, but a good number of people run SATA to 8-pin PCIe power adapters to connect all the video cards.

Case: Get creative and make your own! Our favorite GPU mining builds are done using milk crates, some PVC pipes and zip ties. The might not look fancy, but they cost under $15 to make.

Mouse/Monitor/Keyboard: Whatever is cheap! The AmazonBasics wired keyboard and mouse is just $14.00 shipped.

OS: Windows 10 works and is essentially free if you try out the trial.

Electricity Power Usage Meter: We highly suggest picking up a Kill-A-Watt P3 P4400 or P4460 power usage monitor to see how much power your system is using. This will allow you to calculate your bills and dial in your GPUs by lower the power usage to your liking. It will also keep you from burning your home down. Keep in mind that a 20 Amp breaker is only designed to have 16 Amps of continuous power and a more common 15 Amp electrical breaker is designed to have at most 12 Amps of continuous load.

Power Cord: Are you building multiple systems or plan on putting them in a garage or basement? You might need a heavy-duty power extension cord to get to the power outlet or split systems up between breakers.

Video Cards: AMD Radeon RX 470/480 and Radeon RX 570/580 video cards are all the rage right now when it comes to ethereum mining, but they are extremely tough to find since they are all being bought to mine ether.

If you need hardware help or suggestions please ask in the comment section below! 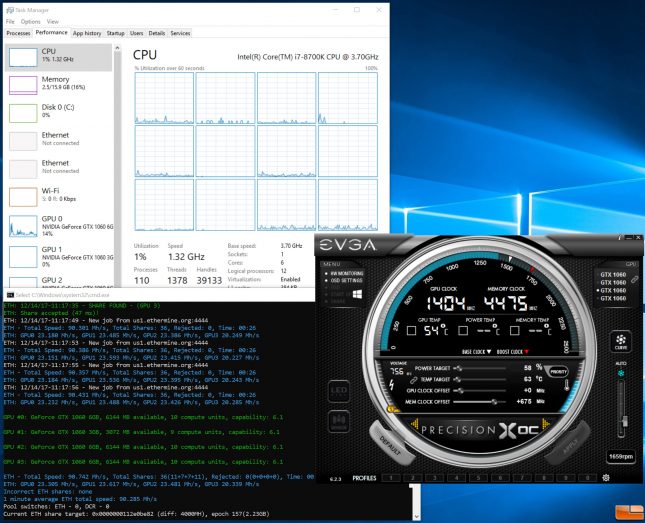 We are running a high-end Intel Core i7-8700K Coffee Lake processor ($404.00 shipped) on a Gigabyte Z370 Gaming 7 motherboard ($219.99 shipped) with four NVIDIA GeForce GTX 1060 graphics cards (starting at $205 each). When we run the Ethereum mining program on all four cards the only 1-5% of the processor is being used at any given time. An Intel Celeron G3900 ($43.00 shipped) or an Intel Celeron G3930 ($43.60 shipped) would be much better choices here due to their lower price. We’ve tried to save power by lowering the power target down to 58% and have overclocked the memory on the cards to 675MHz for a better hashrate. Using Claymore’s Dual Ethereum AMD+NVIDIA GPU Miner v10.2 we are able to get around 24.3 MH/s from each GeForce GTX 1060 6GB video card and 20.3 MH/s from the GeForce GTX 1060 3GB. We are big fans of these cards as they are easy to find and they only have one 6-pin or 8-pin PCIe connector on them. 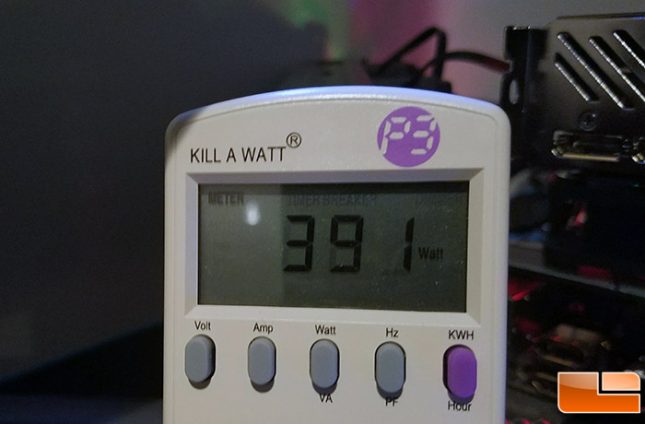 The total system power configured like this was fluctuating right around 390 Watts at the wall, which is great for four NVIDIA GeForce GTX 1060 cards to be mining.

If you are able to pick up four NVIDIA GeForce GTX 1060 6GB video cards at $240 each you’ll be getting about $295 in ETH per month before electricity costs. At around $0.10 per kWh you are looking at $28 a month in electric to run this rig 24/7. At the current ETH price, DAG Epoch size, difficulty level, mining pool size, mining reward and transactions a day you are looking to bring in around $261 of profit per month on .435 Ether or $3,100 a year after electric costs with a rig like this. To pay off the $960 in graphics cards you are looking at 4 months and obviously longer than this if you needed to go out and build an entire mining system. Keep in mind that the hardware in your mining rig will still have value when you are done with it, so when you sell your hardware you’ll be able to recoup some of the startup costs. If you know about how much money you want to make in a year you can use online mining calculators to see how many and what model cards you’ll need to hit that mark.

Building a single system and sitting in your basement, garage or attic and forgetting about it might not be a bad idea right now. Those that have been mining for 6+ months that got in on this the last time it made headlines should easily be in the black by now. If you believe the price of Ethereum is going to continue to increase then you might want to hold (HODL!!!!!!) those coins and see what happens. To the moon!

Or if you want something simpler you can rent out your mining rig to a service like NiceHash, but we all know what just happened to them.